Interview: Developing a new immunotherapy to gain control of cancer 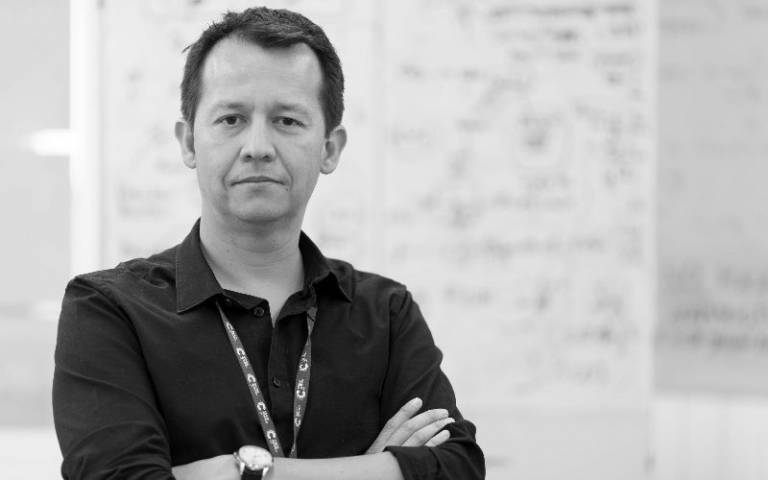 “This is not the cure to cancer. I think that’s very important to clarify. But I think it’s the beginning of the long road to better cancer immunotherapy.”

Professor Sergio Quezada has long been studying the complex relationship between the immune system and cancer at UCL – a field of research that’s moving rapidly and has already produced some stunning successes, with drugs known as immunotherapies now available for several types of cancer.

Quezada’s fascination with the immune system has culminated in not only a potential new immunotherapy drug, but another paradigm shift in our understanding of how cancer immunotherapy works.

The latest study to come out of Quezada’s Cancer Research UK-funded lab at UCL, published in Nature Cancer*, outlines a new way to harness the immune system in favour of killing cancer cells. And it’s already led to early stage clinical trials.

This story of discovery began many years ago, decades in fact. And as Quezada comments, it‘s just the beginning.

The body’s immune system is tightly controlled. “When you think about the immune response to anything, you need to have stop and go signals,” explains Quezada.

Manipulating the balance between these stop and go signals to encourage a patient’s immune system to target their tumour has been a key focus of immunotherapy research, with most of the current immunotherapy focusing on so-called checkpoint signals, found on the surface of immune cells called T cells.

But that’s not the only way to target the immune system. Quezada is interested in the delicate dance between two different types of T cells – ‘effector’ T cells, that help to destroy potential threats, and ‘regulatory’ T cells, which aim to keep our immune system in check.

“So whenever you have an inflammatory response, with immune cells going and trying to attack or destroy a tissue, that is followed immediately, or almost immediately, by regulatory T cells that are there to calm things down.”

Regulatory T cells are vital to fine-tuning immune responses, but they’re also implicated in cancer. “In cancer, there are a good number of papers associating the presence of regulatory T cells to tumour progression and the poor survival of patients.”

Quezada believes manipulating the balance between effector T cells and regulatory T cells could be a good strategy – one that could lead to a new generation of immunotherapy drugs.

In order to produce an anti-cancer immune response in patients, researchers have been looking to build an immunotherapy drug that works by specifically reducing the number of regulatory T cells, without also affecting the crucial effector T cells.

“If you were to take down the regulatory T cells, but also eliminate the effector T cells, you end up on a zero sum, you end up with no effect whatsoever. So you always want to play with that balance. If you are able to take out or partially take out the regulatory T cells from the equation, it’s like moving a rock up the mountain, were you will be able to push the boulder down and initiate a cascade of events that will end up in tumour rejection. So, for us, it’s one of the holy grails of immune regulation that if you target properly, you can get tumour control."

In order to target regulatory T cells without affecting the number of other T cells, scientists looked for specific feature on the surface of regulatory T cells that will help to distinguish them from other types. This would then allow them to design an antibody that attached to that it, labelling it for destruction by other parts of the immune system.

“That has been difficult for many years, and many, many investigators and companies have been looking for specific markers of regulatory T cells. One of them was shown decades ago, in the mid 90s. And that molecule is called CD25. Everybody said, ‘Oh, this is a great target, it’s preferentially expressed in regulatory T cells.’” At this point, it seemed they had hit the jackpot.

But despite ongoing attempts, when it came to making the perfect antibody that could target the CD25 receptor, and thus deplete regulatory T cells and allow an anti-tumour immune response, researchers were stumped. None of the CD25 antibodies they tested was effective against cancer.

The excitement ground to a halt, and research into CD25 was largely put on the backburner.

But this is a story of persistence and dedication. Quezada and his team continued to investigate CD25, going back to the basics of how antibodies and immune cells behave. And they’ve finally got to the bottom of this stubborn mystery.

“The problem with all the experiments that have failed in the past is that the antibody that we’re using was the wrong antibody. The target was the correct, but the tool that we have all been using, it was absolutely wrong,” he says.

The problem stemmed from the fact that, as well as being present on regulatory T cells, CD25 is also found – in much lower amounts – on effector T cells too, where it forms part of an essential signalling process involving a messenger protein known as interleukin-2 (IL-2), which activates them and causes them to target cancer.

Quezada and his team hypothesised that the CD25 antibodies didn’t work well because, although they were destroying regulatory T cells, they were also simultaneously blocking IL-2 signalling, deactivating the vital effector T cells and preventing them from targeting the cancer cells.

The team at UCL set out to construct an antibody that still targets CD25 and destroys regulatory T cells. However, by sticking to a different part of the protein, it also manages to avoid blocking the all-important IL-2 signalling on effector T cells.

As it turns out, their theory was correct. “We made the antibody, we tested it, and it worked. It worked fantastically,” Quezada exclaims.

Not only did the antibody not interfere with effector T cells, Quezada says that it also creates a cascade of events that brings more cancer killing cells into the tumour, culminating in an even stronger anti-tumour response.

And what’s more, their results suggest that it prevented the tumour becoming resistant to immunotherapy – something that can be a problem for patients treated with current drugs.

So far, the results have been extremely promising, showing significantly improved long-term survival in mice with cancer. “A single dose of the antibody gave us near hundred percent complete responses in animal models.”

After success in the lab, the antibody is currently in phase 1 clinical trials, testing the safety of the treatment in humans, following preclinical safety tests.

But Quezada emphasises how the story doesn’t end here. There’s still much more to learn about CD25, IL-2, and how it sets off a cascade of anti-cancer immunity.

“Our role as scientists, especially as the laboratory that created the concept and the new antibody, is to dig deeper into the mechanism of response or resistance to this molecule in either mouse models or in clinical samples”.

“The same is happening now with other immunotherapy drugs.  Some of these molecules are approved for cancer therapeutics, but we still don’t know the full mechanism of action of those drugs.”

Ultimately, Quezada explains, if the new antibody proves to be safe and effective in clinical trials – and it’s a big ‘if’ – the drug could be used as part of combination approaches with existing therapies. But for now, Quezada and his team are eagerly awaiting the results of clinical trials that will put their new drug to the test in humans.

“If the antibody does in humans what it does in mice, then this is really going to change the landscape.”

This article was originally published as a Science blog by Cancer Research UK on November 9, 2020