Earliest example of a rapid-fire tongue found in extinct amphibians

Fossils of small armoured amphibians provide the oldest evidence of a slingshot-style tongue, according to a new study co-led by a UCL researcher. 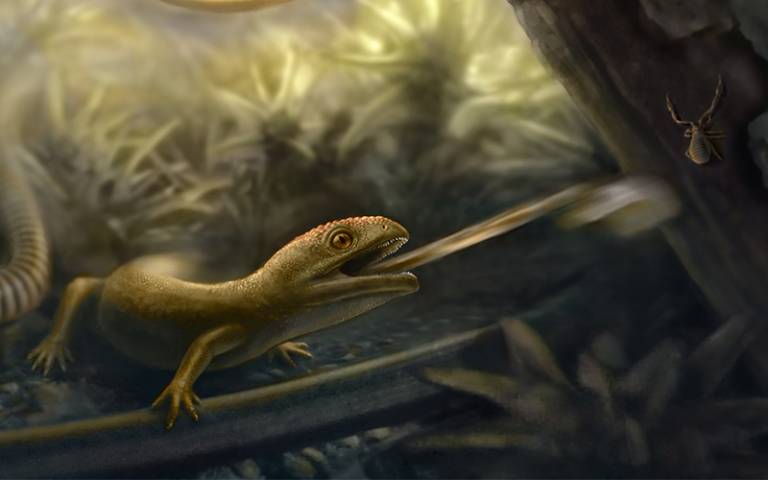 The research team analysed 99-million-year-old fossils to find that the animals were sit-and-wait predators that snatched prey with a projectile firing of their tongue, as reported in the journal Science.

Despite having lizard like claws, scales and tails, the ancient animals, knowns as albanerpetontids, were amphibians, not reptiles. Their lineage was distinct from today’s frogs, salamanders and caecilians and dates back at least 165 million years, dying out only about 2 million years ago.

The new findings redefine how these tiny animals are believed to have fed, as they were previously thought to be underground burrowers.

The fossils are the first albanerpetontids discovered in modern-day Myanmar and the only known examples in amber. Most albanerpetontid fossils are in poor condition, yet one specimen was in ‘mint condition’, say the researchers, enabled them to thoroughly investigate it. They conducted CT scanning, revealing fine-scale features obscured in the cloudy amber.

Study co-author Dr Edward Stanley (Florida Museum of Natural History) said: “This discovery adds a super-cool piece to the puzzle of this obscure group of weird little animals. Knowing they had this ballistic tongue gives us a whole new understanding of this entire lineage.”

The albanerpetontids’ stippled, reinforced skulls led many scientists to hypothesize they were diggers. One of the new fossils, a tiny juvenile, was in fact previously misidentified as a chameleon, which, despite being a reptile, shares features with albanerpetontids, such as claws, scales, massive eye sockets and – we now know – a projectile feeding mechanism.

The chameleon tongue is one of the fastest muscles in the animal kingdom. It gets its speed from a specialized accelerator muscle that stores energy by contracting and then launching the elastic tongue with a recoil effect.

While armed with a rapid-fire tongue, Y. perettii was tiny: based on the fossil skull, the researchers estimates the adult was about five centimetres long, not including the tail.

Professor Evans said: “We envision this as a stocky little thing scampering in the leaf litter, well hidden, but occasionally coming out for a fly, throwing out its tongue and grabbing it.”

Digitisation also enabled the researchers, scattered around the world and hunkered down during COVID-19 quarantines, to collaboratively analyse and describe the specimens – and then make the same material digitally available to others.

Researchers say, the revelation that albanerpetontids had projectile tongues helps explain some of their distinctive features, such as unusual jaw and neck joints and large, forward-looking eyes, a common characteristic of predators. They may also have breathed entirely through their skin, as some salamanders do.

Despite the level of preservation and completeness of the Y. perettii specimens, albanerpetontids’ exact place in the amphibian family tree remains a mystery.

Professor Evans said: “In theory, albanerpetontids could give us a clue as to what the ancestors of modern amphibians looked like. Unfortunately, they’re so specialised and so weird in their own way that they’re not helping us all that much.”