A 68 million-year-old fossil of a crow-sized bird discovered in Madagascar offers new insights into the evolution of face and beak shape of modern birds’ ancestors, according to a new study involving UCL researchers. 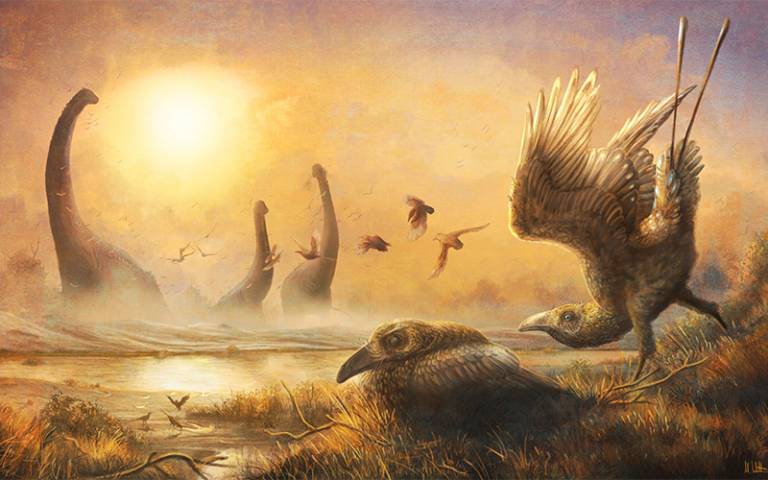 The findings, published in Nature and carried out by an international team led by Ohio University and Stony Brook University, are helping scientists to understand convergent evolution of complex anatomy.

The bird has been named Falcatakely, a combination of Latin and Malagasy words inspired by the small size and the scythe-like shape of the beak, which represents a completely novel face shape in Mesozoic birds.

“This new discovery tells us even more about how the predecessors of modern birds evolved, by showing how different forces in different places can contribute to similar traits in distantly related animals.”

The species is known from a single well-preserved and nearly complete skull that was buried in a muddy debris flow around 68 million years ago in the late Cretaceous age (part of the Mesozoic era). The fossil was initially unearthed in 2010. Bird skeletons, and particularly their skulls, are rare in the fossil record because of their lightweight bones and small size.

Falcatakely is the second Cretaceous bird species discovered in what is now northern Madagascar by the National Science Foundation-funded team.

Although quite small, with an estimated skull length of only 8.5 cm, the exquisite preservation reveals many important details. As one example, a complex series of grooves on the bones making up the side of the face indicate that the animal hosted an expansive keratinous covering, or beak, in life.

Falcatakely belongs to an extinct group of birds called Enantiornithes, a group known exclusively from the Cretaceous period and predominantly from fossils discovered in Asia.

“Unlike the first birds, such as Archaeopteryx, with long tails and primitive features in the skull, enantiornithines like Falcatakely would have looked relatively modern.”

As the individual bones of Falcatakely were too fragile for the researchers to remove them from the rock into which they are still partially embedded, the team employed high-resolution micro-computed tomography (micro-CT) and extensive digital modeling to virtually dissect individual bones from the rock. Enlarged 3D printing of the digital models was essential for reconstructing the skull and for comparisons with other species.

The researchers found that the bird’s facial bones were organised quite unlike those of any dinosaur, avian or nonavian.

Professor O’Connor said: “Falcatakely might generally resemble any number of modern birds with the skin and beak in place, however, it is the underlying skeletal structure of the face that turns what we know about bird evolutionary anatomy on its head. There are clearly different developmental ways of organising the facial skeleton that lead to generally similar end goals, or in this case, similar head and beak shape.”

Dr Felice said: “We found that some modern birds like toucans and hornbills evolved very similar sickle-shaped beaks tens of millions of years after Falcatakely. What is so amazing is that these lineages converged on this same basic anatomy despite being very distantly related.”