This week we meet Noël Caliste, Executive Assistant within Library Services and co-chair of the LGBTQ+ Equality Advisory Group and Out@UCL. Here, Noël chats to us about organising UCL’s participation in the 2019 Pride in London march and working on a new rainbow UCL lanyard. 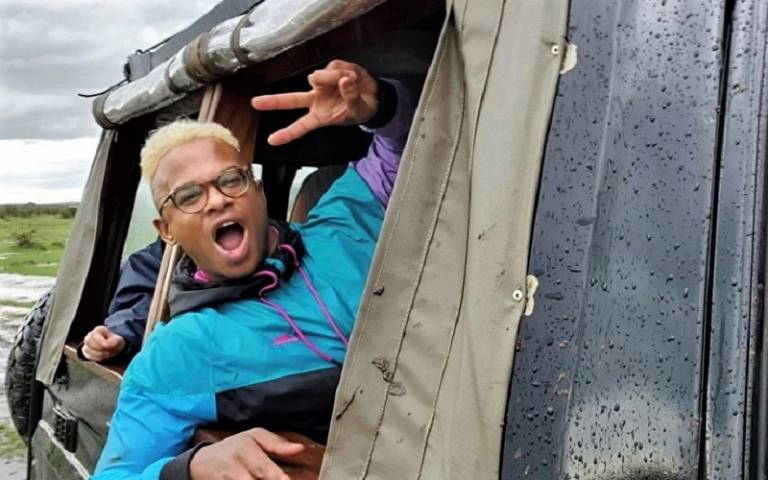 My role is as Executive Assistant within Library Services, supporting the Pro-Vice-Provost and members of the Library SMT in terms of diary support, meeting secretariat and general first point of contact, ensuring the smooth running of the office and as much as possible the wider Department.

I am also co-chair of the LGBTQ+ Equality Advisory Group (LEAG) and Out@UCL. The role is voluntary and I am honoured to have the opportunity to represent the UCL LGBTQ+ community as a queer black person. In recent years I have become very conscious of representation and visibility and this is an opportunity to bring a differing perspective to celebrate our differences, while trying to educate and inspire others (myself included).

I have been at UCL since November 2018. Prior, I worked at Imperial College London, having worked in the Education sector for over 10 years.

There are a few recent achievements at UCL that I am proud of, one of which was leading the organisation of UCL’s participation in the 2019 Pride in London march. It was the largest ever cohort from UCL and included postgraduate students, staff members and alumni. It was very satisfying to see my vision come to fruition on such a large stage and see so many people enjoy the day.

Another was working with my fellow LEAG committee members to write a statement in support of LGBTQ+ staff and students at UCL, because as a committee we strongly believe that addressing the current epidemic of violence, bullying, harassment and discrimination based on gender identity has to be a top priority at UCL. The statement was written to contextualise and strongly affirm the need for support of LGBQ+ and Transgender staff and students encountering challenges at work and in their studies due to their gender identity.

As part of my LEAG role I was invited to sit on the Equality Charters Group which was particularly interesting. It was fulfilling to be involved in a work-related project that valued my opinion, input and feedback, which my current day-to-day role doesn’t really allow.

I have been working on finalising a design for a UCL rainbow lanyard. The process has been in the works for a while as I wanted to ensure any rainbow lanyard was intended for the support of the UCL LGBTQ+ community while ensuring the design was inclusive. Being able to distribute these will definitely be something we can look forward to when eventually returning to campus.

Album: A Seat at the Table by Solange Knowles
Film: Moonlight
Novel: The Jurer by George Dawes Green

What do you call cheese that doesn’t belong to you?
Nacho cheese.

While the list could be longer I would sacrifice all others to have Serena Williams as my dinner guest.

Believe in yourself and your ability, especially when others may doubt you.

I was a Butler in the Buff for nine years.

The month of June is internationally recognised as Pride Month and this weekend in particular it would have been Pride in London (on the Saturday) and Black Pride (on the Sunday). While the events have been postponed this year I have been working with colleagues in the Division of Surgery & Interventional Science on the following slideshow to hopefully put a smile on your face.