About a sixth of London’s streets are wide enough to accommodate protected cycle lanes, amounting to over 2,000km of track that could be created quickly to improve safety as lockdown is eased, new UCL analysis has found. 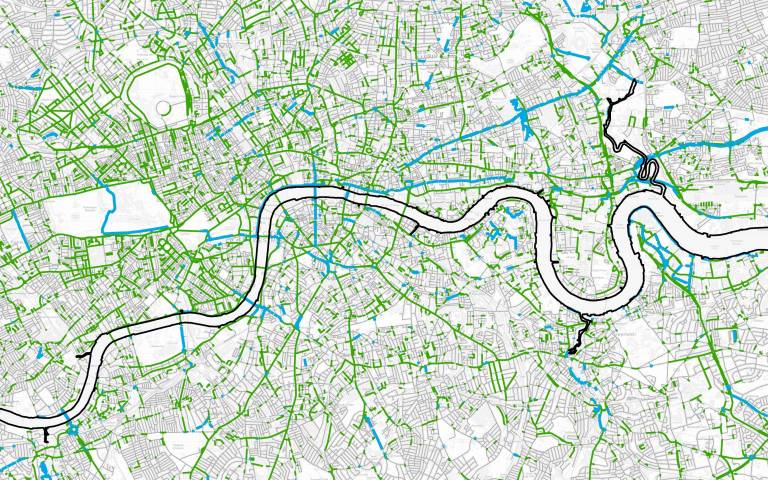 Looking at data for every street in Greater London, the researchers found that 2,357 km of streets were wide enough to implement a 2.2-metre cycle lane in each direction, while still allowing room for cars and other vehicles.

If these lanes were installed, it would lead to an eightfold increase of protected cycle routes in London, from the current level of under 2% of all London streets to 16%. TfL guidance recommends that cycle lanes should be at least 2.2 metres where possible.

Dr Ashley Dhanani (The Bartlett School of Architecture, UCL), based at the Urban Dynamics Lab, said: “Many Londoners want to cycle to avoid using public transport but are concerned about their safety when cycling on main roads. This new analysis shows there is plenty of space to create cycle lanes on key routes across the city.”

Among those identified as having enough space were six key roads providing long, continuous routes for commuters heading into central London. These were from Edgware Hospital to Marble Arch (A5), Elephant and Castle to New Cross (A2), Elephant and Castle to East Dulwich (Camberwell Road/A2216), Hackney Central to the Royal London Hospital (A107), and Regent’s Park to Manor House (A503).

Dr Dhanani said: “To accommodate an increase in cycling as lockdown is eased, it is not enough to install short sections of cycle lanes in a piecemeal fashion. Long, continuous lanes along key routes to key employment centres are essential to support the large numbers of people who are likely to want to cycle to work.”

Lucy Saunders, Director of Healthy Streets, said: “The Mayor, TfL and the London boroughs are implementing their plans to get Londoners cycling. This data shows the scale of what could be achieved over the coming weeks through simply marking out safe space for cycling on our street.”

Researcher Nicolas Palominos (The Bartlett Centre for Advanced Spatial Analysis, UCL), said: "The challenge of balancing street space is not new. Like other cities, London has a real opportunity to create a comprehensive cycling network. This would both make cycling convenient and attractive and achieve concrete progress in promoting sustainable urban mobility."

Researchers examined the make-up of street space in Greater London to identify all streets wide enough for new cycle lanes. The original analysis of street space, carried out by PhD student Nicolas Palominos, was based on data from the Ordnance Survey, the UK’s national mapping agency.

They determined that, to accommodate 2.2m cycle lanes on each side, a road would need to be at least 11 metres wide, giving 3 metres of space in each lane for cars and other vehicles and 0.6m for low kerbs or protective barriers separating the cycle lanes.

The project received funding from the Engineering and Physical Sciences Research Council (EPSRC) and the Bartlett Innovation Fund and was a collaboration between UCL researchers and two organisations, Healthy Streets and Tranquil City. Healthy Streets supports organisations to implement the Healthy Streets Approach to city, street and transport planning. Tranquil City is an organisation exploring our relationship with tranquillity in the urban environment to promote health, wellbeing and balance.

A map highlighting the areas of potential track can be viewed at underscorestreets.com.