Whale skulls are wonkier than ever

The skulls of toothed whales have become more asymmetric over time, according to a new study led by UCL and the Natural History Museum in London. 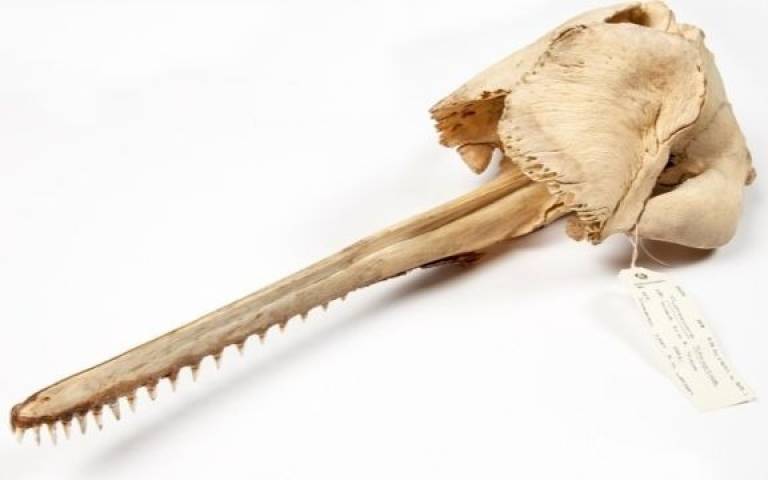 The team also found that early ancestors of living whales had little cranial asymmetry and likely were not able to echolocate, in the findings published in BMC Biology.

The study used the skulls of 84 living and 78 extinct cetaceans from 50 million years ago to living whales. 34 of the specimens used, were from the Natural History Museum's collections. The team used three-dimensional geometric morphometrics and phylogenetic comparative methods to reconstruct the evolution of asymmetry through to living whales. The research is the most comprehensive study to date, spanning the evolutionary history of cetaceans.

“Scientists are aware that toothed whales have asymmetric skulls; they are one of the only groups of animals on the planet that have asymmetry as the natural condition of the skull. The reason for this is because they echolocate, they have a lot of soft tissue which allows them to create sound for echolocation. Gradually as the soft tissue has evolved it has caused the skull to evolve, hence the wonky asymmetry.”

The scientists found that mysticetes, cetaceans such as the Natural History Museum's iconic blue whale, Hope, have maintained a low level of cranial asymmetry since their origin. They found that if asymmetry reflects ultrasonic sound production ability, it is unlikely that mysticetes were ever able to echolocate.

Researchers noticed asymmetry appearing in the skulls from around 30 million years ago. The scientists found that cetaceans with wonky skulls such as narwhals, Ganges river dolphins and sperm whales have developed specialist echolocation to hunt and survive in their such niche habitats such as shallow icy waters and deep oceans. Their echolocation ability may have led to their skulls becoming more asymmetrical.

Ellen Coombs continued: “We looked at what was happening around the time of these big symmetrical baleen whales diverging from the asymmetrical toothed whales around 39 million years ago. It's known that archaeocetes, the earliest whales of 50 million years ago, had wonky rostrums possibly a distortion of the fossils, but potentially related to directional hearing in order to hear underwater. This is lost in early neocetes - the taxon including the most recent common ancestor of living cetaceans.

“It was unclear when nasofacial asymmetry evolved during the transition from archaeocetes to modern whales, but we think it started to appear around 30 millions years ago. And perhaps toothed whale skulls and the overlying soft tissues will continue to get wonkier as their echolocation techniques become more specialized.”