The 2,600-year-old Heslington brain, discovered in 2008 near York in the UK, was probably so well-preserved due to tightly folded brain proteins, finds a new UCL-led study. 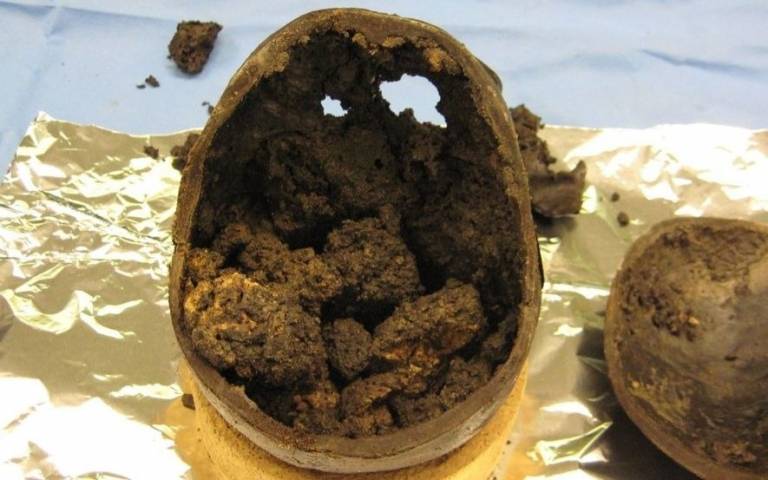 The brain matter was the only soft tissue that remained in the skull, which dated from around 673-482 BCE.

The new findings, published in Journal of the Royal Society Interface, suggest that the first few months after the person’s death may have been key to the extraordinary degree of brain preservation. In the absence of any experimental evidence it is less likely, but still possible, that a yet unknown disease may have altered the brain proteins prior to death.

Dr Petzold was interested in studying this brain as he had spent years pioneering research in two types of filaments in the brain – neurofilaments and glial fibrillary acidic protein (GFAP) – which act like scaffolds to hold brain matter together (much like the scaffold in a historic building), and he suspected that the proteins may have played a key role.

He and his team found that both these filament types were still present in the Heslington brain, suggesting they were involved in keeping the brain matter together.

Typically, brains decompose quite quickly after death in a rapid process of autolysis – enzymes breaking up the tissue. The research team speculates that these enzymes must have been deactivated within three months after this individual’s death 2,600 years ago, as they found in experiments that it takes three months for proteins to fold themselves tightly into aggregates if autolysis does not occur.

Their findings suggest that an acidic fluid could possibly have got into the brain and prevented autolysis, either as part of how the person died, or after his death. The person is suspected to have been struck in the head or neck or hanged, and subsequently decapitated.

Dr Petzold says that the findings about brain protein folding and unfolding could also have implications to biomedical research. The research team conducted an experiment to see how long it took brain protein aggregates to unfold themselves, and found it took a full year, which could imply that treatments for neurodegenerative diseases (which involve protein aggregates) may also need to consider a more long-term approach to tackling harmful protein aggregates. The unfolding of the Heslington brain proteins still triggered a strong immune response which was used in this study to generate novel antibodies.

The Heslington brain project was co-funded by the University of York and English Heritage.