You may have noticed that Jeremy Bentham's auto-icon has moved from the South Cloisters to the Student Centre. But how much do you know about him? 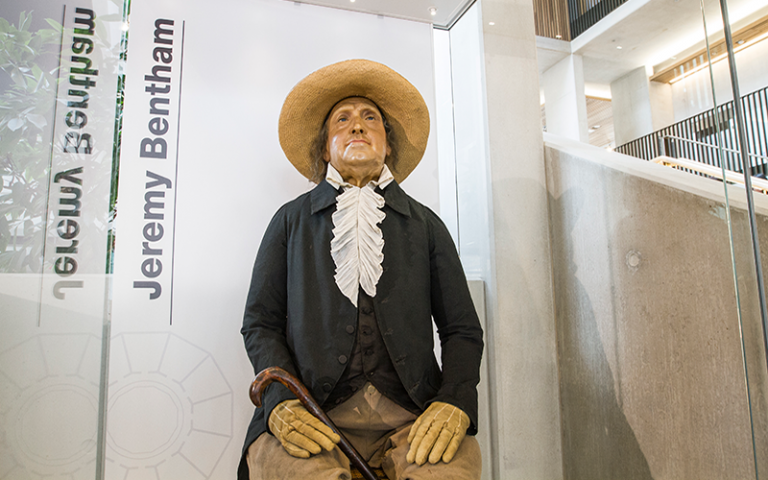 The life of a UCL student and Jeremy Bentham seem to go hand in hand. From giddy prospective students gasping at Bentham’s posthumous adventures, to rushing past ol’ Jezza just in time for a 9am class, he’s featured in the background of your UCL journey.

You may have noticed that Bentham has moved recently – from the corner of the Cloisters to a prime new spot at the Student Centre entrance. But how much do you know about him? Here’s my run-down of 10 things you might not know, but definitely should…

1. Bentham is NOT the founder of UCL

The myth of Bentham’s involvement in founding UCL has persisted for many years, probably helped by a mural depicting him among the actual founders of UCL painted by Henry Tonks in 1922. What Tonks was trying to convey was the impact of Bentham’s philosophies on the institution and its founders, rather than a literal patronage. You can see Henry Tonks mural in the dome above the Flaxman gallery in the main UCL Library.

Although Bentham was not one of the founders of UCL, many of them were his friends and followers—notably James Mill and Henry Brougham—who were inspired by his ideas.

Have you ever wondered who coined the words ‘maximise’ and ‘minimise’? Like many prolific writers, Bentham sometimes had to create his own terms to describe concepts he explored. Ranging from the common ‘international’, to the rare ‘scribblatory’, Jeremy’s words infiltrate our language in their very own literary panopticon – you never know when a Bentham original slips in.

3. Jeremy’s body is displayed at the heart of UCL campus

Well, maybe not his whole body. In his will, Bentham left his body to be dissected by Dr Thomas Southwood Smith, resulting in the ‘auto-icon’ which contains his skeleton, dressed in his clothing. Bentham’s actual head was considered too gruesome to display, after mummification attempts by Southwood Smith rendered the skin of his face too fragile and disturbing. Some of us have had the misfortune of bumping into Jezza’s severed head while it was on display in the Octagon gallery, and it’s safe to say we much prefer the wax head residing on top of his skeleton to the real thing.

4. Jeremy was a disruptive thinker

Bentham was a supporter of universal suffrage and the decriminalisation of homosexuality, many years before the two issues were resolved in British society. His work on Utilitarianism, law reform and animal welfare are only a few of his achievements which reflect his incredibly progressive thinking.

5. He wrote a prison cook book…

…or rather he had someone collect a series of recipes, apparently destined for use in the panopticon prison’s kitchen! Jeremy Bentham’s Prison Cooking: A Collection of Utilitarian Recipes – whose publication was supported by the Bentham Project and the UCL Centre for Publishing – contains what could be considered suitable for a panopticon kitchen meals, designed to maximise nutritious value without raising costs. Among the unpublished panopticon manuscripts in the Bentham Papers are several sheets containing recipes for vegetable and meat dishes, puddings, soups, and bread. The cost of the ingredients for each dish have been itemised, down to the amount of labour required to make each one. The manuscripts are in the hand of an unknown copyist, and were copied from 24 to 26 January 1796.

So instead of grabbing a supermarket meal deal, next time consider preparing Jeremy’s liver and ‘bonejelly’ soup!

6. Jeremy may have been the earliest jogger

Bentham appears to have been a regular jogger—or, as he put it, ‘circumgyrater’. According to the journalist George Wheatley, who stayed with the eighty-one year-old Bentham in March 1831, before both breakfast and dinner Bentham would take ‘a few turns in the garden, which … he calls circumgyrating’, which Wheatley described as a ‘trotting or taking up a kind of trotting step’.

7. Bentham was a dedicated writer

Jeremy produced around 20 pages of manuscript writing every day until his death; overall, he produced around 100,000 pages which are held at the UCL Library Special Collections. Further manuscripts can be found in the British Library, mostly consisting of Jeremy’s correspondence. The Bentham Project, based in the Faculty of Laws, aims to transcribe his works and put them into volumes for future publishing, ensuring Jeremy’s legacy continues.

8. He was a child prodigy

Just in case this list hasn’t already given you an inferiority complex, Bentham started studying Latin at the age of three, and by twelve years old, he was enrolled at Queen’s College in Oxford to follow in his father’s footsteps and study law. Not accomplished enough? Bentham was also a dab hand at the violin, harpsichord, piano, and the organ.

9. Jeremy was an atheist

Bentham believed that religion had no business interfering with morality or the creation of laws, and thought talk of the supernatural made no sense, which has led some people to speculate on the motive for preserving his body as an auto-icon. Burials in a church require payment, and rather than contribute to lining the pockets of an institution he did not believe in, perhaps he preferred to pose one last philosophical question to the public: why does religion determine socially acceptable ideas of life and death?

Despite popular belief, Bentham’s head was never used as a football by King’s College students in the ‘70s, nor does he attend every UCL Council Meeting. There’s no reason to be disappointed, though, for every myth holds at least a grain of truth within it! Jeremy’s head was kidnapped and held for ransom (a £10 donation to a charity of the King’s College students’ choice), and in 2013 the auto-icon did attend, as a surprise, a former provost’s final UCL council meeting.