This week we meet Dr Anna Garnett, Curator for the UCL Petrie Museum of Egyptian and Sudanese Archaeology, who gives us a sneak peek of the new addition to the Museum going on display in the New Year. 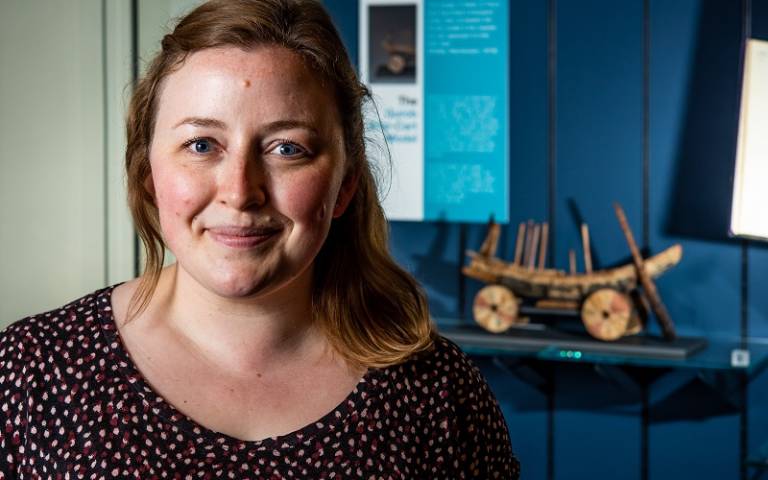 I’m the Curator for the UCL Petrie Museum of Egyptian and Sudanese Archaeology, part of UCL Culture, which is one of the most important (and largest) collections of ancient and modern Egyptian and Sudanese objects anywhere in the world. It’s a real jewel in UCL’s crown! In my role, I care for this collection of over 80,000 objects and ensure that it is accessible for research, teaching and public outreach.

I’ve been at UCL for almost four years now, and in the past I’ve worked across other University museum collections as well as national and local museums. My previous role was Project Curator at the British Museum, focusing on the excavation, study and publication of an ancient town called Amara West in northern Sudan, inhabited more than 3,000 years ago.

Successfully completing my PhD in Egyptology after ten years of part-time study, when I was working full-time and spinning lots of other plates.

We’ve recently redeveloped the Petrie Museum’s entrance gallery (with generous funding from the DCMS Wolfson Museums and Galleries Improvement Fund) which reopened in February 2020 – just before the Spring lockdown! I’m currently working on the final touches to the gallery, including the research and publication of a recent donation of a rare Pre-Raphaelite drawing of the archaeologist Hilda Petrie which will go on display in the New Year.

Go out walking in the Lakes more – make the most of growing up in that amazing place and try not to take it for granted.

I’m the proud descendant of many generations of Lake District sheep farmers, and I am fascinated by the old Cumbrian dialect (which my grandparents and great-grandparents spoke).

I have two, which I love in equal measure. The South Lakes (home) and Tell el-Amarna, the royal city of King Akhenaten and Queen Nefertiti in Middle Egypt, where I am privileged to work in the field.