Early signs that a patient’s lung cancer may spread and become untreatable can be picked up in samples of their blood and tumour, according to a trio of papers co-led by UCL. 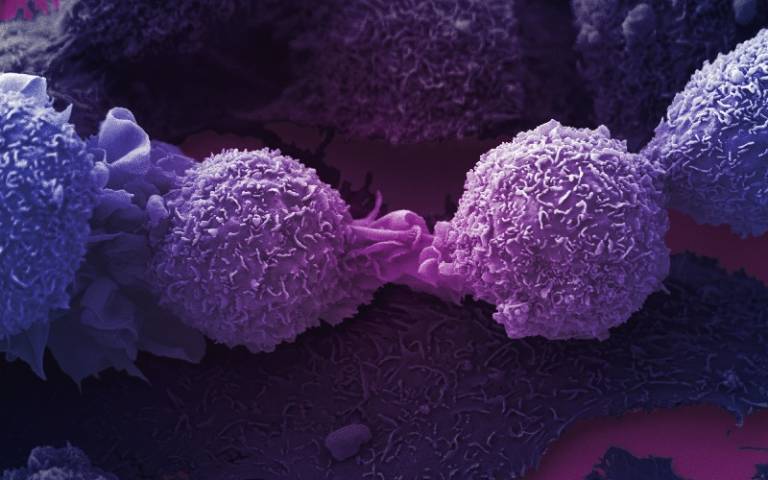 The three studies, published in Nature Medicine, are all part of Cancer Research UK’s £14million TRACERx project, which aims to understand how lung cancer cells change over time and become resistant to treatment.

Together, the new findings provide clues as to which patients could be safely treated with milder therapies, such as surgery alone, and which may need additional treatments including chemotherapy. The discoveries could also help researchers develop new ways to treat the more aggressive forms of lung cancer.

Around 47,000 people are diagnosed with lung cancer in the UK each year and fewer than one in five survives for five years or more. Researchers believe a key reason why so few people survive lung cancer is that the tumour cells rapidly evolve, developing resistance to current treatments and evading the body’s immune system.

TRACERx, which involves over 750 patients from 13 UK hospitals, is examining how lung cancer cells evolve and spread via the blood, as well as how the body’s immune system responds.

In one of the new studies*, MBPhD student Dhruva Biswas, Professor Charles Swanton (both UCL Cancer Institute and Francis Crick Institute) and colleagues studied lung tumour samples and found signs as to which cancers were more likely to return after treatment, independent of clinical measures such as size or stage.

Doctors already use single biopsies taken from tumours at the point of diagnosis to help select the best treatment plan for each patient. However, previous research has shown lung tumours are genetically unstable and evolve over time. This evolution means that the populations of cancer cells within an individual tumour may differ in different parts and from biopsy to biopsy, limiting a doctor’s ability to provide patients with an accurate prognosis.

Dhruva Biswas said: “To get over this issue, we’ve developed a new technique called ORACLE. ORACLE uses our understanding of tumour evolution to look for stable genetic features that we can find throughout a tumour. This is paired with a machine learning algorithm to identify features that predict how aggressive a tumour is likely to be.

“These features could be spotted no matter which part of the tumour is sampled for testing meaning they could be a more accurate guide for predicting the future clinical outcome for patients.”

Professor Benny Chain (UCL Infection & Immunity and UCL Computer Science) led another study**, focusing on lung cancer patients’ immune systems. Again looking at tumour biopsies, the team found that cells of the immune system called T cells were gathered among the cancer cells. This suggests that the patients’ immune systems were recognising and trying to fight the cancer. They also analysed these cells to see what was unique about the ones able to recognise cancer.

Professor Chain said: “Each lung tumour is made up of a mixture of different cancer cells, which we suspect is helping lung cancer to confuse our immune system and hence grow more quickly. However, our research shows that T cells are still able to spot the cancer cells.

“We now think that watching a patient’s T cells in action against lung cancer could give us clues as to how well a treatment is working for that individual patient. Our research also suggests the possibility that specific groups of T cells from patients could be isolated and adapted to help treat their tumour more effectively.”

For the third study***, a research team led by Cancer Research UK Manchester Institute, University of Manchester, and also involving UCL researchers, sought to find out if they could predict whose lung cancer would come back after treatment.

Just before surgery to remove lung tumours, the team took samples of patients’ blood from veins running away from their affected lungs. They searched the blood samples for cancer cells that had escaped from the tumour site and looked at the number and types of these cells.

Lead author Professor Caroline Dive (University of Manchester) said: “We monitored the patients for up to four years and found that those with the most tumour cells in their blood samples taken from the site of the tumour were also the ones most likely to suffer a recurrence.

“By looking at an individual patient who unfortunately had their cancer come back and spread ten months after surgery, we were able to identify the possible cause. We traced the origin of the secondary tumour to particular cells that were escaping into the blood from the primary tumour at the time of surgery.”

Professor Swanton, Cancer Research UK’s chief clinician, leads the TRACERx project, and said: “Our research has shown that lung cancer is an extremely complicated disease with a patchwork of different cells making up each individual tumour. We think that understanding this variation, how these different cells come about and how this variation is detected by the immune system will be key to improving lung cancer survival.

“Thanks to these findings we know much more about how lung cancer changes, spreads and evades treatment. As our collaboration continues, we will build on these discoveries, ultimately developing tests to guide and improve the way lung cancer is treated in the future.”