Dr Diana Georgescu, Lecturer at UCL School of Slavonic and East European Studies, writes that Greta Thunberg divides opinion due to deep-seated beliefs that childhood is an age of innocence and being dependent on adults. 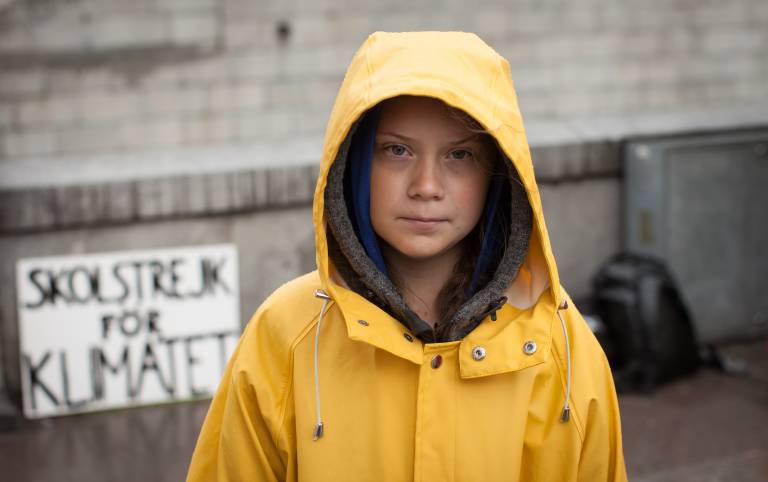 Greta Thunberg in particular has polarised audiences, attracting not only overwhelming support, but also aggressive right-wing attacks mocking her Asperger’s syndrome or comparing her to Aryan child figures in Nazi propaganda. Critics on the left have mostly avoided personal attacks, focusing their ire on the perceived “elitism” of the teen’s environmental activism and warning that the extensive media attention has turned her into a manufactured attraction.

The polarisation is not down so much to political divide. Rather, the split in opinion is due to our deep-seated belief that childhood is an age of innocence and being dependent on adults, a time that aligns with the private, not the public and political sphere. Before the 1800s few adults held this view: it only gained acceptance with the rise of the middle-class in the nineteenth century.

Liberal governments came about in parallel with the industrialisation of Europe and the US in the nineteenth century. But the liberal order, which held that values like freedom, individuality and equality were universal human rights, was also founded on the gendered division of private and public spaces.

Men, who were guaranteed individual freedom and equality, controlled the public and political space, while women and children, who were envisioned as “natural” subordinates, belonged in the private sphere.

Therefore, children staging street protests have signalled, for both supporters and critics, a world turned upside down. To delegitimise children’s protests and put youth back in their “natural” subordinate place, right-wing US commentators wondered if “Greta needs a spanking or a psychological intervention”, while conservative UK ministers accused young people of being “truants,” and former prime minister Theresa May complained about their “wasting lesson time.”

Critical reactions to Greta Thunberg’s activism also signals another cause of anxiety. The nineteenth-century notion of private childhood gathered momentum after the Second World War, when emerging theories of totalitarianism associated both Nazism and Communism with the destruction of private life and the mobilisation of youth in “totalitarian” regimes, making the family seem the only bulwark against collective regimentation.

For some critics, the brazen use of childhood as a political pawn in the recent youth protests raises the spectre of collective regimentation and youthful manipulation. Right-wing conspiracy theorists, for example, claimed the teenager was funded by liberal American philanthropist George Soros, or that she was co-opted by left-wing movements like Antifa. Similarly, left-wing critics warned that Thunberg would be used by neoliberal states and corporations as a symbol to rebrand their practices and products as environmentally friendly, i.e. politicians posing with her in photos, to legitimise some of their policies.

And yet Greta Thunberg’s or Malala Yousafzai’s acts of teen autonomy and precocious engagement in politics are neither “unnatural” nor unprecedented in contemporary history. In the US, child textile workers joined Mary Harris “Mother” Jones on a three-week march against child labour in 1903 and African-American children marched for equal rights in Alabama in 1963. The 1989 revolutions in Eastern Europe were similarly driven by youthful actors.

Like the child activists of the recent or distant past, Greta Thunberg has turned her youth into a political weapon, inadvertently exploiting a longstanding association of youth with redemption and renewal, an association that dates back to the French Revolution.

It is precisely because of their presumed innocence that youth seem to rise above the level of politics as usual, corrupted by ideological struggles and financial interests, to assume the symbolic power of change and transformation in popular imagination. The rapid growth of Greta Thunberg’s followers, who have risen to over 6 million in the Fridays For Future strikes in September 2019, and the 250,000 people that participated in the climate protest she led in New York in September 2019, testify to the power of child activism. Even young US Republicans (under 45) seem to be listening to the message, expressing concerns over climate change in a recent CBS News poll.

We should welcome the kind of child activism that transforms youth symbolism into meaningful action. Child and teen protests for climate action taking place simultaneously around the world made visible the intergenerational injustice that traverses the social and economic injustice of climate change. Because it is the young generations and poor countries, with the lowest emissions of carbon dioxide in the Global South, that suffer the worst consequences of climate change. It is only fair that their voices are also heard.

This article was first published on the Independent on 29 October 2019.