Is Race Equality Real at UCL? 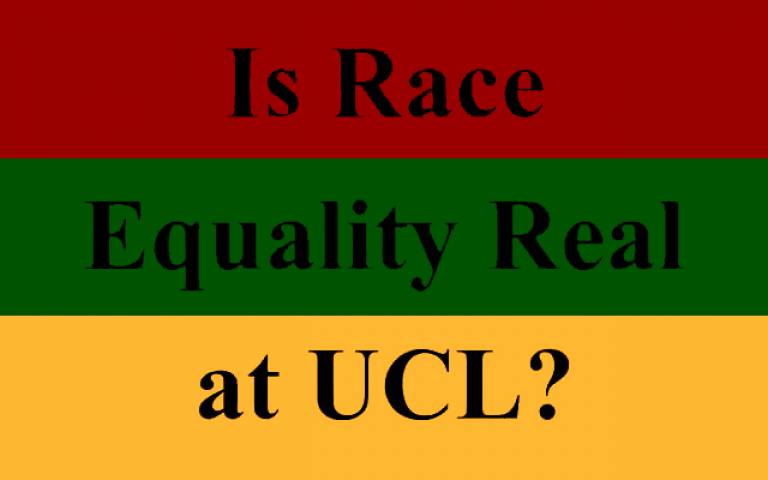 Students and staff from across UCL were welcomed on 21 October to discuss UCL’s progress on Race Equality at Is Race Equality Real at UCL?, an interactive event chaired by Ms Sandy Ogundele, Students' Union UCL BME Student's Officer, and co-organised by UCL’s Race Equality Steering Group and Students’ Union UCL. The event, which marks Black History Month 2019, aimed to take a look back over the last five years of institutional work on race equality at UCL, and invite discussion on the extent of progress made.

Professor Ijeoma Uchegbu (Professor of Pharmacy and the Provost’s Envoy for Race Equality) led the opening remarks, followed by speeches from panel members, who included Dr Mike Sulu, Co-Chair of the Race Equality Steering Group, Dr Kamna Patel, Vice Dean (Equality, Diversity & Inclusion) at The Bartlett, Ms Paulette Williams, Head of Student Success Projects, Ms Nilisha Vashist, UCLU Women's Officer and Professor Michael Arthur, UCL President & Provost. Following the panel speeches, the audience – consisting of members of the UCL community – were invited to share experiences and views, and the diverse mix of staff and students ensured conversations about race between both were incorporated in the discussions.

Results from the panel discussion and audience poll showed that the majority of those in attendance believe that there is work to be done on race equality at UCL, but recognise also the positive achievements that have been made. In addition, while there was no consensus on prioritising any particular element of equality, staff and students agreed on the necessity of educating others about the lived experience of people of colour, as well as empowering others to feel comfortable to have discussions that involve race.

The future of race equality at UCL is certainly promising, with the institution recently celebrating the opening of the new Centre for the Study of Race and Racism, of which Professor Paul Gilroy is founding Director, and launching key initiatives to support staff and students, including the BAME Awarding Gap, Inclusive Advocacy and Stellar HE. UCL's move East and subsequent increase in the size of both students and staff will enable further diversity and the emergence of new role models in key positions, as well as the greater inclusion of the student voice. It was agreed by both Professor Uchegbu and the Provost that UCL – like all other institutions – is institutionally racist, but by acknowledging this and working together to remove inequality, we can improve the institution for everyone.

Get involved in Race Equality work at UCL