Dr Lola Solebo and Professor Jugnoo Rahi (both UCL Institute of Child Health) have been awarded the Ulverscroft David Owen Prize by the Royal College of Ophthalmologists in recognition of their research into the treatment of childhood blindness. 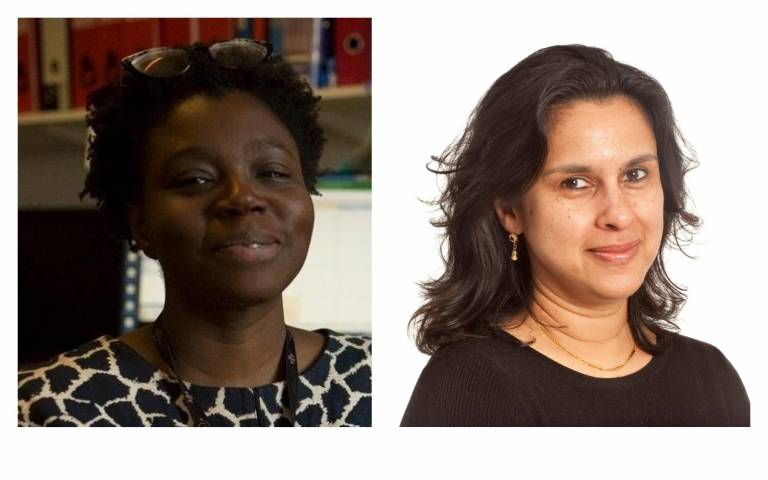 The prize is awarded for the best piece of research published in paediatric ophthalmology over the past three years.

Their study, published in Lancet Child & Adolescent Health, focused on the management of congenital and infantile cataract, the most common cause of avoidable blindness in children. It brought into question the widespread practice of inserting intraocular lenses (IoLs) in children under two years old to improve visual outcomes and reduce incidence of post-operative glaucoma.

The five-year IoLunder2 study, conducted through the British Isles Congenital Cataract Group (BCCIG), measured outcomes in children with IoLs for cataracts and found no independent association with either better visual outcomes or a reduction in incidences of post-operative glaucoma. In fact, the study found an increased risk of reoperation for visual axis opacity (VAO) – in other words a deterioration in the child’s sight.

Mike Burdon, President of The Royal College of Ophthalmologists, said: “The firm conclusions drawn by the IoLunder2 study will have significant impact for paediatric practice in the UK and further afield. This work is likely to prove important in the fight against avoidable childhood blindness for many years to come.”

The use of IoLs in children of this age is a much-accepted practice in paediatric ophthalmology despite the lack of a robust evidence base. Cogenital and infantile cataract is included as a World Health Organisation Vision 2020 priority and the impact of the paper, authored by Dr Solebo, Professor Rahi and Dr Philippa Cumberland (UCL Institute of Child Health) is likely to be significant and far-reaching.

On hearing the news of the award, Dr Solebo said: “It’s an honour to receive this award on behalf of my co-authors and the BCCIG. It’s a great boost to childhood eye research, and reflects the power of a collaborative, national approach to the investigation of outcomes for those with rare disease.”

The Ulverscroft Foundation was founded as a charity in 1973 to help visually impaired people. It supports research into the diagnosis and treatment of eye diseases, and funds medical equipment and facilities. One of its flagship projects is the Ulverscroft Vision Research Group, based at UCL. The foundation also funds eye clinics and hospitals in developing countries and supports organisations that improve the quality of life for vision-impaired people.

Funding for the study was provided by the National Institute for Health Research (NIHR), Ulverscroft Foundation, and the Academy of Medical Sciences.