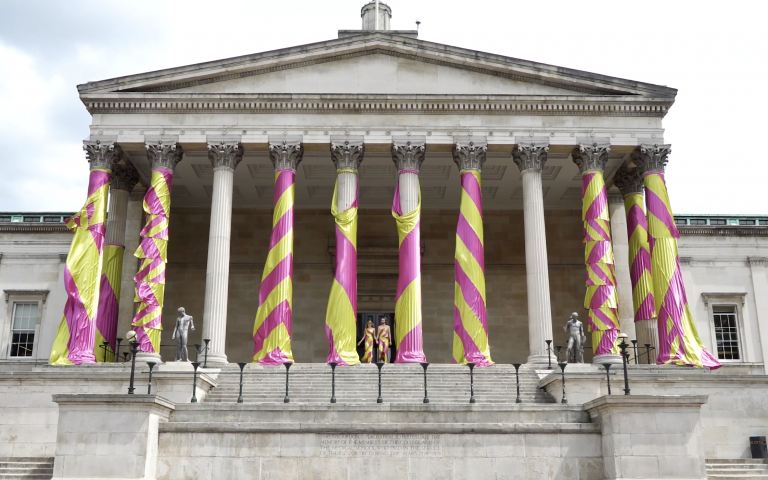 Boon & Baum is the collaborative duo of Joe Boon and Anna Baumgart, currently studying a Masters of Fine Art (MFA) in sculpture together at the Slade School of Fine Art, UCL.

For their final year showpiece, titled ‘The Bias’, the artists wanted to dress the large columns of the UCL’s Portico in grand bias-cut garments. The design references the 1930’s queen of bias Madeleine Vionnet, and the ‘dresses’ have a number of different design features including godets, cowl necklines, tiers and voluminous shapes.

However due to considerable costs the pair had to crowdfund and were amazed when Sir Paul Smith endorsed their art with a generous donation. They also received donations from UCL Business, The Eaton Fund, Gilbert Bayes Charitable Trust and their Kickstarter contributors.

‘The Bias’ is now on display for the Slade School of Fine Art degree show and consists of diagonally striped satin fabric in chartreuse and magenta, which adorn 10 of the 12 fluted columns. The stripes depict the 45°angle of the bias and reference the camouflage of 20th century ‘dazzle ships’ that were used extensively in World War I.

The sculpture aims to celebrate the history of UCL, with a nod to the diagonal decorations of the UCL fete of 1909, which took place in the main quad and featured a fair, dances, concerts and theatre over the course of three days.

Both artists graduated with Firsts from BA Fashion Design – Womenswear at Central Saint Martins. Drawing upon their fashion background, their work employs the language of fashion to experiment with notions of ‘dressing’ and ‘wearing’.

Boon & Baum, said: “We like to question what we wear apart from our clothes, and think about dressing beyond the body. Through ‘The Bias’ we intend to evoke ideas of uniform, invisibility, identity, camouflage and conformity, and to ‘dress up’ the institution. We couldn’t have done this without the support of many generous people, but we would like to give a special thanks to our parents.”

Sir Paul Smith, said: “I’ve been a longstanding supporter of the Slade and of art education more broadly and am delighted to be helping bring to life Joseph and Anna’s idea. What’s so brilliant about the installation they’ve done is that it seems so wrong to cover a classical building in fabric, I’ve always been a huge fan of doing the unexpected and of irreverence and the work does exactly that.”

A fashion icon and the Slade School of Fine Art

Sir Paul Smith is one of the most notable British fashion designers, knighted in the Queen's Birthday Honours list in 2001 for his services to British fashion.

His early encounters with artists were clearly instrumental in directing and building his fashion career. He is known to be an avid art collector and has attended Slade School of Fine Art Degree shows over the years. He has also supported students with the Paul Smith Scholarship at the Slade to foster new talent.

James Lloyd was one of the first students at the Slade he ever sponsored. The talented painter went on to win the BP Portrait Prize at the National Portrait Gallery and coincidentally was commissioned to paint Paul Smith’s portrait for the gallery.

Boon & Baum’s ‘The Bias’ sculpture will be on display until 16 June 2019. The portico is open to the public. Boon & Baum also have a space within The Slade, in which they will be performing their studio life every day until the 16th.