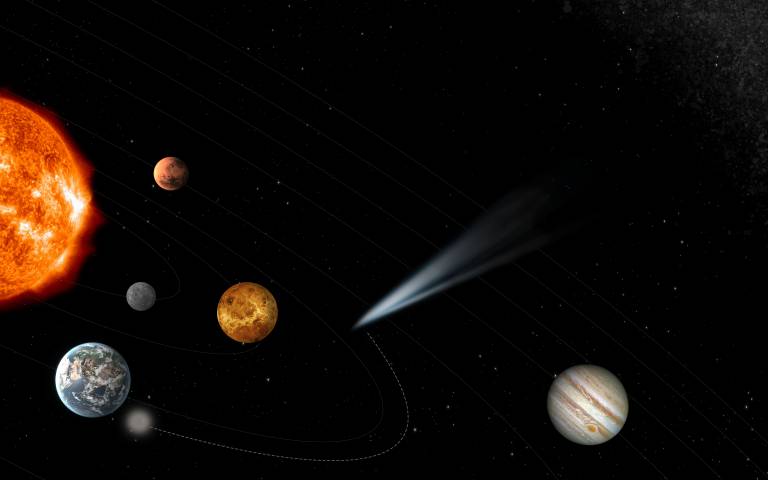 A second UCL-led proposal, Debye, has been chosen as the reserve mission for the same programme, beating competition from more than 20 submissions from across Europe.

Now entering the detailed study phase, Comet Interceptor aims to​ investigate a dynamically-new comet or interstellar object approaching the Sun for the first time to improve our understanding of the origins of our solar system and the wider universe.

Science Minister Chris Skidmore said: "Comet Interceptor sounds like something from a science fiction film but UK scientists are working to make it a reality in collaboration our partners in the European Space Agency. This new type of fast mission is a great example of how advances in space technology can bring benefits back to the science community. Our modern Industrial Strategy is ensuring that the UK takes these opportunities to lead the new space age."

In reserve, Debye, led by Dr Robert Wicks (UCL Space & Climate Physics), aims to use the first specialised ‘electron telescope’ to take the fastest measurements of electrons ever made in outer space to explore energy exchange and transport in plasmas.

This is key to understanding the energisation and acceleration of particles throughout the universe which impacts everything we see in space and astrophysics, from the unexplained million-degree temperature of the solar corona, to the mysterious ‘cooling-flow problem’ where plasma between clusters of galaxies is hotter than it should be.

Commenting on Debye being selected as first reserve mission, Dr Wicks said: “It is wonderful that two UCL-led proposals have been selected by ESA for the first F-Class mission and that one of these will launch with another UCL-led mission, ARIEL. It’s testament to the hard work of our world-leading space researchers and engineers who are operating at the forefront of knowledge and skill in building and operating space hardware.

“While it would be fantastic to see Debye launched to improve our understanding of the fundamental processes of plasma heating throughout the universe, we wish the Comet Interceptor team all the best with the next steps of their journey. It’s an incredibly exciting mission and they have our full support.”