A new specialised service for people with aphasia— speech and language difficulties following stroke, traumatic brain injury or brain tumours — is opening at UCLH, led by UCL academics and funded by The National Brain Appeal. 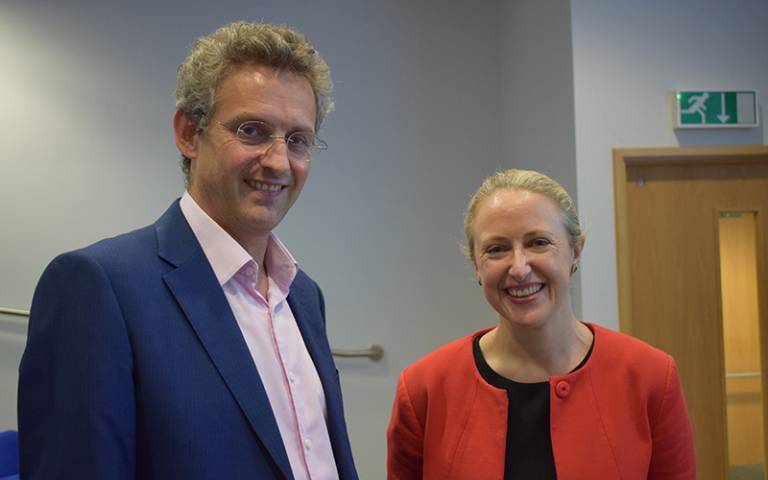 The service will be offering 100 hours of therapy to people who previously would only be receiving 12 hours, in line with research finding that more intensive therapy over a longer period of time is necessary for recovery.

Aphasia is an acquired communication disorder most commonly caused by stroke. It is estimated that there are more than 350,000 people living with aphasia in the UK.

“Patients may know what they want to say but they can’t grab the words, the network is broken and all areas of language — reading, writing, speech and understanding speech — are damaged,” said Professor Alex Leff (UCL Queen Square Institute of Neurology), who co-founded the programme along with Professor Jenny Crinion (UCL Institute of Cognitive Neuroscience).

“The National Brain Appeal Aphasia Programme will help patients re-learn language and join up these blocked routes,” he continued.

The charity is raising £600,000 to fund the two-year programme, thought to be the first of its kind in the UK, at the National Hospital for Neurology and Neurosurgery, UCLH.

Currently in the UK, people with aphasia receive, on average, four hours of speech and language therapy while in hospital followed up by eight hours once they have been discharged home. The new programme will provide personalised therapy for seven hours a day, five days a week for three weeks. Patients then continue with independent goal directed work at home to keep up their progress which the team will continue to monitor. Psychological support will be provided as well as involving family and friends in some sessions.

Aphasia can affect people differently, depending on what part of the brain has been damaged, but most people report finding speaking, listening, reading and writing challenging. Everyday activities like using the phone, internet or having a conversation can be a source of profound frustration and distress not only for the person with aphasia but also their families and friends. Many people lose their jobs, and the condition can lead to depression, anger and social isolation.

“It is never too late for the appropriate rehabilitation for patients with aphasia. We really want to get that message across,” said Professor Crinion.

She said that the first group of patients appear to be benefiting from the therapy.

“It is early days but we are already seeing very encouraging results. At the end of the three-week programme all made significant improvements in their language skills and achieved many of their short-term personal goals. This included things many of us would take for granted, such as being able to read a bedtime story to their kids, being able to phone their relatives and have a chat or ordering a coffee in a cafe. These gains have already made a big impact on their lives.”

Professor Leff continued: “The key to repairing this damage is the high dose of therapy. Studies have shown that even a dose of 40 hours does not generally lead to clinically meaningful gains. Currently NHS patients are only receiving 12 hours on average. Learning a foreign language, even a relatively easy one such as Spanish, takes around 300 hours; it makes sense that re-learning language after brain injury will need substantial time input.”

Theresa Dauncey, Chief Executive of The National Brain Appeal, said: “We work closely with clinicians to fund projects that have the potential to make significant improvements to the lives of patients with neurological disorders. Their ideas often just need a period of time to prove that they work to then, hopefully, be commissioned by the NHS. There is powerful evidence that high dose therapy for aphasic patients works and has the ability to transform their lives.”

A separate programme delivering the therapy spread out over many more weeks will be set up for those patients for whom the 100 hours over three weeks is not suitable.