Sophie Scott was the recipient of a Provost’s Award for Public Engagement in 2012 for a Summer Science Exhibition at the Royal Society called LOL, The Science and Art of Laughter. It led to a TED talk, an episode of Horizon and the Royal Institute Christmas lectures in 2017. 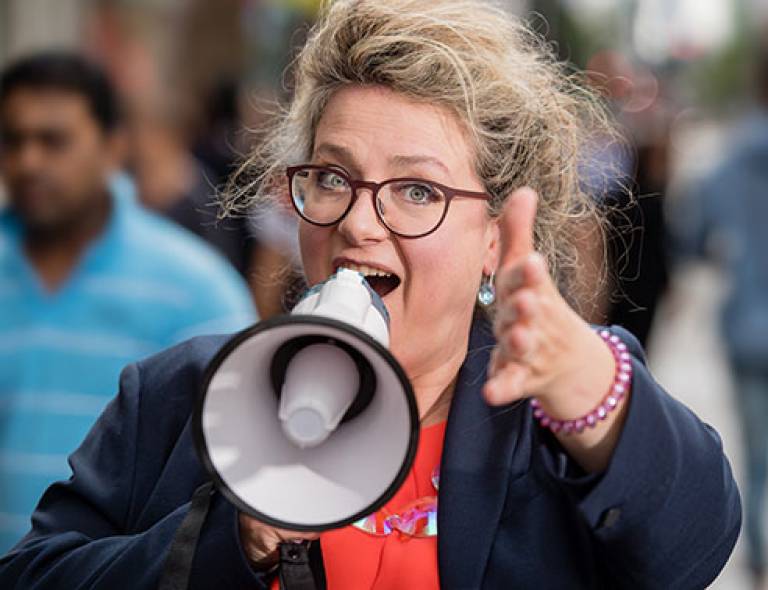 What is your role and what does it involve?
I’m a professor of cognitive neuroscience, and my research is into the neurobiology of human vocal communication.

How long have you been at UCL and what was your previous role?
I have been at UCL for twenty years, and prior to that I worked at the MRC Applied Psychology Unity in Cambridge as a scientific officer. When I came to UCL I applied for, and was awarded, a Wellcome Trust fellowship, and I was on that programme for several years.

You have previously won one of the Provost’s Award for Public Engagement here at UCL, what project was that for?
It was for a Summer Science Exhibition at the Royal Society in 2012 – called LOL, The Science and Art of Laughter, it was an exhibit where we explored the neurobiology of laughter, and we worked with loads of comedians to ensure that there was laughter going on, that we could investigate at the exhibit itself.

Has winning the award changed things for you?
It was lovely to have all the work acknowledged in such a prestigious way, and also I think it helps demonstrate that it is worth taking public engagement seriously. The LOL project itself has led to a TED talk, an episode of Horizon and the RI Christmas lectures in 2017, so it definitely was a good start!

Tell us about a project you are working on now which is top of your to-do list
Scientifically, I have been trying to improve our understanding of the neural control of vocalisations – like laughter. This is technically hard but extremely interesting.

What is your favourite joke (pre-watershed)?
What’s round and sounds like a trumpet?
A crumpet

What advice would you give your younger self?
Make time for the good days. Good days matter.

What would it surprise people to know about you?
I can ring church bells.

What is your favourite place?
Lancashire (all of it: Blackpool if you force me to choose a bit of it)

Nominations are closing soon for the Provost’s Awards for Public Engagement, get your votes in by 5pm, 28 January 2019.