A way of transporting tiny particles of graphite in liquid using magnetic fields has been developed by UCL scientists. 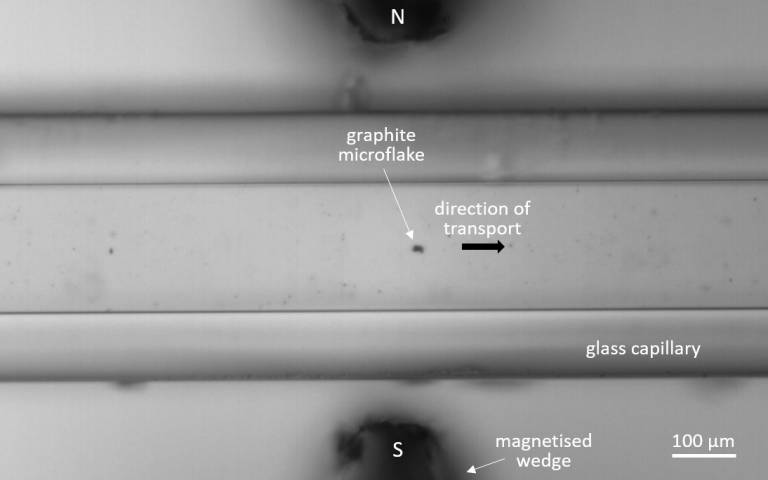 It opens up possibilities for new ways of precisely transporting specific components in fluids, including in biocompatible fluids such as in the human body.

The findings, published in Proceedings of the National Academy of Sciences, could have implications for improved chemical detection, non-invasive healthcare diagnosis and drug delivery via miniaturised devices or via small-scale robotic tools.

Transporting micro-particles, which are the size of a tenth of a human hair, in liquid is difficult due to the strong drag forces which are comparable to those at play when moving a macro-particle through dense honey.

The new method used a weak type of magnetism – called diamagnetism – to control the position of biocompatible graphite microflakes in liquid.

Diamagnetism had been used before, for instance, to levitate living frogs with very strong magnets, but the diamagnetism of micro-graphite had never been exploited for controlled motion in aqueous fluids before now.

The graphite flakes are a similar size or smaller than human cells and could be used to carry large molecules in a variety of scenarios. This replaces the need for costly microfluidic pumps, enabling simpler, cheaper and more reliable tools and sensing applications.

Moreover, graphite is composed solely of carbon, which is the key and most abundant component of all organic matter. This allows for the biocompatible use of graphite microparticles to control organic or biological reactions without the addition of contaminants such as typical magnetic materials.

“The challenge was similar to moving tennis balls through honey without being able to touch them directly. Our work opens the door to a range of new possibilities for exploiting the fascinating properties of micro-graphite for remote non-invasive manipulation applications in bio-sensing, drug delivery, biophysics and soft-electronic experiments,” she added.

This means that diamagnetic particles can be easily controlled at a distance from the magnet and could be confined and moved in three dimensions by applying easy-to-use time-constant magnetic fields. In contrast, ferromagnetic particles are typically attracted towards the magnet and can only be manipulated in 3D using involved schemes with time-varying magnetic fields.

First author Dr Johnny Nguyen (UCL Physics & Astronomy), who conducted the magnetic transport experiments with the specially prepared graphite particles, said: “Graphite is a really interesting material. It is the most strongly diamagnetic material known and it has properties such as high polarizability and conductivity, broad optical absorption, and optically controllable electrical resistance which allows applications across materials science, physics and chemistry.”

The team used ultrasound to break up graphite into microparticles, each consisting of a stack of graphite sheets, which were then coated in lipid layers to prevent clumping in water.

Key to the success of this technique in biocompatible water solutions was the delicate preparation of the sample. We also had to account for complex interactions between the microparticles and the glass surfaces of the sample container,” added Dr Nguyen.

Co-author and PhD candidate Dario V. Conca (UCL Physics & Astronomy), who helped characterise the particles said: “We had to combine expertise in sample preparation with material characterisation via Raman spectroscopy and SQUID measurements to fully understand the properties of the microparticles we produced, in order to carefully craft configurations of strong magnets to make this work. It really required a diverse team to pull together their knowledge to achieve this outcome.”

Dr Llorente-Garcia’s group are planning to build on this work to demonstrate full 3D trapping of the particles and develop applications for its use.

The research was funded by HEFCE, EPSRC and The Leverhulme Trust.