Loleta is interim Head of Career Pathways in Organisational Development, where she's working on a new website for Career Pathways, as well as the UCL Ways of Working behavioural framework. Here, she shares her latest projects and favourite spot in London for meeting friends. 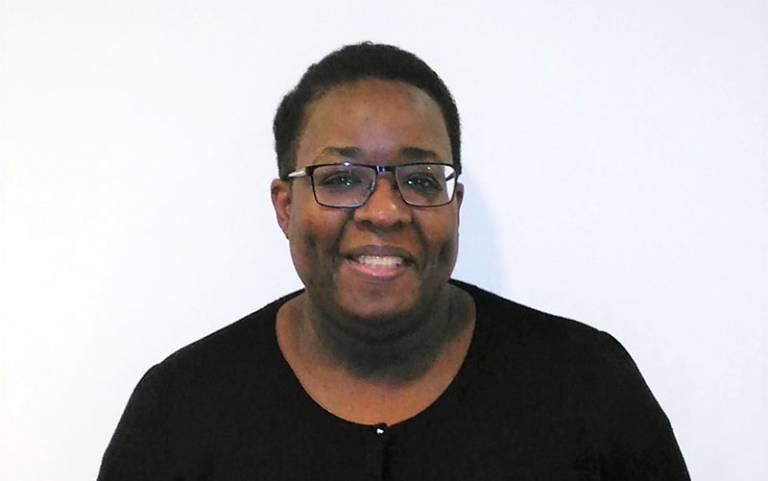 I am the interim Head of Career Pathways based in Organisational Development. I am currently on secondment from my permanent role, Head of Research Operations at the Institute of Education (IOE), and I have been in my interim role since mid-September 2019. The role involves working with a wide range of Professional Services staff across UCL to map out Career Frameworks, which provide staff with clear and accessible information that will allow them to identify routes to development, while planning their personal and career development.

Through a succession of promotion opportunities I found myself working in research management some 12 years later. Before joining the Institute of Education I worked at an FE college for eight years, providing training and career development advice to potential students of all ages. Prior to this, I worked for the British Council supporting overseas students who were in receipt of Fellowship awards funding their study in the UK, and later on, I moved to a department where I was responsible for arranging visitor’s programmes for international academics and industry professionals.

Following the merger of UCL-IOE, all of the IOE Professional Service areas went through a major restructure. I was appointed as the IOE Research Operations Manager in January 2017 and my main objective was to lead the newly formed team through the restructure while ensuring that research funding applications, and awarded funding, continued to receive ongoing support. As a team we faced a lot of challenges; gaps in staffing (brought about by difficulties in recruitment) were especially difficult to manage, and put an immense amount of pressure on all of the team.

That’s not to say that everything has been resolved, there’s a full complement of staff, and everything in the world of IOE research support is perfect but despite the difficulties, the team consistently found reserves from somewhere in order to make sure that we continued to provide support to the academic community. The steady increase in the number of research bids submitted each month, and the growing number of successful funding applications was quite an achievement.

There are two projects that I’m currently working on and they’re both very closely linked, so I have to mention both of them! The first is the development of a new interactive website for Career Pathways, which will be launched early in the New Year. Visitors to the website will be able to search for information on job roles in different service areas using a range of criteria to filter their search results.

In addition to the Communication and Marketing (CAMPlus) Career Framework, the new website will also include three more frameworks which have been developed this year; Education Administration and Student Support, HR, and Project and Programme Management. I am currently working with colleagues to produce frameworks for IT, Data and Insight, and Operations Management, and in addition, at least eight additional service areas have been identified where Career Frameworks will be developed over the next 18 months.

The second project that I’m working on is the UCL Ways of Working behavioural framework. This framework was launched in May 2019 and a group of us (colleagues from OD/HR and across UCL) are now reviewing the initial implementation phase to understand if (and how well) the framework has been adopted by staff, and how it is currently being used. We also want to identify ways in which we can help managers/team leaders support their staff by using the framework to inform better conversations during inductions, appraisals, team events, etc.

What is your favourite album, film or novel?

My favourite film would have to be The Shawshank Redemption. Admittedly it is a bit brutal, but I originally read the short story which the film is based on, and I really like the way that the story has been developed into a film. It’s funny, sad, tragic and brutal, but the acting is amazing and it does have a happy ending.

Celebrities do not really impress me so I would have a capable chef in the kitchen, cooking something nice and comforting, while I relax with a group of my closest friends enjoying a really nice meal and an evening filled with lots of laughter and the odd glass of wine.

In times of stress – take a deep breath and count to ten!

Mathematics was my least favourite subject at school, and I couldn’t imagine taking a job that involved finance in any way shape or form. And yet I ended up working in research administration/management for 12 years and I really enjoy working with numbers and Excel spreadsheets…

I like getting out of London on short breaks, but then I also appreciate the convenience of living in London, even though it does get very busy. One of the things I really like to do is walk along the South Bank, simply because I can keep walking until I feel like retracing my steps, and it’s literally a short distance from my home. The South Bank is my go-to area for meeting friends when we’re short on ideas of where to go; we can meet for a chat and a wander, and maybe stop off at a one of the many watering holes along the way.