Using geographic profiling to map half a century of ring-necked parakeet sightings, a research team involving UCL has found no evidence to support any of the colourful legends surrounding the birds’ origins in the UK. 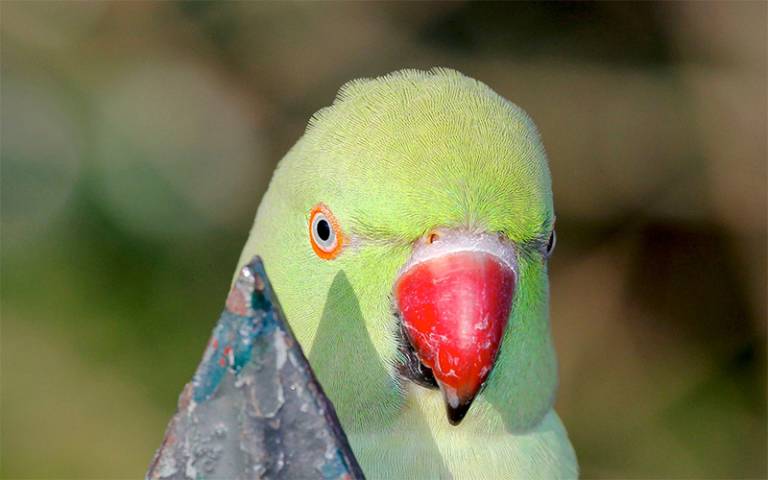 Stories have circulated in recent years that seek to explain how the non-native bright green birds (Psittacula krameri) started breeding and spread to become one of Britain’s most successful alien species.

Despite sightings dating back to the 1860s, many insist that Jimi Hendrix first released a pair on Carnaby Street. Others claim a flock was let go from the set of the Bogart and Hepburn classic The African Queen when filming wrapped in 1951.

One theory suggests that parakeets kept at Syon Park escaped in the 1970s when a plane crashed through the aviary roof, while another blames damage to aviaries during the Great Storm of 1987.

A new spatial analysis, published in the Journal of Zoology, backed by an extensive search of archived newspaper articles, concludes that Britain’s booming parakeet population has instead grown from numerous small-scale accidental and intentional pet releases.

Co-author Professor Tim Blackburn (UCL Genetics, Evolution & Environment) said: "As a keen birder, the various stories about the origins of parakeets always seemed unlikely. I’ve seen individuals of at least four other parrot species in the UK, which shows that releases or escapes of pets is not uncommon. This was probably the source of our parakeets too.

“The parakeets are now spreading widely, and negative impacts of these birds are increasingly being reported. This would hopefully act as a warning that letting pets go can potentially have significant consequences, even if they don’t become apparent for decades after the releases happened," he said.

None of the ‘suspect sites’ connected to origin myths (Worton Hall Studios, Syon Park, and Carnaby Street) showed up prominently in the geoprofile of more than 5,000 unique records dating from 1968 - 2018.

Geographic profiling typically maps crime sites, such as the location of murder victims’ bodies. This is overlaid on a map of the area of interest to produce a geoprofile and narrow down the area where the perpetrator is likely to live or work.

When applied to biological data, the model can identify the origin sites of diseases or introduction sites of invasive species, for example. Lead author Dr Steven Le Comber (Queen Mary University of London) has used the technique in a variety of ways inside and outside the natural world, mapping malaria outbreaks, Banksy paintings, WWII bombs, and more.

A British Newspaper Archive search conducted at Goldsmiths found thousands of pages of news stories about parakeets written between 1804 and 2008. But search word combinations failed to locate a single item of news coverage documenting the escape or release of parakeets in the context of the four main origin myths.

Numerous sensational accounts of human deaths due to psittacosis infections were printed from 1929. In 1932 the Middlesex County Times reported that parakeets had been spotted in Epping Forest and the newspaper credited the ‘parrot disease scare’ of 1931 for an increase in pet birds released into the wild.

Study co-author Sarah Elizabeth Cox, postgraduate history student at Goldsmiths, said: “Scary health stories often prompt a strong public reaction – look at the late-1990s autism/MMR panic. It is easy to imagine the headlines of 1952, such as ‘Stop imports of danger parrots’ leading to a swift release of pets. If you were told you were at risk being near one, it would be much easier to let it out the window than to destroy it.”

Yet by 1961 birds were a more popular pet than cats and dogs in Britain. With 11 million (various species) in captivity, it seems likely there would be an increase in escapes. A 1976 article, also in the Middlesex County Times, argued that ‘a succession of about a dozen mild winters’ also helped parakeets to breed in the wild.

Dr Le Comber said: “The ring-necked parakeet has become a successful invasive species in 34 countries on five continents. The fun legends relating to the origins of the UK’s parakeets are probably not going to go away any time soon. However, our research only found evidence to support the belief of most ornithologists: the spread of parakeets in the UK is likely a consequence of repeated releases and introductions, and nothing to do with publicity stunts by musicians or movie stars.”