Giving larger volumes of blood transfusions to children with severe anaemia in sub-Saharan Africa could halve the number of deaths, according to new research from a clinical trial co-led by UCL and Imperial College London. 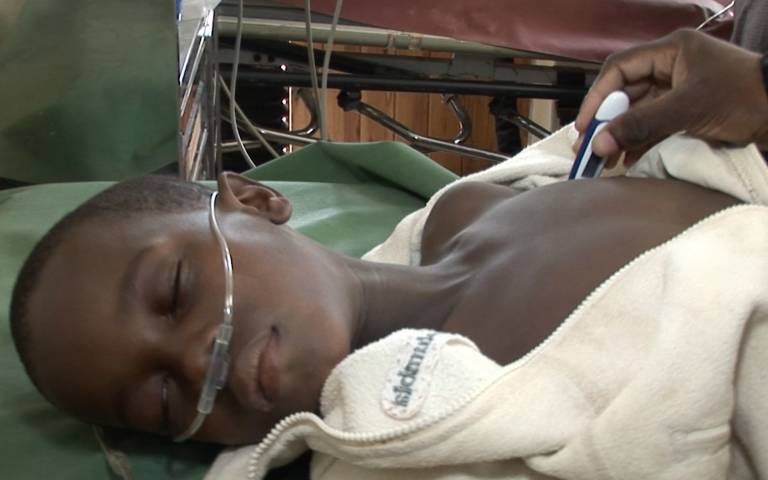 Results from the TRACT trial, published in the New England Medical Journal and funded by the Medical Research Council (MRC), show that children with complicated severe anaemia who do not have a fever require larger volumes of blood transfusions than current World Health Organisation (WHO) guidelines.

However, for children admitted to hospital with a high temperature (fever), the amount recommended by guidelines is correct. Children who received the appropriate amount of blood, depending on whether they had fever or not, were at about half the risk of dying compared to those who received the other amount.

The TRACT trial also showed that children with uncomplicated severe anaemia do not require an immediate transfusion, as long as they are closely monitored for signs of complications, or their haemoglobin levels dropping, and receive a transfusion at that point.

Professor Sarah Walker (MRC Clinical Trials Unit at UCL) said: “Blood transfusions are an important treatment for severe anaemia. However, there is little scientific evidence to guide doctors on how much blood to give children, or which children require it. This means international guidelines are based on expert opinion.

“In sub-Saharan Africa there is often not enough blood donated to meet demand for it. Because of this, and the potential risk of side effects from blood transfusions (reactions or infections), the WHO recommend conservative transfusion strategies. But some doctors are concerned that these guidelines do not recommend enough blood.”

Children who current guidelines say should receive a blood transfusion were randomly allocated to two groups:

Overall, TRACT found no difference between children who had larger volume transfusions versus standard transfusions. However, there was strong evidence that the effect of transfusion volume varied by whether the child had a fever at the time of screening (study enrolment), which was at hospital admission in most cases.

This suggests guidelines need to be updated to recommend different amounts of blood depending on whether a child has a fever. The trial also showed that very few children developed a transfusion reaction or a side effect such as heart failure or lung oedema, indicating that too much volume had been given.

Chief Investigator Professor Kath Maitland of Imperial College London said: “Children in TRACT could receive blood in the form of whole blood or concentrated blood (packed cells), which takes time and money to prepare. In TRACT there was no difference in how children did with these two forms of blood. This could save time and resources for blood transfusions services if making packed cells is not necessary.

"These results will help doctors and guideline developers make sure children with severe anaemia receive safe and effective treatment.”

A child in Malawi with severe anaemia has their temperature measured.