Professor Helen Chatterjee MBE and Dr Daisy Fancourt have both won awards at the Health Humanities Medal, which celebrates good health and wellbeing through arts and humanities research. 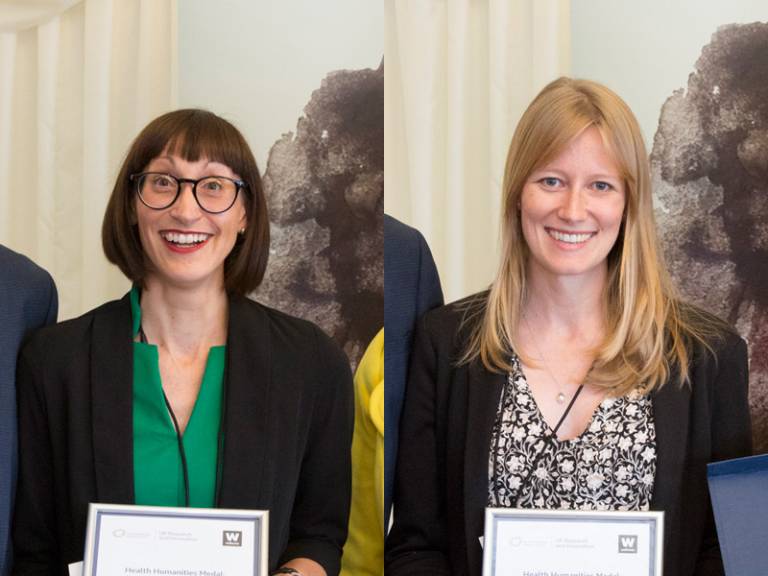 The medal which is handed out by The Arts & Humanities Research Council (AHRC), in association with the Wellcome Trust, honours people and projects which are helping to inform and transform the quality of life, health and wellbeing of the population using arts and humanities research.

Professor Helen Chatterjee received the 'Leadership Award', one of five categories represented at the awards. From the five shortlisted award holders, she also won the overall Health Humanities Medal in recognition of her research into how museums can be beneficial to health.

Professor Chatterjee is a Professor of Biology and Head of Research and Teaching in UCL Culture. She recently led a three-year collaboration project between UCL, Canterbury Christ Church University and seven museums from central London and Kent, looking at how museums can help those who are lonely and at risk of isolation.

Through her work she has formed partnerships with museums, along with health and social care organisations, to better understand the value of museums as community assets capable of supporting public health.

On receiving her award, Professor Chatterjee (UCL Genetics, Evolution & Environment) said: "It is such an honour to be awarded the AHRC-Wellcome Health Humanities Leadership Award and the 2018 Medal. I have the great privilege of working alongside enormously talented and inspiring academics, cultural, health and third sector partners - these awards are their achievements as much as mine."

Dr Daisy Fancourt's research project has won 'Best Doctoral or Early Career Research' at the Health Humanities Medal awards. Her ground-breaking work looked at the combined psychological and biological effects of music with different patient groups. She used the results of over 60 studies to develop a better understanding, allowing her to create a new model of music and biological response.

Dr Fancourt has since used the new model to carry out further research which has included a study showing how singing can boost immune activity for people affected by cancer, as well as a study how drumming reduces anxiety, depression and inflammation in mental health patients.

Dr Fancourt (UCL Epidemiology & Health) said: "I am honoured to have received the inaugural Best Early Career Research Award. No research is a solo effort so I'm particularly grateful to my colleagues in the Department of Behavioural Science and Health at UCL and my collaborators in other universities over the past few years."

Professor Edward Harcourt, Director of Research, Strategy and Innovation at the AHRC said: "We were struck by the exceptional quality of the applications, which express a more inclusive vision of health and wellbeing and how to achieve it in ways that are not driven by medical science alone."

There were almost 100 entries across the five categories and these were assessed by a panel of academics, health practitioners and industry professionals. The winners were announced on 11 September 2018 during an awards ceremony at the House of Commons.