Heavy metal music is inclusive and governed by rules of etiquette

Forget wild and chaotic behaviour, heavy metal music culture is inclusive and governed by etiquette and codes of conduct, according to new UCL research. 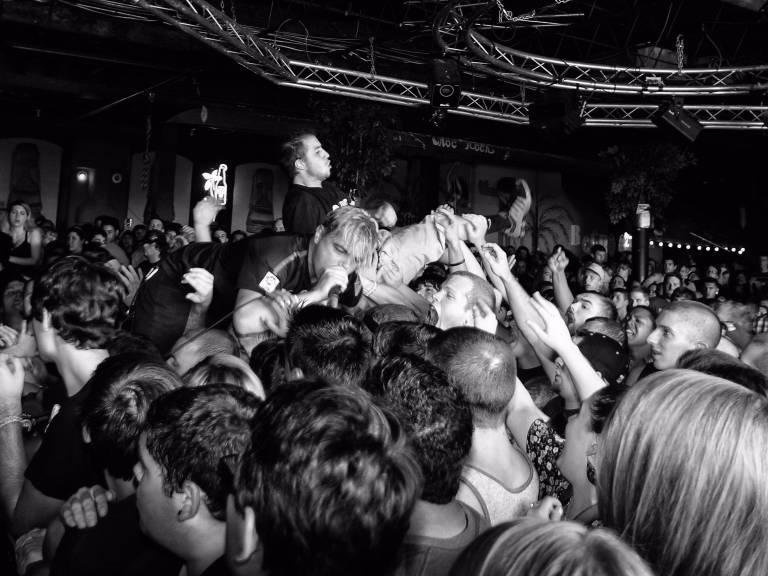 After several years on the road, touring with a variety of metal bands from UK, USA and Europe, UCL Anthropology PhD student Lindsay Bishop has found that the global heavy metal community is complex and transgenerational with elders passing on rules of etiquette, such as most pit behaviour, to younger members.

Bishop, whose study is the first ethnography of its kind to focus on the significance of live heavy metal performance from the perspectives of both the audience and the musician, examines heavy metal from a strictly anthropological perspective.  She has carried out extensive interviews and documented bands including Fear Factory, 3Teeth, Mortiis, Pig and Combichrist. Footage captured while touring with industrial artist Jayce Lewis, has just been released in his new video single with Universal Music.

The study finds that far from the popular perception of 'angry teenage males', heavy metal is culturally inclusive, with a rich and varied audience - including many women and older adults - that embraces an array or religions, sexual orientations and political leanings.

Bishop's research will culminate in an open-source documentary, which will be made available via her website, and a book exploring the capacity of musical performance to create metal communities that have sustained through several generations and have now spread across the globe. Her headline findings include:

The research finds that older generations of metal fans pass on mosh pit etiquette and behaviour to newcomers and younger generations to ensure an environment of 'controlled chaos'. This includes an implicit understanding that the mosh pit is voluntary, that those who fall over should be picked up immediately and if someone is hurt they are taken to the bar by the person responsible.

"When somebody goes down, you get them straight back up 'you alright mate? All your earrings intact?' But it's like that in metal, its being in a huge club and you don't necessarily know everyone's name but you give each other a nod." - Anonymous A

There is a kind of… not a chain as such but guidance if you like, a kind of etiquette of things, it is kind of unwritten." - Anonymous B

Bishop said: "Mosh pits, crowd surfing, circle pits - in an abstract sense epitomise the metal community. The older generations teach mosh pit etiquette and newcomers learn that moshing is not a fight, it's a way to release tension and often create lasting bonds with people.

"Metal culture doesn't have a history of aggression towards mainstream culture that, for example, punk has become synonymous for. In metal culture, aggression is released through catharsis within the crowd."

Despite the perception of the heavy metal community 'as a brutish rite of passage for teenage boys' Bishop says that, it is a "complex, inclusive and global community that now encompasses several generations.

The metal community has evolved since its inception in the 1960s, and today women make up on average one-third of gig-goers and many older adults, families, disabled, LGBTQ people participate throughout the globe.

Bishop explains, however, that there is still work to be done to change perceptions: "While there's been a steady increase in women among the metal community, there is still a perception issue that might give young girls and women the impression it's not for them.  When in fact women all over world are part of the metal community, notably in the South African country of Botswana, there is a community of 'Botswana Queens' that are smashing gender stereotypes through metal music."

Traditionally, studies have focused on either the musicians performing on stage or the audience, but rarely has the collective experience between the two been addressed, particularly from a transgenerational perspective.

The metal community is far reaching and today, in the wake of the digital revolution, bands have evolved their approach to producing music. More emphasis is placed on touring and connecting with the audience than ever before. Thanks to social media, gig-goers and performers are now forging long-lasting friendships.

The relationship between audience and performer is integral in the metal community, and there are a number of rituals that demonstrate this two way dialogue such as, physical connection with the audience, singers conducting the audiences singing, throwing drumsticks and other paraphernalia from stage, and the audience throwing t-shirts or gifts to the performers.

The relationship is also somewhat a consequence of the music industry and dwindling record sales, which has seen bands rely increasingly more on income through touring.

Bishop comments: "Touring is crucial if a metal band is to survive, and this relies on ticket and merchandise sales. Additionally, crowd funding is bigger than ever among the community, and in many ways this is positive as it cuts out the middle man and gives people a more direct connection to the musicians.

"Any band that can withstand the test of time, gains a lot of respect. It would be virtually impossible to see a manufactured band in metal, because in this community, to be successful, you have to put in the time, graft and earn the respect of your audience."

The closest genre to classical?

In metal, the genre is united by many, many subgenres including black metal, power metal, nu-metal, speed metal, doom metal and now even Viking metal. The huge number of subgenres and the complex compositional structure of the music, have led to suggestions that classical and metal are closely related, however there is no direct evidence.

Bishop comments: "What we do know is that there are certainly correlations with classical. Many heavy metal bands are influenced by classical music and a number of metal musicians I have spoken to have studied classical music. There is a similar appreciation among the audience. In Russia, for example, it is common for older metal gig-goers to take sheet music to concerts as they would the Opera."

Bishop's is working on a diagram for the final study that will depict nuances of different metal genres, ranging from the rhythmic complexity of groove-metal to the thick and heavy tempo of doom music and the speed and dissonance of thrash metal to the wild virtuosity of power metal.

Bishop concludes, reflectively: "I went to one metal gig where a 'doom' band played a single song that lasted for a solid 50 minutes. It was like funeral music. The venue was jam-packed and the audience was dead still. It was just a wall of vibration."

One participant described it as: "a great stress reliever […] particularly because […] you can stand there and almost feel your internal organs vibrating."