The ears of male mosquitoes amplify the sound of an approaching female using a self-generated phantom tone that mimics the female's wingbeats, which increases the ear's acoustic input by a factor of up to 45,000, finds a new UCL-led study. 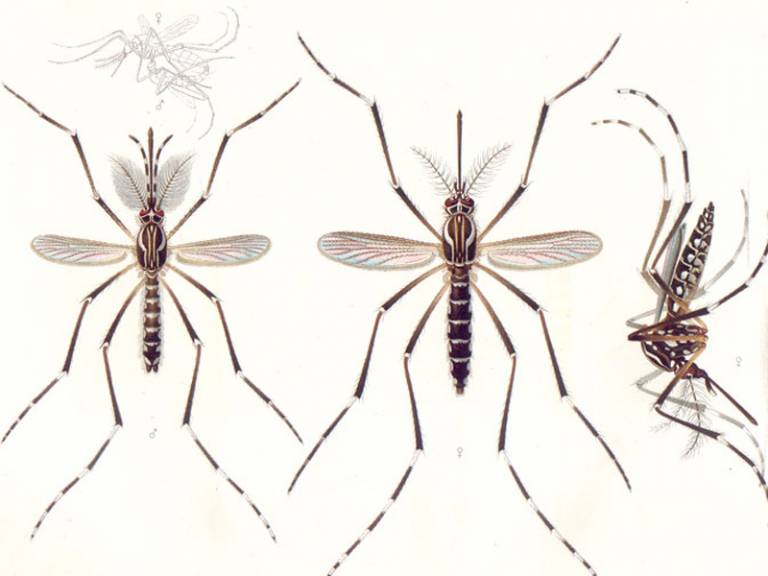 The researchers were studying disease-carrying mosquitoes, and hope their findings, published in Nature Communications, could help design acoustic lures to control the spread of deadly diseases.

"Hearing is a crucial sense for mosquitoes as acoustic communication plays a key role in their mating behaviour. Understanding how mosquitoes communicate in swarms to find mates is important in the development of vector control strategies," said the study's lead, Professor Joerg Albert (UCL Ear Institute).

All three mosquito types mate in swarms, which are typically mostly formed of males with only one or a few females entering at a time, so the males need to pick out the sound of an approaching female from the noise of surrounding males.

The researchers were investigating why the flagella (lash-like protrusions) of the male antennae (mosquitoes hear with their antennae) can vibrate spontaneously at roughly the same frequency of the female wingbeat.

They found that male mosquitoes further amplify the sound of female wingbeats by also taking advantage of the much louder sound of their own wingbeats.

The mixing of the two sounds, of the female wingbeat and the male's own wingbeat, generates an additional distortion tone, or 'auditory illusion' that's only present in the antennae (or in the ears of mammals). The flagella's spontaneous vibrations change to be the exact same frequency as the female wingbeat, to maximally amplify the illusion.

"Essentially, what the male mosquito hears isn't actually the female wingbeat itself; rather, it hears this phantom tone that it has created to amplify the sound," said the study's first author Dr Matthew Su (UCL Ear Institute).

The researchers found that males can constantly produce the spontaneous vibration.

"When we cut off nerve signalling between the mosquito's brain and its antennae, the vibrations were constantly active, suggesting that signals from the brain suppress the vibrations until a female approaches," said co-author Dr Marta Andrés (UCL Ear Institute).

The research team also found that mosquitoes with the biggest swarms exhibited the greatest amplification, suggesting differences in how they evolved.

"We knew that male mosquitoes were adept at listening for females, but were surprised at the extent to which they are able to amplify the sound, with amplification factors greater than anything seen before in any animal," said Professor Albert.

The researcher are continuing their studies of mosquito hearing in order to develop acoustic lures, partly by further elucidating the differences between female and male hearing, as only females bite and infect humans.