A trial for a new gene therapy, known as AXO-Lenti-PD, aimed at improving the supply of dopamine in the brains of people with Parkinson's disease has been launched by researchers at UCL and University College London Hospitals (UCLH). 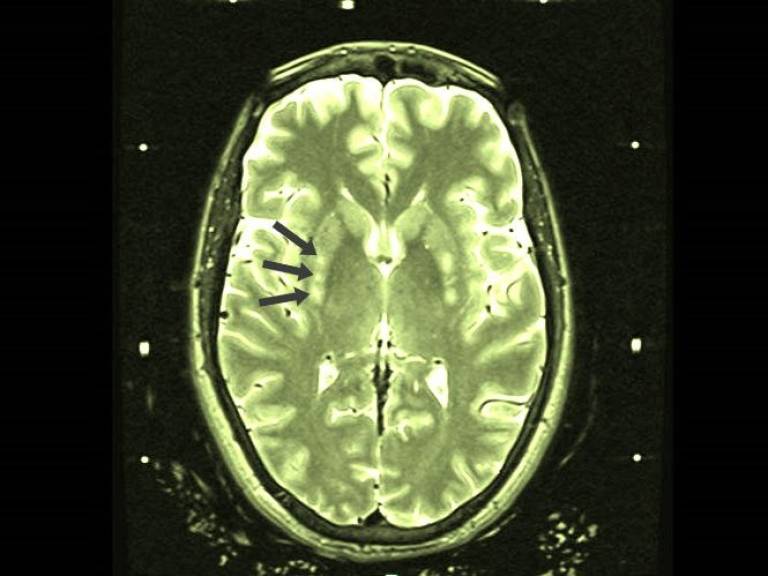 In people affected by Parkinson's disease (PD), parts of the brain become progressively damaged over many years resulting in motor symptoms including tremor, rigidity and bradykinesia (slowness of movement).

This deterioration is caused by a loss of dopamine-producing neurons (nerve cells) in an area of the brain called the substantia nigra. In turn, this leads to a reduction in the availability of dopamine, which acts as a neurotransmitter (a chemical released by neurons) to send signals to other neurons, and has a role in controlling movement and balance.

Gene therapy works by introducing genes via an inactivated viral vector (virus) to specific cells providing them with the genetic instructions needed to change their fate.

AXO-Lenti-PD, also known as OXB-102, is a next generation gene therapy and is being tested for the first time by UCL and UCLH researchers at the National Institute for Health Research (NIHR) UCLH Clinical Research Facility, Leonard Wolfson Experimental Neurology Centre, Queen Square.

The therapy has been developed by Oxford BioMedica and Axovant Sciences Ltd for the treatment of PD, and contains three genes that are responsible for producing dopamine, delivered in a lentiviral vector.

Axo-Lenti-PD will be administered into the part of the brain, called the striatum, which is where dopamine is normally released by cells projecting from the substantia nigra. It is a well-defined structure and easily surgically accessible making gene targeting of cells in the striatum a feasible approach with minimal disruption of other brain regions.

The therapeutic rationale for AXO-Lenti-PD treatment of PD is to provide dopamine replacement to the dopamine-depleted striatum of PD patients by gene transfer of the three critical enzymes in the dopamine biosynthesis pathway.

UCL lead researcher, Professor Thomas Foltynie (UCL Queen Square Institute of Neurology), said: "Genes that increase the production of dopamine could help alleviate the symptoms of Parkinson's disease, potentially with fewer side effects than traditional drug treatments, by targeting only the areas of the brain that are lacking in dopamine.

"It is envisaged that AXO-Lenti-PD will contribute to a continual supply of dopamine within the striatum and sustain stimulation of post-synaptic dopamine receptors in the absence of disabling side effects that currently complicate dopamine replacement therapy given by oral medication."

How the trial will work

The trial will assess up to 30 patients with PD from UCLH, the National Hospital for Neurology and Neurosurgery (NHNN), London, Cambridge University Hospital and the Henri Mondor Hospital, Paris.

Patients will have regular assessments after surgery.

The trial's Chief Investigator is Prof Stéphane Palfi from the Henri Mondor Hospital in Paris.

Professor Foltynie added: "The study will investigate the potential benefit of this treatment to patients with Parkinson's disease by looking at its impact on symptoms, such as tremor, rigidity, and bradykinesia, and seeing if they improve.

"While we do not yet know if it is effective, it is hoped this therapy will provide patient benefit for many, many years following a single treatment."

The first patient on the trial was administered the gene therapy by UCL and UCLH researchers earlier this month, at the National Hospital for Neurology & Neurosurgery, using the NIHR UCLH Clinical Research Facility, Leonard Wolfson Experimental Neurology Centre, Queen Square.

Approval for the multi-centre trial has been sanctioned by the NHS Health Research Authority and follows an earlier study of a first-generation gene therapy called ProSavin®, developed by Oxford BioMedica.

The first patient to be recruited to the trial is a woman in her 50s, who was diagnosed with levodopa-responsive PD more than 10 years ago. She underwent successful surgical treatment to deliver the gene therapy on Wednesday October 17, 2018.