Humans delayed the onset of the Sahara desert by 500 years

Humans did not accelerate the decline of the 'Green Sahara' and may have managed to hold back the onset of the Sahara desert by around 500 years, according to new research led by UCL. 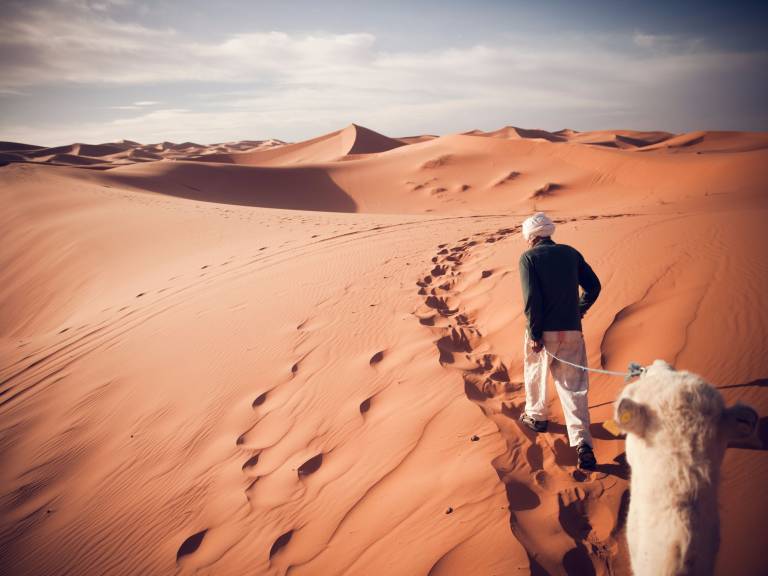 The study by a team of geographers and archaeologists from UCL and King's College London, published in Nature Communications, suggests that early pastoralists in North Africa combined detailed knowledge of the environment with newly domesticated species to deal with the long-term drying trend.

Dr Chris Brierley (UCL Geography), lead author, said: "The possibility that humans could have had a stabilising influence on the environment has significant implications. We contest the common narrative that past human-environment interactions must always be one of over-exploitation and degradation.

"The fact that societies practising 'pastoralism' persisted in this region for so long and invested both economically and ideologically in the local landscape, does not support the scenario of over-exploitation. Our study shows that increasing human population and sustainable pastoralism did not accelerate - and may even have delayed - the decline of the 'Green Sahara'."

Around 8,000 years ago, the Sahara wasn't desert, but instead was a vibrant ecosystem that supported hunter-gatherers and fisherfolk. The 'Green Sahara' -   the colloquial term for the African Humid Period - was the period in which North Africa became much wetter than it is today thanks to a series of monsoons.

As the Earth's orbit slowly changed, the rain started to reduce, and the vegetation started to die back. Around 5,500 years ago, the ecosystem in the Sahara went into a terminal decline towards the desert we have today.

Pastoralism (nomadic or semi-nomadic cattle-herders) blossomed in the Sahara from around 1000 years before that collapse. Previous studies have put the blame for the collapse of the 'Green Sahara' onto these nomads who have often been marginalised in history, but this latest studies dispels that myth.

The study uses a novel climate-vegetation model to determine whether the end of the African Humid Period occurred earlier than expected. The model keeps track of variables such as vegetation and rainfall, and other processes such as the amount of energy coming from the sun, and the amount of carbon dioxide in the atmosphere.

The model found that the 'Green Sahara' should have collapsed earlier than it did. This suggests that pastoralists lasted longer than expected and the techniques they used helped them to adapt to the environmental changes.

Dr Brierley added: "Those places where pastoralists last longer are where there are more resources. It's a good adaptation to the climate change taking place at the time. There is now work today looking at what we can learn from nomadic pastoralists, such as selective grazing strategies, which can be applied to sustainable adaption to desertification that we expect from future climate change."

Dr Katie Manning (King's College London), concluded:  "Despite the largely inhospitable conditions of the Sahara today, it is not hard to find evidence of human occupation from the last 11,000 years. Thousands of rock art sites illustrate a lush environment, large-game hunting and livestock herding. The spread of domestic animals across the Sahara occurred at a time of increasing climatic instability, and yet, these pastoralist populations thrived.

"It is likely that strategies used by contemporary traditional herders, such as seasonal movement and selective grazing, were also used by these early pastoralists, helping to maintain an otherwise deteriorating ecosystem."