Hundreds of children are benefiting from an immersive First World War education programme developed by UCL as part of the Shrouds of Somme project. 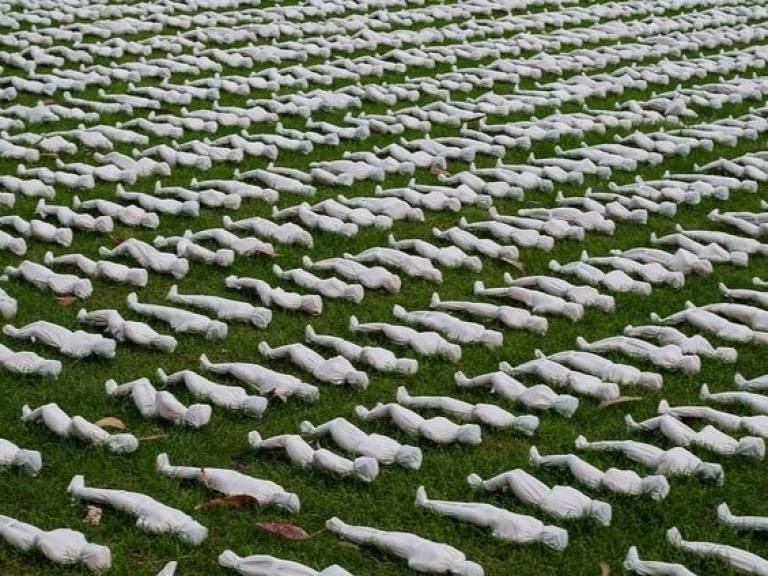 The Shrouds of Somme project stems from artist Rob Heard who has spent the past five years hand-making more than 72,000 small shrouded figures, each one representing one of the men killed in the bloodiest battle in British military history whose bodies were never recovered. It is one of the major centrepieces of commemorations taking place at the Queen Elizabeth Olympic Park in November.

To mark this important period in history, UCL Special Collections has delivered 18 educational workshops since September to schools in the neighbouring Olympic Park boroughs (Tower Hamlets, Hackney, Waltham Forest and Newham). A further 23 workshops are planned to take place, including some run by the Commonwealth War Graves Commission at the new Bobby Moore Academy located within the park.

These workshops, developed in partnership with the UCL Institute of Education's First World War Centenary Battlefield Tours Programme, combine historical enquiry with poetry, creative writing and the use of primary resources from UCL Special Collections to investigate the Battle of the Somme; what it was and how and why we remember it.

The resources include self-guided teaching material for visiting groups and a free-online teaching resource, to complement its workshops and introductory sessions for Primary and Secondary school classes.

On Thursday 8 November, each of the shrouds will be laid out at the Queen Elizabeth Olympic Park as a graphic reminder of the scale of sacrifice made in the Great War. Many of the schools that participated in the educational workshops will be present on the day, in what is expected to be an unforgettable way of marking the historic landmark of 100 years since the end of the First World War.

Vicky Price, Education Co-ordinator (UCL Special Collections), said: "You can teach the details but one thing that's almost impossible to do is help children to understand the scale of the sacrifices made during the First World War. Visiting the site of the Shrouds helps bring this message home.

"The Shrouds of the Somme presents schools with an invaluable opportunity to engage with the history of the First World War around this year's important Armistice Day; it is a unique representation of one artist's efforts to memorialise the many thousands of soldiers lost in action at one particularly devastating battle.

"The First World War is an immense topic to teach to young people, and providing the right stimulus and environment to allow pupils to develop their own emotional and intellectual response is a real challenge.  Learning about the artist Rob Heard's journey to creating this installation, using our online resources, visiting the installation and participating in workshops and discussions are all excellent ways for pupils to make a meaningful connection between the Armistice tradition and the magnitude of the First World War."