House of Doors opens up for Houses of Parliament

A contemporary sculpture, created by UCL Artist-in-Residence, Kristina Clackson-Bonnington, has been chosen by the Palace of Westminster to mark the 100th anniversary of the Representation of the People Act 1918. 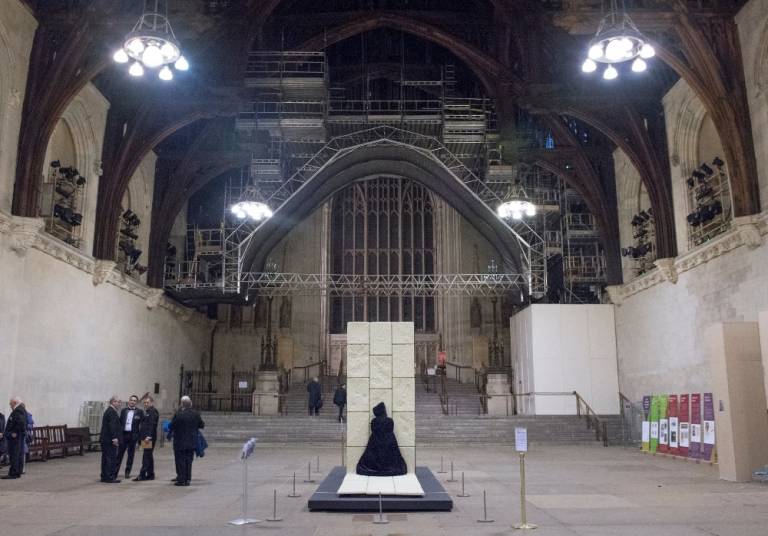 The House of Doors is a public art project, which invites viewers to consider how access to public life has changed since 1918, with particular emphasis on the spaces and roles that were closed to women and that have since opened up.

It will go on display in Westminster Hall from 12 November to 3 December, 2018, as the Houses of Parliament celebrate the centenary of this historic event, which gave some women and working men the right to vote in elections.

The House of Doors is a monolithic structure and references architectural details from significant sites of women's equality and exclusion:

The centrepiece of the project is a resonant sculpture of a cloaked woman facing a vertical stretch of paving in place of a door. The stone 'door' thus represents a physical obstacle, rather than an entrance point and audiences are asked to consider how the 'door' could be opened, over-leaped, or manipulated to become a pathway.

"This all started with a painting I came across in Canterbury - it's a life-size painting of a little girl standing at a door, painted in 1910.

"The painting immediately struck me as being of huge social significance; in 1910 the little girl standing at that threshold was excluded from so many places, but major social change was on the way.

"By creating this large-scale, participatory work and welcoming hundreds of people to the House of Doors - from young children to Parliamentarians - we can face this barrier together and imagine what a more equal society would look like."

The passing of the Representation of the People Act 1918 was the culmination of many years of agitation, hardship and sacrifice by the Women's Suffrage Movement, and signalled the beginning of the long struggle for equality that continues to this day.

"UCL was thought to be the perfect site to launch the House of Doors due to its historical ethos of equality. UCL was the first secular university in the UK, and the first university to admit female students on equal terms to men."

The House of Doors has toured across the UK since its launch on the eve of International Women's Day 2015, in partnership with UCL Art Museum. At the launch UCL's Quad was reworked into the full, immersive version of the project.

Kristina is now working on a related exhibition to mark the centenary of votes for women, entitled Female Firsts. This exhibition celebrates the achievements of 12 notable female alumni of UCL and will be completed in early December, when a special event will take place in its honour, opened by the Provost of UCL. The full exhibition will be on display in the South Cloisters of the University between 14 December and 2 February 2019.