Stars formed only 250 million years after the Big Bang

Stars in a galaxy 13.28 billion light years away formed only 250 million years after the Big Bang, finds a team of international astronomers led by groups at UCL and Osaka Sangyo University in Japan. 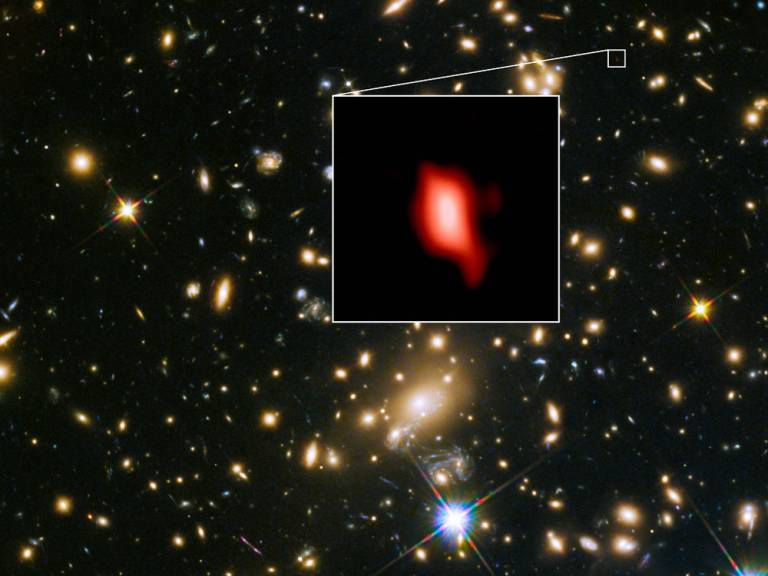 The discovery shows that stars in the galaxy - called MACS1149-JD1 - formed at an unexpectedly early stage in the age of the Universe and the new observations break the team's own record for detecting the most distant known source of oxygen.

The team confirmed the distance of the galaxy through observations undertaken with the Atacama Large Millimetre/Submillimetre Array (ALMA) and the European Southern Observatory's Very Large Telescope (VLT); the distance corresponds to looking back to a time when the Universe was only 500 million years old, which is 3.5% of its present age.

Although the presence of galaxies at this epoch is not necessarily surprising, the detection of oxygen in MACS1149-JD1 indicates a more remarkable conclusion. Oxygen is only created in stars and then released into the gas clouds in galaxies when those stars die.  The presence of oxygen in MACS1149-JD1 therefore indicates that a previous generation of stars had already formed and died at an even earlier time.

"This is an exciting discovery as this galaxy is seen at a time when the Universe was only 500 million years old and yet it already has a population of mature stars. We are therefore able to use this galaxy to probe into an earlier, completely uncharted, period of cosmic history!" explained Dr Nicolas Laporte, second author and a postdoctoral researcher at UCL Physics & Astronomy who led the VLT observing campaign.

The study, published today in Nature, was an international and collaborative effort. The Japanese team, led by Dr Takuya Hashimoto and Professor Akio Inoue of the Osaka Sangyo University, used ALMA to observe the distant galaxy called MACS1149-JD1. They detected a signal from ionised oxygen whose infrared light was stretched ten-fold to microwave wavelengths by the expansion of the Universe.

ALMA has set the record for the most distant known source several times. In 2016, Professor Inoue and his colleagues detected oxygen emission at 13.1 billion light-years. Several months later, Dr Laporte used ALMA to detect oxygen at 13.2 billion light-years away. Both teams merged efforts to achieve this new record.

"ALMA is now clearly the most powerful instrument for securing distances to galaxies in the early Universe ahead of the expected launch of the James Webb Space Telescope," commented Professor Richard Ellis, a co-author also at UCL.

The team reconstructed the earlier history of MACS1149-JD1 using infrared data taken with the NASA/ESA Hubble Space Telescope and NASA Spitzer Space Telescope. The observed brightness of the galaxy is well explained by a model where the onset of star formation corresponds to a time only 250 million years after the Universe began.

The maturity of the stars seen in MACS1149-JD1 raises the question of when the very first galaxies emerged from total darkness, an epoch astronomers call `cosmic dawn'.

By establishing the age of MACS1149-JD1, the team has effectively demonstrated the existence of early galaxies to times earlier than those where we can currently directly detect them.

Professor Ellis said: "Determining when cosmic dawn occurred is akin to the `Holy Grail' of cosmology and galaxy formation. With MACS1149-JD1, we have managed to probe history beyond the limits of when we can actually detect galaxies with current facilities.  There is renewed optimism we are getting closer and closer to witnessing directly the birth of starlight. Since we are all made of processed stellar material, this is really finding our own origins."

[2] The galaxy GN-z11 is thought to be located 13.4 billion light-years away based on observations with the Hubble Space Telescope (HST). But the precision of that distance measurement with is significantly lower than that of MACS1149-JD1 which is based on the use of two independent emission lines from atoms of hydrogen and oxygen.