Congratulations to Professor Eleanor Maguire who became an Honorary Member of the Royal Irish Academy (RIA) on Friday 25th May 2018. 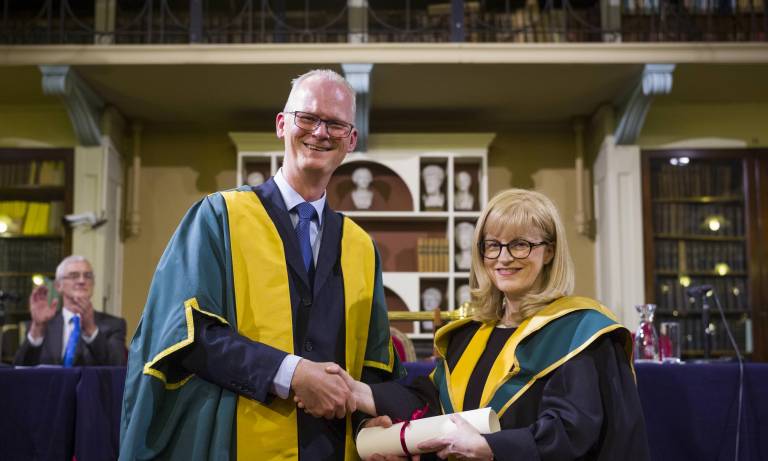 Professor Maguire is Deputy Director of the Wellcome Centre for Human Neuroimaging at UCL Institute of Neurology. Her research focuses on using neuroimaging to study how memories are formed, represented and recollected by the human brain.

The RIA describes Professor Maguire as one of Ireland's pre-eminent scientists, citing her stellar reputation for her work on the brain structures supporting memory, spatial navigation and mental time travel. She has won prizes such as the Ig Nobel Prize for Medicine and the Cognitive Neuroscience Society Young Investigator Award, and is a Fellow of the Academy of Medical Sciences and a Fellow of the Royal Society.

She was one of 28 new Members of the RIA admitted in the Admittance Day ceremony.

RIA President Professor Peter Kennedy, pictured above with Professor Maguire, said: "We should be proud of these new Members of the Academy for the honour their work brings to this country and the impact of this research on the quality of the higher education provided by our universities."

Upon her election, Professor Maguire said: "I feel extremely honoured to have been elected a member of such a prestigious Academy that does so much to champion scientific research and the benefits this has for society."