For the first time in our planet's 4.5 billion-year history a single species, humans, is increasingly dictating its future, according to a new book by UCL scientists. 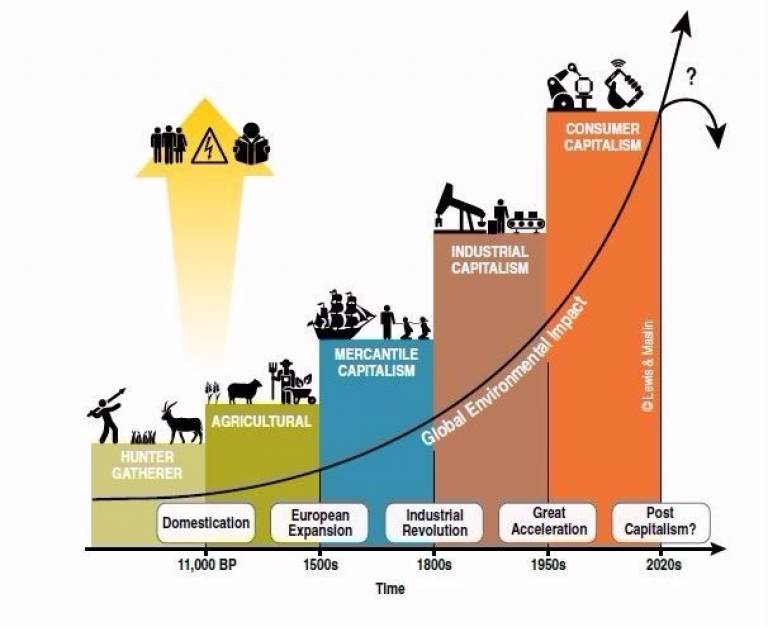 The new epoch known as the Anthropocene - assessed in 2015 by Professors Simon Lewis and Mark Maslin in a report published in Nature - marks the period when human impacts on our home planet have become global and sustained.

In their new book, The Human Planet, the authors have now gathered new evidence which reveals the basic rules governing human societies from the earliest hunter-gatherers to those of the present day.

They warn that this evidence points to today's globally interconnected mega-civilisation moving in one of two directions; one of continued rapid global growth and an eventual catastrophic collapse, or the emergence of a new mode of living that replaces the latest type of society, consumer capitalism.

The two scientists show that in all of human history there have been just five successive types of society that spread worldwide. Each of these societies relied on the greater use of energy, and a greater generation and flow of information and knowledge. This resulted in more people, increased productivity, and rising collective human agency, but also led to ever-greater global environmental consequences.

"How the human story fits within Earth's history is obviously complex, but one role of scientists is to pick away at difficult problems to understand them in simpler and more fundamental ways," said Simon Lewis, Professor of Global Change Science (UCL Geography).

"By tracing the environmental impacts of different human societies since our march out of Africa we noticed that they had features in common. While new energy sources, like fossil fuels, and new ways of communicating information, like record-keeping, are well-recognised as revolutionary in their impacts, a much larger and more coherent picture emerged."

The five societies that emerged and spread are: Hunter-Gatherer, Agricultural, Mercantile Capitalist, Industrial Capitalist and Consumer Capitalist. Each of these started with a major, and usually traumatic, transition: Domestication, European colonisation, the Industrial Revolution and the Great Acceleration that followed the end of the Second World War.

The scientists believe that their analysis points towards to two future scenarios. One following the response of all other types of animal that encounter vast new resources: a long period of exponential growth, just as the global economy is growing, followed by a swift collapse; or the emergence of a new sixth type of society that replaces the consumer capitalist mode of living.

The academics argue that more energy for all and increased investments in education, the internet and computing are essential components for a transition to sixth type of society. However, even if new energy comes from renewables, and fossil fuels are rapidly phased out to avoid catastrophic climate change, such a leap may not be enough to avoid collapse. To do that requires breaking the current high-production and high-consumption model of human development at the heart of consumer capitalism and a focus on environmental repair.

The book ends with two bold ideas that are under increasing discussion to do this: Universal Basic Income, an unconditional payment to every citizen to cover their subsistence needs, to break the production-consumption dynamic; and Half-Earth, where half the Earth's surface is allocated for the primary benefit of other species, with humans having the run of the rest, to enable environmental restoration.

"What human actions have done in the small amount of time we have been on this planet is astonishing. We have cut down half the trees on Earth, over 3 trillion of them, and have made enough concrete to cover the whole surface of the Earth in a layer 2 millimetres thick. We have created over 170,000 synthetic mineral-like substances compared with about 5,000 'natural' occurring minerals, and we make over 300 million tonnes of plastic per year which can be found in every ocean. Most shocking of all is that if we weighed all land mammals in the world, humans would represent 30 percent, livestock 67 percent and just 3 percent wild animals. We really do live on a human dominated planet" says Mark Maslin, Professor of Earth System Science (UCL Geography).

Lewis and Maslin conclude that we need to recognise our planet-changing power and redirect it to shifting to a new type of society so that people and the rest of life we share our home planet with can all flourish.