Professor Cathy Price (UCL Institute of Neurology), has been awarded a scientific 'heirloom' in recognition of her achievements in the field of brain imaging, at the 5th Suffrage Science Awards for Life Sciences. 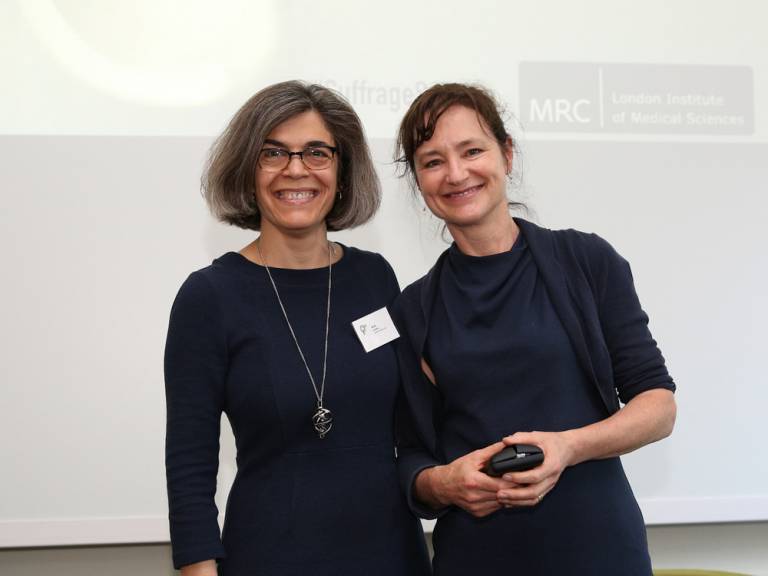 The awards, run by the MRC London Institute of Medical Sciences, celebrate women in life sciences, engineering and physical sciences, mathematics and computing, and aim to encourage others to enter these fields and reach senior leadership roles.

Professor Price was one of 11 leading world scientists who received an 'heirloom' piece of jewellery, at the Suffrage Science awards ceremony, held at the Academy of Medical Sciences, London on Wednesday (June 6 2018).

The 11 awardees were chosen by a previous award holder for both their scientific achievements and ability to inspire others. The awards themselves are items of handcrafted jewellery, inspired by the Suffrage movement, and are passed on as heirlooms from one female scientist to the next.

Professor Price, who is Director of the Wellcome Centre for Human Neuroimaging, was chosen by Professor Kia Nobre (University of Oxford), who won the award in 2016.

Professor Nobre said: "I chose Cathy Price as my nominee because of the multifaceted way in which she is an inspiring scientist.

"Cathy is a pioneer in brain-imaging and in the study of language in the human brain, and she is director of the world-leading Wellcome Centre for Human Neuroimaging.

"She blossomed through the trenches of a very macho world with gentle words, generous deeds, scientific commitment and rigour, genuine translation of research to clinical benefit, and humour."

Professor Price's current research aims to predict and explain language outcome and recovery after stroke and other forms of brain damage.

She said: "I am delighted with this opportunity to encourage more women into science careers. You get paid to learn about life every day and meet interesting and interested people. And the hours are flexible so that you can mesh your work around a rich and rewarding family life. I love it."

The Suffrage Science scheme was initiated by Professor Dame Amanda Fisher, Director of the MRC London Institute of Medical Sciences (MRC LMS) in 2011.

The awards for life sciences are presented every two years, with ceremonies in other years honouring women in engineering and physical sciences, and maths and computing.

Professor Fisher said: "Now in its seventh year, these heirlooms create a self-perpetuating network of talent and contacts to help others succeed in science.

"This year's awardees join a community of over 100 women scientists. Since 2011 the awards have travelled from the UK, across Europe to the USA, Hong Kong and now to Australia, illustrating the international nature of science and the global effort to improve female representation."

The awards are jewellery created by art students from Central St Martins who worked with scientists to design pieces inspired by research and the suffragette movement, from which the award scheme takes its name.