UCL has set out a vision of Brexit and beyond in a book that brings together 28 of the world's leading experts on European studies. 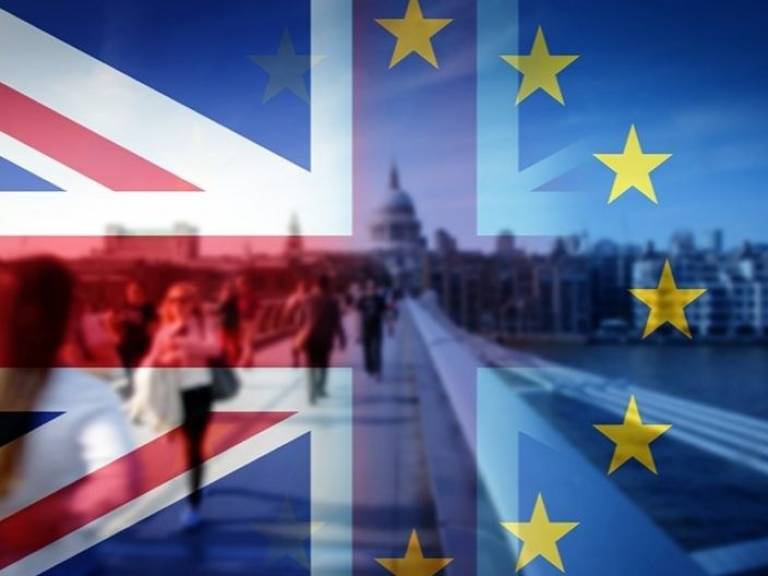 The book, published as a free download by UCL Press, comprises short essays examining the consequences of the monumental decision by the British electorate to leave the EU in the referendum of June 23 2016.

Entitled Brexit and Beyond: Rethinking the Futures of Europe, it has contributions from experts on politics, law, history, international relations and philosophy who provide insights on the potential consequences of the vote for Britain and Europe.

Drawn from top universities around the world, from Oxford, Cambridge, UCL and LSE to New York, Columbia, Louvain, Florence and Maastricht, the book includes critiques of how the vote has exposed Britain's "threadbare" constitution alongside warnings that the Brexit vote could be a catalyst for the disintegration of the EU.

As well as analysis from advisers and academics who have worked inside EU institutions, there are polemical pieces from both sides of the debate, with one warning that the vote will reduce the UK's ability to influence outcomes, while another says monetary union has plunged the continent into a decade of depression.

Edited by Uta Staiger, co-founder and Executive Director of the UCL European Institute, and Benjamin Martill, Dahrendorf Fellow in Europe after Brexit at LSE, the book was launched on January 29th at a panel discussion at UCL's Anatomy Building.

Opening the discussion on his chapter, entitled The Brexit Icebeg, Chris Bickerton, Reader in Modern European Politics at Cambridge University, said that Brexit was representative of a more general dissatisfaction with politics on the European continent.

He argued that popular disenchantment with the EU is rooted in the negative effects of economic and monetary integration on different national growth models, which have worsened the differences between these models whilst simultaneously making reform more difficult.

Britain's economic model, based on low unemployment and depressed wages, meant that immigration became a key factor in the Brexit debate, while in Germany the idea of a great economic success story had given way to austerity and anger against paying to prop up other countries.

"Brexit should not be treated as an exceptional and standalone phenomenon, isolated from the rest of the European continent. Though it is unlikely that other countries will follow suit in the near future, Brexit nevertheless expresses some fundamental tensions present within the project of 'ever closer union'," he said.

Professor Helen Drake, Director of the Institute for Diplomacy and International Governance at Loughborough University, drew parallels between the disruption of Brexit with the "disruptive" politics championed by President Emmanuel Macron in France.

"Brexit is not moving fast but it is breaking things. When you talk about Macron in France, everything is changing," said Professor Drake, who noted that Macron had also put political union in Europe back on the agenda. However, she cautioned: "Disruptive change is very high cost and very high risk. I think both of them are going to be equally tricky."

Simon Hix, Professor of Political Science at the LSE, said the EU reaction to crises was to call for greater integration but he doubted that this would happen. Nor too did he anticipate that the EU would follow the alternative model of a two-tier EU, with a small group forging ahead with a tighter union.

Instead, Professor Hix proposed a rethink of the model of EU integration based on the "remarkable creation" of the single market, a free trade area that was the envy of other countries. "Why don't we do what the US does which is to have a bilateral framework?" he said.

So, Germany would recognise Austrian services, Spain would recognise Portugal's, for example, which, across Europe would create a "patchwork quilt" of services market integration. This would allow much greater flexibility, generate growth and ultimately support the process of European integration.

Kalypso Nicolaïdis, Professor of International Relations at the University of Oxford, argued the EU needed to be more flexible and establish a dialogue between Remainers and Brexiteers. She drew the analogy of a person in a balloon asking those on the ground: where am I? with the reply coming back: You are in a balloon.

"We need to find common languages to speak to these cleavages where Remainers and Brexiteers can speak to each other," said Professor Nicolaidis.

The book also includes an essay from Piet Eeckhout, Professor of Law and Dean of the Faculty of Laws at UCL. In his chapter, entitled The Emperor has no clothes: Brexit and the UK constitution, he argues that the Brexit vote, and in particular the recent Miller case, highlights the threadbare nature of the British constitution.

He argues that the judgement shows Parliament is the 'last man standing', since it can override established rights, curtail devolved powers and withdraw from international treaties, regardless of the domestic consequences.

He concludes that "the only principle that stands is that of parliamentary sovereignty. Any Parliament can always do as it likes, with any statute, at any time…Whether this is the best system for a twenty-first century constitutional democracy which aspires to be 'global' is, however, an open question".

Richard Bellamy, Professor of Political Science at UCL, takes to task the idea that Brexit will help the British people to 'take back control'.

In his contribution, Losing control: Brexit and the democratic disconnect, he argues Brexit will reduce the UK's ability to control outcomes, since we will be disassociating ourselves with those forms of cross-border governance necessary to regulate trans-national problems, such as market pressures and environmental degradation.

Yet, he also argues the EU's own attempts to reduce its so-called 'democratic deficit' are flawed in their aim to replicate national democracy at the European level. Instead, he argues, "the EU should offer space for countries to collectively regulate transnational processes, such that they are able to control the externalities of their democratic decisions".

Brexit and Beyond is available as a download here