This week, meet Maisie Harrison who is studying a combined Arts and Sciences BASc and is currently a UCL ChangeMakers student fellow. 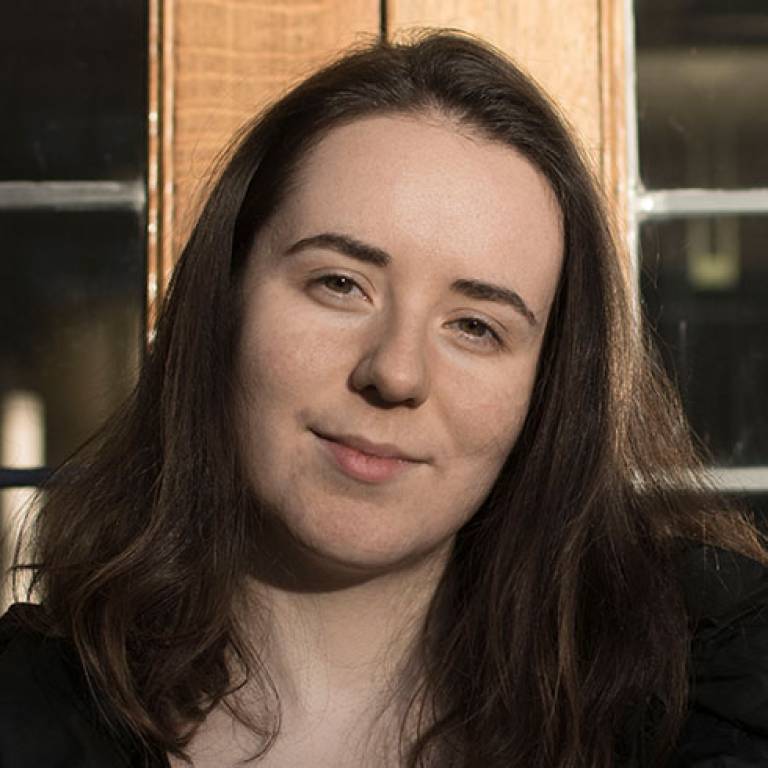 1. What are you studying and what do you plan to do in the future?

I'm currently completing a BASc degree which means I study a variety of subjects from environmental physics and coastal engineering to the politics of international development and public policy or the anthropology of fishers and fisheries. I am hoping to combine this broad interdisciplinary knowledge with skills I developed through the film society and work in the field of communicating science and technology.

Since November, I have been loving working with three other student fellows to promote and support UCL ChangeMakers projects.

I had signed up to the UCL ChangeMakers Moodle page, hoping to run a project of my own. But instead, I saw the opportunity to become a student fellow. This role often feels like a meta-ChangeMaker project, essentially we are looking to better communicate the many amazing ChangeMaker projects that take place at UCL to the people who benefit from them.

It's a constant challenge to understand how the different parts of UCL work together, but it has given me a great insight into what goes on behind closed doors to support innovative ideas for teaching and learning at UCL.

I strongly recommend either doing a UCL ChangeMakers project or becoming a student fellow. I can now see that UCL today has been shaped by many individuals over many years and there really is a space to have your ideas heard and your actions commended (and funded!).

3. Have you discovered any 'hidden gems' during your time at UCL?

At freshers' fair in my first year I met a friendly Sabbatical Officer from the Students Union who persuaded me to run for election as Halls Rep. At first I was sceptical, but being Halls Rep became one of the best parts of my year. I met so many great people from Max Rayne and Ifor Evans and together we threw the artiest Karnival party, organised an Easter egg hunt (with gem-coloured chocolate eggs) for the children of international students on site and founded the Cut The Rent campaign. Max Rayne might not be the prettiest sites of student accommodation, but I have very fond memories.

4. Give us your top three things to do/see/go to in London

1. This might be an odd one, but I recommend that you go to a station and then leave London. I find it easy to be trapped in the hustle and bustle of London life, but there's so many great places to explore in the UK and the Victorian stations you leave from can be architecturally spectacular. From Euston station I've been to Sheffield, Manchester, Edinburgh and from there going out into the Peak District, the Lake District and Loch Lomond and the Trossachs. London is amazingly connected, and now I'm back at UCL, I am trying to keep my year abroad mentality of going to new places and trying new things.

2. The Hampstead Heath ponds are a blissful way to escape the city, this time without leaving the city. Hampstead Heath itself is a magical place and many times at the end of a day of lectures I have grabbed an adventure-loving friend, jumped on the 24 bus and gone for a walk before the sun sets. This is all very lovely, until said adventure-loving friend suggests that we take the plunge and enjoy the natural swimming facilities.

3. All that said, I do quite like London and the buzz I get by walking around its streets, attending a pop-up event or exploring the many free museums or galleries.

5. If you were Provost for the day, what one thing would you do?

Send everyone on an American-summer-camp style retreat full of canoeing, murder mystery games and round-table discussions about personal difficulties. I took part in such a camp last while at the University of Washington (UW) with a program called Unite UW. I think everyone who participated felt it was special environment and had a positive impact on their studies and their time at UW.

My friends because of all they accomplish, despite, and because of, the challenges life throws at them. I am deeply grateful to be surrounded by so many strong, passionate and supportive people, who put time and energy into and their goals, which could be anything from creating a new Critical Race module for BASc or to campaigning for better funding for student mental health at UCL.

I'm quite an open and honest person, so hopefully not much would surprise someone who knew me.

Someone who met me at UCL might be surprised to know that at school I was in the army cadets and can fire a rifle, or make it safe and clean it (which we spent more time doing).