New laser scanning technology is being used by UCL scientists to provide fresh and unprecedented insights into the structure and mass of trees, a development that will help plot how much carbon they absorb and how they might respond to climate change. 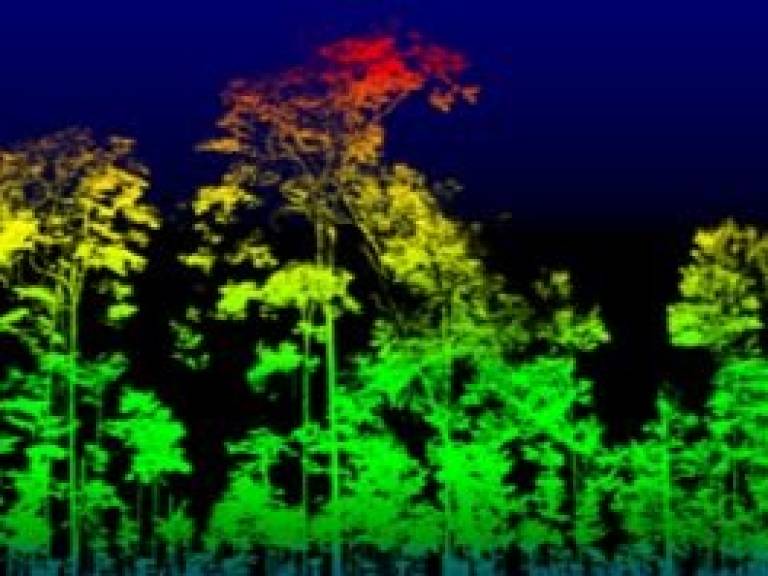 Two studies, published today (Friday) by the Royal Society, by researchers at UCL and the universities of Oxford, Sonoma State, Ghent and Wageningen, reveal the technology has captured the 3D structure of individual trees in ways they have never been seen before.

The new approach pioneered by Dr Mat Disney, Reader in Remote Sensing in UCL's Department of Geography, and colleagues has enabled trees to be "weighed" very accurately by estimating their volume from the precise 3D data.

A seemingly ordinary Sycamore tree in Wytham Woods near Oxford, for example, has been found to have nearly 11km of branches, double that of the much larger tropical trees measured by the team led by Dr Disney. 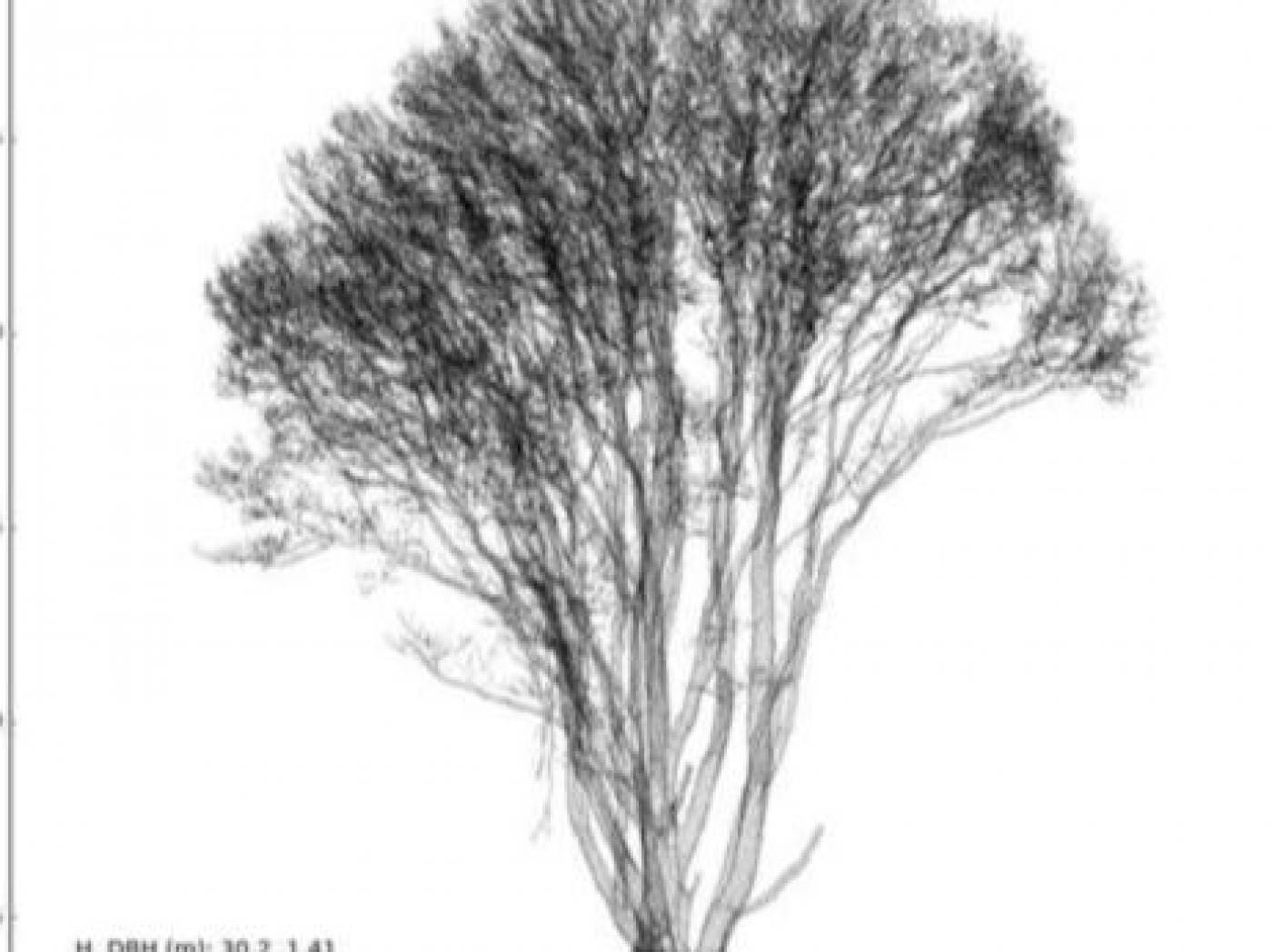 Dr Disney's team, in collaboration with Yadvinder Malhi, a professor of ecosystem science at Oxford University, and the Gabonese National Parks Agency, used the technology to measure a 45m tall Moabi tree in Gabon with its 60m crown. They estimated its weight at about 100 tons, making it the largest tree ever measured like this in the tropics.

Previously, trees could only be weighed by cutting them down or by using other indirect methods such as remote sensing or scaling up from manual measurements of trunk diameter, both of which have potentially large errors.

The new technology provides an important advance in measuring mass which is vital to revealing how much carbon trees absorb during their lifetimes and how they may respond to climate change, according to the papers published in the Royal Society Interface Focus journal.

Accurate assessments of so-called "Above Ground Biomass" (AGB) will underpin international efforts to mitigate the impacts of climate change.

Forests are earmarked to provide a quarter of planned greenhouse gas emission reductions under the United Nations Paris agreement on Climate Change. However, it is thought estimates of tropical forest biomass may be out by as much as 45.2 Gigatonnes of Carbon, equivalent to US $1 trillion.

The new laser technology, which cost between £75,000 and £150,000, can pinpoint branches to an accuracy within millimetres from a range of nearly 1 km. It fires 100,000s laser pulses per second, and energy scattered back to the sensor enables 3D images to be constructed.

This technique has been used by Dr Disney and his team to capture data across the globe, including some of the biggest trees in the world in Borneo, the Amazon and the giant sequoias of California.

Contrasting tropical Brazilian forests and Wytham Woods near Oxford, the 30m-high Sycamore was found to have 10.8km of branch material, more than double that of the tropical Caxiuanã tree which was 25m taller. "The two trees have broadly comparable volumes despite their different height and shape, but their resulting AGB will depend on wood density," say the researchers.

They conclude: "If the accuracy of Terrestrial Laser Scanning (TLS) derived estimates of AGB is demonstrated across a wide range of tree species and forest types, they are likely to become invaluable for monitoring of Carbon stocks and fluxes. This is particularly important for international forest monitoring and protection agreements."

Dr Disney has also deployed his technology as part of a BBC documentary on Dame Judi Dench's garden where the scanning uncovered a 200-year-old oak which was estimated to weigh about 25 tons and had 260,000 leaves, equivalent to the area covered by three tennis courts.

The paper by the team led by Professor Malhi says the study of tree architecture is "on the brink of a technology-driven revolution" with the arrival of "affordable" and "field-robust" scanning technology.

Until now, tree structure and form had been "fairly neglected" areas of study, due to the difficulty of making useful measurements. However, TLS is opening up that research, providing new insights on how trees metabolise, maximise their ability to capture light, minimise the risk of breaking or tipping in the wind, cope with droughts and boost their chances of pollination and seed dispersal.

"The exquisite branching architecture of many trees is widely observed but until recently it has been difficult to describe this architecture in a robust and quantitative manner that spans scales from trunk to branch tip," they write. "This is an area where TLS has the potential to make major new contributions."

As an example, the paper compares seed disposal by two trees, a moabi in Gabon, that grows to huge heights and drops its fruit with a giant thud to attract elephants that then eat it, and a dipterocarp in Malaysian Borneo, which disperses its seeds on the wind. 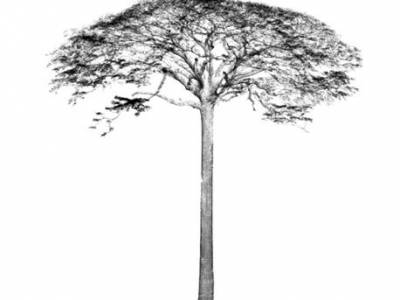 "The broad stretching crown and massive branches of the moabi are well suited for dropping these heavy fruits from a great height and wide spread from the tree," they write. "The crown of the dipterocarp is smaller with sparse clusters of leaves, enabling the tree to be taller for a given degree of mechanical strain and giving seeds easy access to wind gusts."

The paper says the structural measurements provided by TLS could be used to model important drivers of forest change such as wind damage by analysing how and when trees might break from particular gust speeds, something that has previously been hard to understand due to the lack of data.