Measuring Christmas spirit in the brain

Pictures with a Christmas subject produce a stronger brain reaction than generic ones, according to research from UCL. 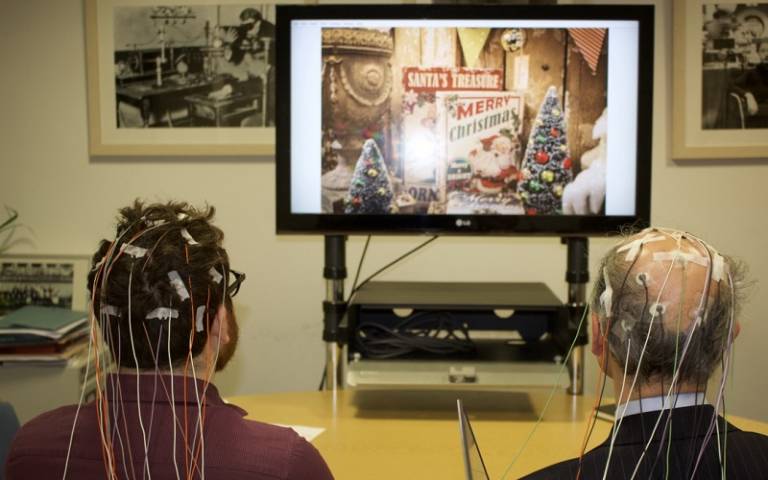 Less obvious Christmas images such as a roaring fire with a plate of mince pies next to it produced an around 10% larger response than for obvious images of Father Christmas, meaning they required more intensive cognitive processing to more complex stimulation. The average response was around 30% larger for pictures than for a black screen.

Researchers in the Department for Medical Physics & Biomedical Engineering used electroencephalogram (EEG) electrodes placed on the scalp to measure event-related potentials (ERPs) – electrical activity occurring as a response to specific events or stimuli.

They also used Electrical Impedance Tomography (EIT), which is an emerging, non-invasive method of medical imaging that uses electrodes to deliver a series of safe, low doses of current.

“It was interesting that the ‘hinted’ images, where the presence of Santa Claus was suggested but he wasn’t shown in person, evoked a stronger response than where he was featured in the picture,” commented Dr Kirill Aristovich (UCL Medical Physics & Biomedical Engineering).

“These were all adult subjects too, so it almost suggests that even when you have long since given up believing in Santa Claus, the magic of Christmas never really disappears. It was the mythical promise of Santa Claus arriving that seemed to appeal to our subjects, rather than the reality. Once Santa Claus shows himself, the magic seems to die.”

EIT can be used alongside conventional EEG methods and is beginning to be used for imaging healthy brain activity and pathology in patients affected by epilepsy, stroke and brain injury. Data from the EIT imaging will help the team to improve the technique and transfer it to clinical use.

“We were expecting ‘hidden Santa’ to be more exciting than ‘obvious Santa’ because higher-order neural processing between perception, storage in memory and emotional components of hinted information induce a significantly larger cortical response observed with EEG.”

The study involved twelve volunteers made up of staff and students from the department. Subjects were seated for the experiment with 18 electrodes placed on the forehead according to the standard 10-20 International EEG montage.

There were 50 randomly generated stimuli for each group, separated with black screen and presented for five seconds.

Many studies have found a relationship between electrical activity in the brain and processes such as alertness, arousal, attention, memory and cognitive processing.

ERPs are thought to reflect the summed activity of all the electrical responses in the brain when thousands of millions of neurons in the cerebral cortex all fire at once while processing information.