Cattle were being used to pull loads as early as 6,000 BC according to new research led by UCL, providing the earliest systematic evidence of animals being used as engines. 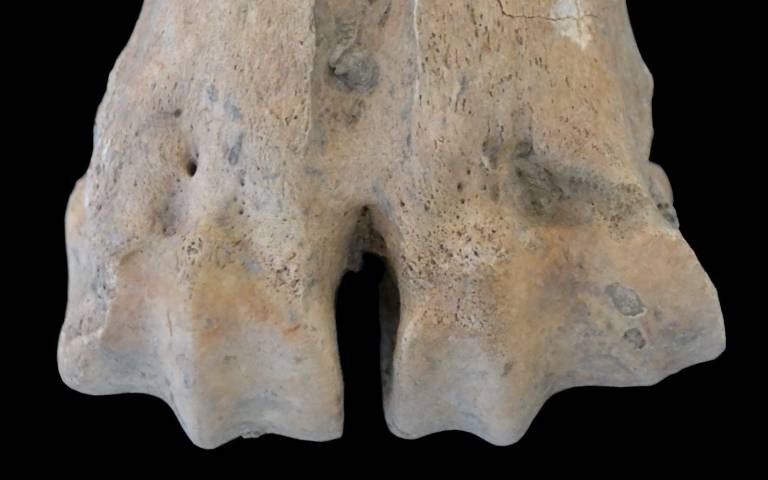 In the study, published in Antiquity, archaeologists discovered that the bones in the feet of Neolithic cattle demonstrated distinctive wear patterns, indicative of exploitation as ‘animal engines’. If these practices can be proven elsewhere, it is expected to have major ramifications on our understanding of animal use in the Neolithic.

Lead author Dr Jane Gaastra (UCL Archaeology), said: “We have been able to provide the first conclusive evidence that farmers were using cattle for ‘traction’ almost 2,000 years earlier than the previous consensus date. There has only been one other foot sample from the Neolithic period found in Syria but this was inconclusive.

“The part of the Balkans where we found the bones was heavy forested in the Neolithic period, so chopping trees to create settlements would have required lot of man power. Cattle would therefore have been a vital asset helping to transport items such timber for housing.”

The study was conducted in the central and western Balkans and shows that the earliest European farmers were not simply using cattle as a source of meat or dairy products, but also as a source of propulsion. The findings indicate that traction in some form, and not necessarily through the use of ploughs or wagons, was present much earlier than previously thought.

Most other studies have focused on the use of traction in much later periods, because it has often been conflated with ploughing or the use of carts which came much later.

Fundamentally, however, traction is the use of animals as engines to pull loads. While ploughing and cartage are forms of traction, they represent only two types of activity on a much broader spectrum of exploitive practices from specialised animals bred and used for regular work through to animals used for more occasional pulling activities, or for regular labour over a short number of years.

Co-author Dr Marc Vander Linden (formerly of UCL Archaeology, now at University of Cambridge), said: “Until now it has generally been considered that traction only emerged by the 5th and 4th millennium BC, parallel to the introduction of the plough and the wheel, but our study demonstrates that this is not the case.

“We reveal that when the wheel and the plough became available farmers were already experienced in using cattle for traction, and this could have facilitated the spread of these innovations.”

The researchers investigated 12 cattle foot bone samples, from both male and female cattle (predominantly cows), from 11 Neolithic sites in the central and western Balkans (modern-day Croatia, Serbia, Romania and Bosnia-Herzegovina) spanning from 6,000 to 4,500 BC. The sites were open air settlements from multiple phases of the Neolithic.

Foot bone was chosen as it is most affected by the stress of pulling and happens to be most commonly preserved in the archaeological record. In determining traction, the archaeologists were looking for extra bone growth in the inner part of the foot, as this is typically where the foot takes most of the load.

The researchers hope to replicate the study in other European regions to determine the extent and duration of this form of traction. It is still unknown whether this form of traction is seen in only a selection of Neolithic groups or was a common practice across Europe. A firm understanding of the nature of early traction evidence in prehistoric Europe has significant implications for our knowledge of both management practices and the nature of labour and movement in prehistoric societies.

Dr Gaastra concluded: “What is now needed is a wider comparative assessment of sub-pathological evidence for cattle traction in Neolithic (and post-Neolithic) Europe to determine both how widely this pattern of early traction was distributed and at what point we begin to see evidence for specialised heavy-traction animals.”

The project is funded under the European Union’s Seventh Framework Programme, Social Science and Humanities Research Council of Canada and the University of Manitoba, the International Research and Exchanges Board of Washington, D.C. and the Fulbright-Hayes Program.