UCL particle physicists are celebrating that the ATLAS Collaboration at CERN's Large Hadron Collider (LHC) has - at long last - observed the Higgs boson decaying into a pair of bottom (b) quarks. 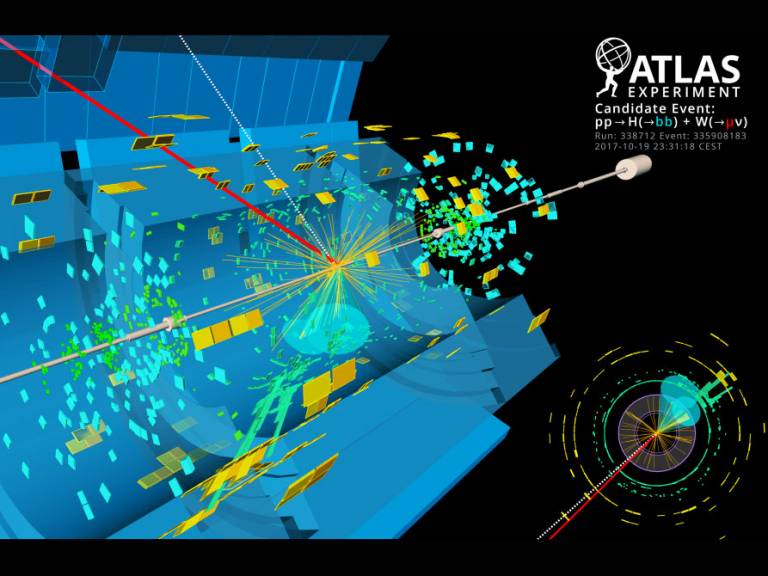 The elusive interaction is predicted to make up almost 60% of the Higgs boson decays.

"Finding the Higgs in its favoured decay channel was one of the key missing items in our knowledge of the Higgs boson. It opens a new window into our understanding of this intriguing particle and could ultimately provide the first hints of new physics beyond our current theories," said Dr Tim Scanlon (UCL Physics & Astronomy) who has played a leading role in Higgs searches on both the DZero (Tevatron, Fermilab) and ATLAS (Large Hadron Collider, CERN) experiments over the past 16 years.

"This is the accumulation of the work of a lot of people over the last seven years, where each new result has built upon the last one, so it is fantastic for all those people who have been involved over the years to finally observe this critical decay."

UCL has played a critical role in the analysis of data alongside other UK groups from the Universities of Birmingham, Glasgow, Liverpool, Queen Mary and Oxford.

This includes work on the key detector elements, reconstruction algorithms, data collection and cutting-edge analysis techniques, with Dr Scanlon also leading the group over a key period, all of which culminated in this historic achievement that marks a crucial step forward in our understanding of the Higgs boson.

"While the result is certainly a confirmation of the Standard Model, it is equally a triumph for our analysis teams. During the early preparations of the LHC, there were doubts on whether this observation could be achieved. Our success is thanks to the excellent performance of the LHC and the ATLAS detector, and the application of highly sophisticated analysis techniques to our large dataset."

The announcement comes just six years after the Higgs boson was first detected and the observation comes ten years after a new way of carrying out the search, by focussing on regions where the Higgs boson is produced with a very high momentum, was proposed by Professor Jon Butterworth (UCL Physics & Astronomy).

"It's really satisfying that some of the ideas we came up with ten years ago turned out to be useful here," said Professor Butterworth.

"Although most of the credit goes to those who have been struggling to collect the data and unpick these decays from inside it."

The UCL team have mostly targeted the decays of the W boson into an electron and muon and a corresponding neutrino, as well as working on the algorithms which identify jets containing b-quarks and the underlying algorithms which reconstruct the jets.

Dr Scanlon, who led the analysis group when evidence for this decay was found (2017), is one of the main editors of the observation paper and has been a co-editor on four of the public results for this analysis.

Dr Andrew Bell (UCL Physics & Astronomy) also made significant contributions to this result from being one of the three lead data analysers, a critical member of the statistical analysis team and led the effort to understand the modelling of the background processes in this analysis, which assesses how well the scientists understand their simulation of the key backgrounds.

"The confirmation of the coupling of the Higgs boson to the quark sector of the Standard Model has been one of the key physics aims of Run-2 of the LHC. The result has only been made possible by the work of countless people over many years, and it's great that UCL has contributed so strongly to such a high-profile result," said Dr Bell.

The announcement is a new confirmation of the so-called "Yukawa couplings". Similar to the Higgs mechanism, these couplings to the Higgs field provide mass to charged fermions (quarks and leptons), which are the building blocks of matter.

Combined analyses of the Run-1 and Run-2 datasets have resulted in the first measurements of these couplings, as seen in the recent ATLAS observation of Higgs boson production in association with a top-quark pair and the observation of the Higgs boson decaying into pairs of tau leptons.

The result also establishes, for the first time, the production of a Higgs boson in association with a vector boson above five standard deviations.

"We now have the opportunity to study the Higgs boson in unprecedented detail and will be able to further challenge the Standard Model," concluded Professor Jakobs.