Unlocking the secrets of ice

The complex properties of water and ice are not well understood but a team from UCL and the ISIS Neutron and Muon Source have revealed new information about a phase of ice called 'ice II'. 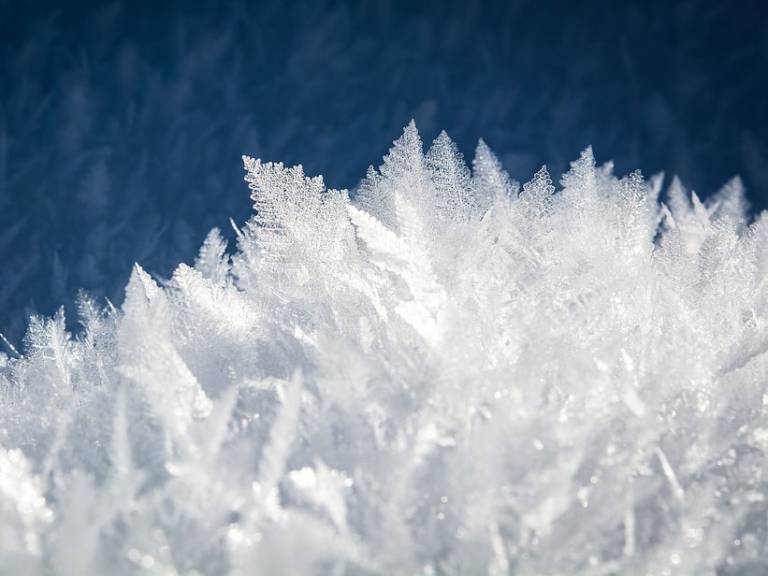 Given that water makes up 60% of our bodies and is one of the most abundant molecules in the universe, it's no wonder that water is known as the "matrix of life".

As water freezes its molecules rearrange themselves, and high pressure causes the molecules to rearrange in different ways than they normally would. The many distinct phases of ice can be summarised using a phase diagram, which shows the preferred physical states of matter at different temperatures and pressures.

Their surprising results, published in Nature Physics, found the addition of this impurity caused a particular phase of ice, known as ice II, to completely disappear from water's phase diagram whereas the other phases were unaffected.

Ice II is a hydrogen-ordered phase of ice that forms under conditions of high pressure. Unlike other phases of ice, ice II remains thermodynamically stable and hydrogen-ordered up to very high temperatures and the origin of this anomalous result is not well understood.

Using neutron diffraction the group revealed the very special properties of ice II. The PEARL high pressure neutron diffractometer at ISIS Neutron and Muon Source is optimised for diffraction studies up to 20 GPa, though here samples were only exposed to 0.3 GPa. Even though this is well below the full capability of the instrument 0.3 GPa is still equivalent to 3 tonnes pressing down on a single fingernail.

"Without in-situ neutron diffraction we could not have performed this study. It was paramount to demonstrate that ice II has disappeared in the region of the phase diagram where it would normally exist," said Dr Christoph G. Salzmann (UCL Chemistry).

"Unlike the other phases, ice II is topologically constraint. This means that water molecules in ice II interact with each other over very long distances. In a sense, whatever happens to one water molecule in a crystal of ice II - the effect is "felt" by all other molecules. In our study, ice II experiences a disturbance by the ammonium fluoride which destabilises all of the ice II and makes it disappear," Dr Salzmann added.

The knowledge of this effect will be of importance to any study where ice coexists with other materials in nature, for example on icy moons. In addition, the special properties of ice II provide a new explanation as to why the phase diagram of water displays so many anomalies, including liquid water. These findings may also open up studies into new phases of ice. If dopants have the ability to suppress certain phases of ice this suggests they may also be able to induce the formation of new phases of ice.

Interest in the "matrix of life", and its many phases of ice, certainly shows no sign of wavering. With high pressure neutron diffraction allowing the study of extreme pressure environments in a way that no other technique can, we are likely to see the team back at the facility in search of new phases of ice.