A newly discovered species of ocean plankton, Syracosphaera azureaplaneta, has been named by UCL researchers in honour of the critically acclaimed BBC Blue Planet series and its presenter Sir David Attenborough. 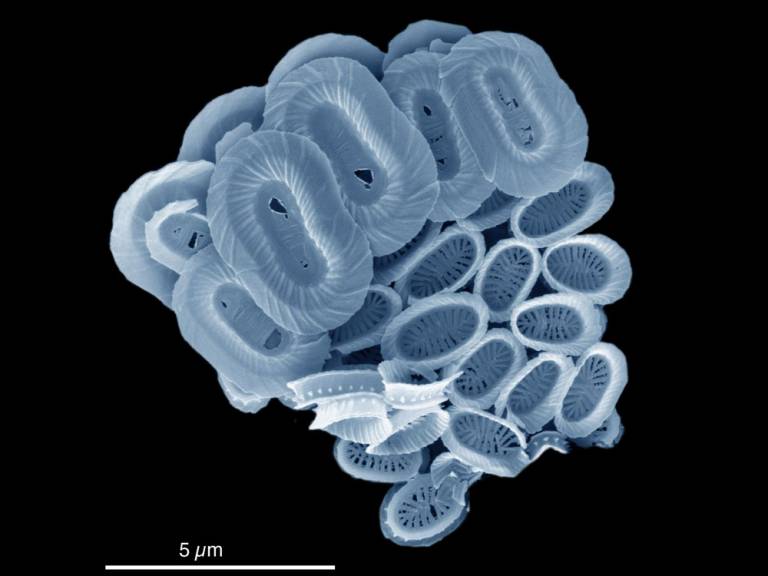 Although measuring only thousandths of a millimetre, these plankton play a pivotal role in marine ecosystems as a crucial source of food for many ocean dwelling organisms. They are also incredibly valuable for studying the impact of climate change on ocean life now and across the previous 220 million years.

The plankton - called coccolithophores - are single cells surrounded by a calcite shell that varies drastically in shape across different species, acting as armour against predators.

"Although microscopic, the plankton are so abundant that they are visible from space as swirling blooms in the surface oceans, and form our most iconic rocks with their calcite forms making up the bulk of the white chalk cliffs and downs of southern England," explained study co-author Professor Paul Bown (UCL Earth Sciences).

It is the ability to produce this calcite shell that is being disrupted through ocean acidification. Ocean acidification is a symptom of climate change whereby rising atmospheric carbon dioxide is absorbed by the ocean, increasing its acidity.

By studying fossilised plankton shells or 'coccoliths' in samples from drilling down deep into the ocean bed, scientists can map the impact of climate change and other global events over a very long period of time and use this to inform what might happen to in the future.

Recent research, studying both fossil and modern coccolithophores, has shown that these plankton are resilient to global warming and ocean acidification but increases in carbon dioxide in the atmosphere impairs their growth rates and overall production.

"The negative impact of increases in carbon dioxide on the growth rate and numbers of plankton could have serious food supply implications for ocean organisms as they form the base of the food chain with many larger creatures dependent on them including fish and whales.

"The plankton also take carbon out of the atmosphere to use as energy and so their demise may increase carbon dioxide levels further, compounding the issue," explained Dr Jeremy Young (UCL Earth Sciences), co-author of the study.

The discovery involving researchers from UCL, Institut de Ciencias del Mar (Barcelona, Spain), Kochi University and Yamagata University (both Japan) was published today in Journal of Nannoplankton Research. The paper describes the new species which was discovered living in the South Atlantic Ocean today and highlights the two distinctive coccoliths that form the plankton's shell.

It follows the characterisation of about 400 new species of plankton microfossils by UCL researchers which are available to see in an open-access online library called Nannotax. This includes images of the entire ancient and modern diversity of plankton across ~4500 species.

UCL scientists have been at the forefront of this field since the 1960s, when the earliest scanning electron microscopes first revealed plankton's exquisite and elaborate calcium-based forms.

"We have a real heritage in describing plankton and being at the forefront of using these discoveries to map the impact of climate change and health of our oceans over millions of years," explained Professor Lars Stixrude, Head of UCL Earth Sciences.

"It is therefore fitting that we are naming our latest discovery, Syracosphaera azureaplaneta, after Blue Planet as Sir David officially opens the newly refurbished Kathleen Lonsdale Building at UCL which fully accommodates our researchers and students from our Earth Sciences department for the first time."

Sir David was guest of honour at the opening ceremony today where he gave a talk on the importance of earth sciences and was presented with a sculpture of the plankton.

He met with staff and students to discuss their world-leading research into a wide-range of areas from the world's oldest fossils, the impact of climate change on the planet, subatomic particles, smart materials and the furthest reaches of space.

"It was a pleasure to welcome Sir David to UCL and share the exceptional work of our staff and students with him. We are at the forefront of discoveries that push the boundaries of human knowledge through researching our universe logically, experimentally and mathematically," said Professor Ivan Parkin, Dean of UCL Mathematical & Physical Sciences.

"It's fantastic that the world-class outputs of Earth Sciences, Physics, Astronomy and Chemistry are now supported by improved teaching, research and social learning spaces. We eagerly anticipate the benefits these bring to students and staff now and in the future."

The refurbishment of the Kathleen Lonsdale Building (KLB) is part of UCL Estates' £1.2bn capital programme, Transforming UCL. The KLB was constructed in 1915 as the first purpose built Chemistry building for UCL and its refurbishment has sensitively blended the old and new to create high quality workspaces with modern facilities.

Image gallery of the event