Hopes for continued close research links between the UK and the EU after Brexit have risen after a top EU commissioner declared that securing a deal on it is "a no brainer". 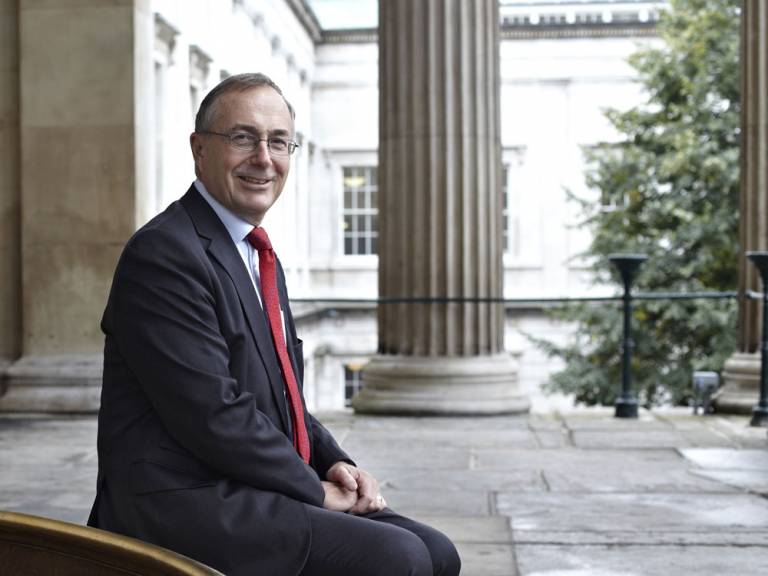 The comments came at a panel discussion in Brussels where President & Provost Professor Michael Arthur also outlined his vision for a post-Brexit settlement that would enable the UK and Europe to compete with established and rising research nations such as the US and China.

He was in Brussels as part of a vice-chancellors' delegation pressing for continued research collaboration post-Brexit following the government's new position paper which called for a "far-reaching science and innovation agreement with the EU."

At the panel discussion, the provost, who chairs the Europe group for the Russell Group of 24 leading universities, welcomed the government's announcement as coinciding with what the universities wanted: "If we want European science to be globally competitive, it would be our view that it would be much better to make a future arrangement that includes [UK universities] rather than excludes us."

Asked about the UK's proposals, Carlos Moedas, EU commissioner for Research, Science and Innovation, said: "The UK needs us and we need them in terms of research, science and innovation. We have to find a solution."

Talks on it would, however, have to wait until issues relating to freedom of movement, the divorce bill and the Northern Ireland border had been resolved in the first phase of EU-UK discussions. "We will have to wait for [negotiations on research] and then I am sure we will find a solution in this area," said Commissioner Moedas. "We have to have a relationship that works. I think research, science and innovation is a no brainer that we have to have a relationship that works."

At the panel discussion, entitled Innovation Matters: Debating priorities for a competitive Europe, and hosted by Science Business, Professor Arthur outlined a vision for a post-Brexit framework where Britain was intimately involved in shaping and developing European research as an "associate" country to the EU, similar to but perhaps better than Norway, Switzerland and Israel.

"It is our view that if British science is to be competitive with the US, China and many other nations who are rising, then we have to work together. So we are looking for an arrangement that allows us to do that.

"When I have been talking to various groups here in Brussels, I have been using the phrase 'associated country plus' [to define our post Brexit relationship with the EU]. 'What is the plus?' is to be discussed.

"It's interacting with the system in a meaningful and effective way to influence its future for the better for the both of us from Europe and the UK. It's about having a seat at the table and at the discussion.

"I guess the detail will be in the way in which this actually shapes up and precisely what the government means when it says it wants a better relationship [on research) with the EU than any other non-EU country."

Others suggested the government's position paper remained vague - and made no reference to issues such as freedom of movement of academics, or research students.

Kurt Deketelaere, secretary general of the League of European Research Universities, said UK position paper should be read in tandem with the hard Brexit proposals in a Home office document leaked to the Guardian which will end the free movement of labour after Brexit. Those in highly skilled professions - likely to include researchers - would be granted work permits for three to five years. It also set an aim for "some restrictions" on EU students, such as checks on their "academic ability, English language skills and sufficiency of funds".

The "whole migration policy will be absolutely decisive for what is possible on research", said Professor Deketelaere. He added: "If I'm a top researcher with a huge status and I read what is in The Guardian about this document, I would say 'this [the UK] is the last country I'm going to go to'."

Professor Deketelaere said that the paper maintained near "silence" on the highly prestigious European Research Council, which he attributed to the fact that ERC grant holders are required to spend at least 50% of their working time in an EU member state or associated country, with a substantial proportion of the UK's ERC grant holders being non-UK nationals. The UK government paper mixed "wishful thinking, window dressing" and things "impossible under current EU law", he said.

Professor Arthur said universities had been pushing the government hard on freedom of movement and were "desperate" for an early resolution of the sticking point issues in the first phase of UK-EU negotiations."I will suggest that research, innovation and science should be a win-win all around and it should not be that difficult to come up with an arrangement that works for both [the UK and EU]."

Following the government's announcement on Wednesday, Dr Tim Bradshaw, acting Director of the Russell Group, also gave a cautious welcome to the government's position paper: "Now that the government is clearly serious about securing a positive outcome for science from the Brexit negotiations, a good first step will be to ensure UK organisations can continue participating in the Horizon 2020 programme until its end. We urge the UK government to secure an agreement with the EU which will allow our universities to remain core partners in European research projects from the day we leave the EU."