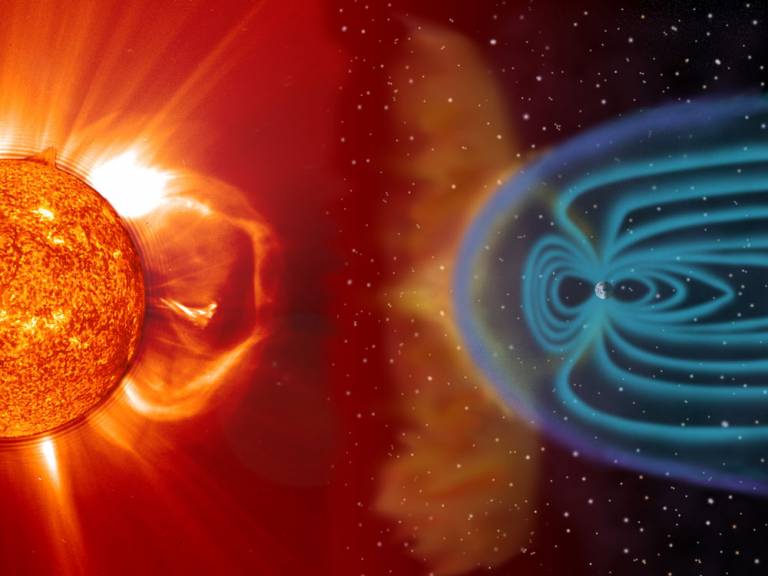 The £3 million will support UCL researchers and their collaborators in leading the development of a major science instrument for SMILE which is due to launch at the end of 2021.

"SMILE is a most innovative space mission dedicated to study the impact of the solar wind on the Earth's magnetic environment. It will explore scientifically what drives space weather and return knowledge that will eventually lead to mitigating its effects," said Professor Graziella Branduardi-Raymont, mission Co-Principal Investigator (UCL Mullard Space Science Laboratory).

The magnetic environment or 'magnetosphere' is a vast region around our planet that protects us from solar wind and cosmic particle radiation. The Earth's magnetosphere is the strongest among all the rocky planets in our solar system and its protective role is thought to have played a key role in the Earth's habitability.

SMILE will provide a step change in understanding its behaviour under the impact of the solar wind, and will serve a broad range of research communities in which the UK is world leading, including solar, fundamental physics, heliophysics, and planetary sciences.

SMILE will also provide crucial improvements to the modelling of space weather, which is recognised in the Government's National Risk Register as a key disruptive threat to the UK national technological infrastructure.

Science Minister, Jo Johnson, said: "Satellites, power grids and communications networks are integral to our modern lives and through this funding, we are ensuring UK academics continue to lead international research in solar-terrestrial science and space weather. This will help us gain a greater understanding of its causes and behaviour - helping us to better prepare and protect our vital infrastructure from its effects.

"SMILE is a prime example of scientific innovation underpinning the broader economy with real-world applications, a key foundation of our Industrial Strategy."

The UK Space Agency's investment will support three UK academic groups for the next two years, and is planned to be extended to support the mission throughout its development. It will enable  the overall scientific leadership role on the European side by Professor Branduardi-Raymont, at UCL MSSL, as well as the hardware contributions to the payload by the UCL MSSL team, and the design and development of the mission's most innovative science instrument, the SXI (Soft X-ray Imager), led by Dr Steven Sembay at the University of Leicester.

Professor Andrew Holland (Open University) will also oversee the development of the SXI detectors by Teledyne e2v Ltd, a word renowned UK-based provider of cutting edge space technology, which has a separate ESA contract to provide the SXI detectors worth €1.5 million.

Thales Alenia Space UK (TAS UK) is also bidding for a major role in the provision of the spacecraft's Payload Module, and has been awarded one of three competitive studies funded by ESA to lead the design definition of this hardware.

The UK Space Agency funded academic roles maximise UK science return by combining privileged access to SMILE science data with intimate instrument knowledge. SMILE builds on a very productive legacy of academic collaboration between the UK and China, and will act as a further high profile pillar of cooperation. The UK roles demonstrate our ongoing international leadership and engagement with world-class science and research.