More than 200 Chinese students graduated from UCL in Beijing at the weekend in the university's first graduation ceremonies held in China. 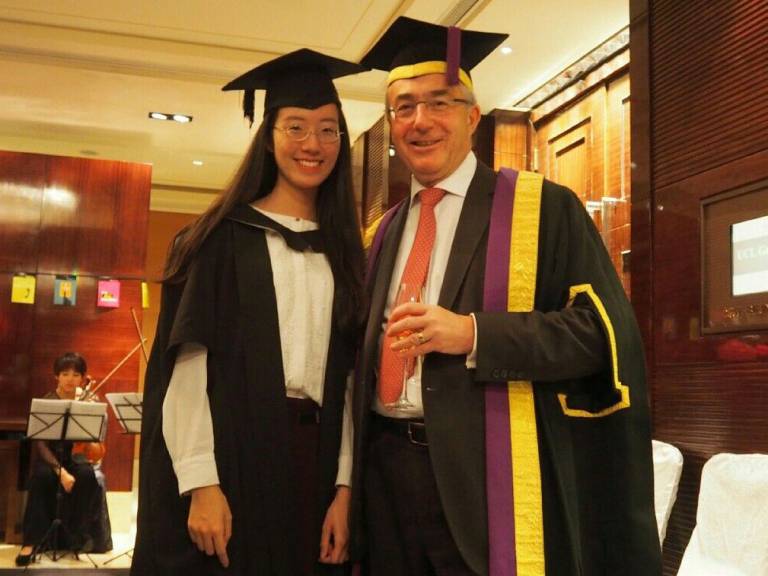 President and Provost Michael Arthur presided over the two ceremonies in the Four Seasons hotel as Professor Katharine Carruthers, director of the UCL IOE Confucius Institute, greeted them in Chinese and read out their names. Professor Alan Thompson, dean of the Faculty of Brain Sciences, gave the closing address.

Professor Arthur told the assembled students, some of whom had travelled hundreds of miles with their families and friends: "Today represents UCL's first ever graduation ceremony in China and we are honoured to be holding it in Beijing. Today we are making history.

"We absolutely cherish our close relationship with China. Every year UCL welcomes thousands of students from China to study at undergraduate and postgraduate level. This year 3,664 students enrolled from China. So to be able to celebrate with some of you today in your own country is a huge honour."

Admitting he was a "little biased" in his assessment of UCL, he told them they were graduating from "one of the best universities in the world" before going on to quote advice from Confucius.

"I would like you to think of Confucius's advice as you work out what to do with your life and your career. My challenge to you is to ask you a simple question: 'What difference will you make to the world we live in?' I believe you can and will make a significant contribution to your field of interest, your profession, your community and nation and to our world and its peoples."

The two hour-long ceremonies - one in the morning and one in the afternoon - were followed in the evening by the Beijing alumni club's annual gala dinner, which was addressed by Professor Arthur and Professor Thompson, who outlined UCL's work to improve the lives of those suffering from dementia and depression.

It was the culmination of a week-long trip to China, also taking in Hong Kong and Shanghai, to forge deeper links with China and develop UCL's strategic partnership with Peking University (PKU).

Graduation ceremonies have been held previously overseas at UCL campuses in Qatar, Australia and Kazakhstan (where it was limited to a graduation from the foundation programme). The China event was the first overseas at which the Provost personally officiated and where there was no campus.