UCL-PKU in partnership to transform teaching Mandarin in English schools

UCL in partnership with Peking University (PKU) is leading a transformation in the teaching of Mandarin in England's classrooms with the aim of giving every secondary school the chance to offer the language alongside the traditional staples of French, Spanish and German. Some 9,000 students in 45 Confucius classrooms established by the UCL Institute for Education (IOE) Confucius Institute are now studying Chinese on the curriculum with about 3,500 entries for Chinese GCSE in 2016, representing a rise of 70% since 2008.

The IOE Confucius Institute is a bilateral collaboration between UCL, PKU and Peking University High School, both training teachers and masterminding the expansion of Chinese language teaching in schools; this work is also supported by the UK and Chinese Governments and British Council.

There are now 37 schools across England participating in the Government's Mandarin Excellence Programme run by the IOE Confucius Institute in partnership with the British Council. Progress test results showed the first cohort of Year 7 pupils (11/12 year-olds) achieved marks of at least 80% across specially-created tests in reading, writing, listening and speaking.

The pupils on the programme spend an average of eight hours a week studying the language, half taught in the classroom and half in their own study time, which is more than would be normally spent in school on a language. Year 7 pupils would usually learn a language for just one to two hours per week. The programme aims to have 5,000 pupils on track to be fluent in the language by 2020.

In tandem, the IOE's Confucius Institute is cascading out a new generation of specially-trained Mandarin teachers. It is the only institution in Britain offering a Mandarin teaching specialist pathway. This year the IOE has 15 on its postgraduate (PGCE Mandarin) teacher training courses. In the lifetime of the Mandarin Excellence Programme, the aim is to train 70 new teachers through the Mandarin Language PGCE at IOE's Confucius Institute with the other 30 trained through other channels such as Schools Direct, and other universities with support from us as required. The IOE Confucius Institute has also developed a specific Mandarin module for the IOE's successful Mteach programme.

"We want to be a teacher training hub nationally for the teaching of Chinese in schools but also in Anglophone countries to extend training beyond the UK," said Katharine Carruthers, director of the IOE Confucius Institute.

She said there was evidence that teaching Mandarin had a wider benefit in schools: "One school's chairman of governors was keen to get the Mandarin Excellence programme on board. Ofsted went in at the beginning of term and talked about the programme changing attitudes. Hanban teachers from China also play a vital supporting role.

The Mandarin Chinese teacher training hub was officially launched by the respective presidents of PKU and UCL, Professor Lin Jianhua and Professor Michael Arthur the 10th anniversary of the founding of IOE Confucius Institute. Professor Arthur said it would "play a key role in enabling the teaching and learning of Mandarin in England and have huge long-term benefits for children and young people as well as for the development of bilateral relationships between the UK and China."

Professor Lin Jianhua said PKU was delighted to be "working with UCL to promote Chinese culture and language in the UK, as part of our deep strategic partnership."

Nick Gibb, education minister responsible for standards, said: "Mandarin Chinese is an important language to learn in our globally competitive economy. I am pleased that this programme (MEP) is continuing to grow, allowing more pupils to be taught Mandarin at an advanced level.

"This will give them a significant advantage when competing in the global jobs market and is particularly important as we prepare to leave the EU.

Mark Herbert, Head of Schools Programmes at the British Council, said: "Mandarin Chinese is one of the languages that matters most to the UK's prosperity - and its importance is only likely to increase as the UK repositions itself on the world stage.

"If the UK is to remain globally competitive, we need far more young people leaving school with a good grasp of Mandarin in order to successfully work abroad or for businesses here in the UK. More than that, learning Mandarin is a fascinating process which creates a connection to the amazing Chinese culture and over a billion Chinese speakers globally."

Three projects to help meet the ambition of every child in England getting the opportunity to learn Chinese were unveiled this week when UCL signed a new memorandum of understanding with Hanban, the Beijing-based agency that promotes the teaching of Chinese. 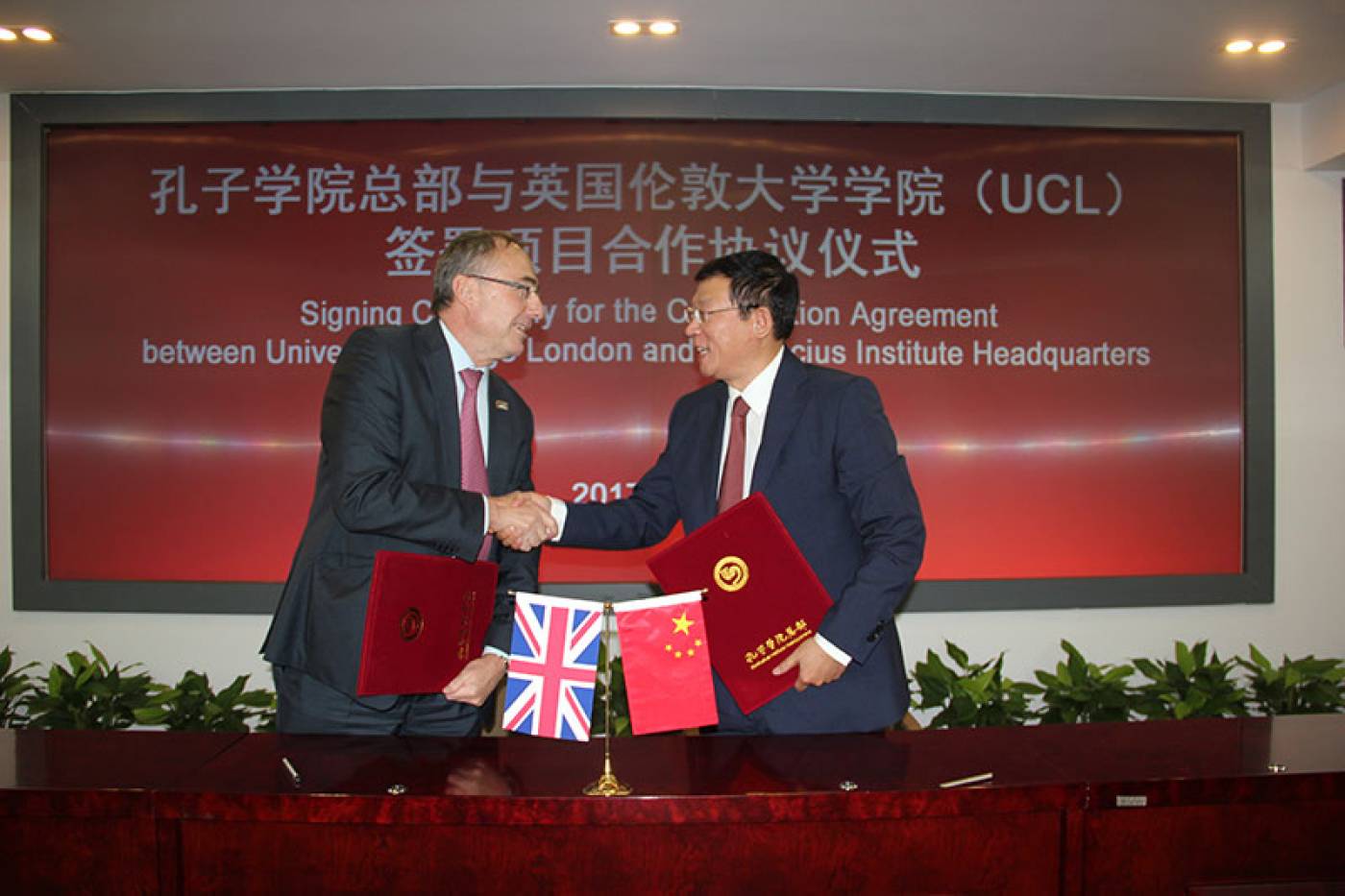 In a speech at Hanban's HQ, UCL President & Provost, Professor Michael Arthur, outlined three initiatives focused on teacher training and disseminating good practice as he declared: "There is much work remaining to realise our ambition of every child in England having the opportunity to learn Chinese, should they wish to do so."

It followed a ceremony signing the memorandum committing UCL to work with Hanban through the UCL Institute of Education's Confucius Institute which officials at the Chinese agency described as one of the best in the world.

The first of the three projects will see the creation of a Chinese observatory to collect, analyse and disseminate information and successful practices in developing Chinese teaching in England and eventually in other Anglophone countries.

Thirdly, working with Peking University's (PKU) School of Chinese as a Second Language - which the Provost and his delegation of academics also visited this week - the UCL Confucius Institute will also develop teaching materials including a video to help teachers in the classroom.

Professor Arthur said: "During its first decade, the Confucius Institute has been able to act as a catalyst for change in the teaching and learning of Chinese language in schools but also has acged as a very positive influence in the development of UCL's deep and meaningful partnership with Peking University."

Katharine Carruthers, director of the Confucius Institute, said it was on target in its Mandarin Excellence Programme with 400 students recruited in the first year and another 1000 this year. She distributed examples of the children's work to demonstrate to the Hanban audience how "highly motivated" the students were.

"It shows we can learn foreign languages if you give children enough time," she said. "That's motivating for them. It's also motivating for the teachers because it becomes fun for them to teach a class that makes progress."