UCL's efforts to harness new technology in the battle to combat the "timebomb" of dementia worldwide were showcased in China this week. 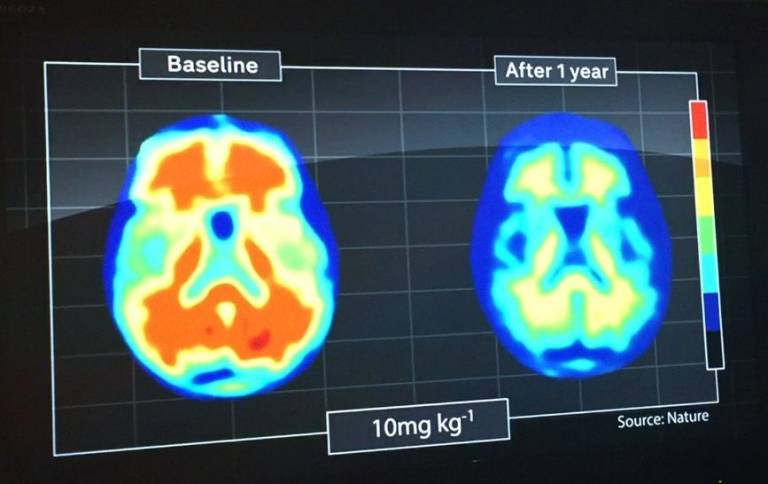 He coupled his review of UCL's cutting edge work in brain sciences with a stark warning about the scale of the problem the world and China faces over dementia.

He was speaking at a Shanghai UCL alumni annual gala night during a visit to Hong Kong, Shanghai and Beijing by the Provost and senior UCL academics to cement the university's ties with China and UCL's strategic partnership with Peking University (PKU).

Professor Thompson said the human tragedy of dementia that China faced was huge with the number of people aged over 80 expected to reach 90m by 2050, more than any country in the world.

By 2040, the number of Chinese predicted to be affected by dementia will hit 27m at a cost of US dollars $1 trillion a year, "a terrible human cost…an enormous economic cost" to the country, he told the alumni at the gala.

"Dementia is a timebomb for nations across the world and that's why brain science is a major priority for UCL," said Professor Thompson, who oversaw UCL's successful bid to be the hub for the £250 million UK Dementia Research Institute (UK DRI).

His "first great thinker" from UCL was Professor Gill Livingston who is already working with Zhejiang University to help Chinese families care for those suffering from dementia.

Professor Livingston has developed a new mobile app that enables families to find support and information and discuss their situation with other carers. Some 90% of dementia care is done at home by families in China without any official support.

Professor Livingston's research suggests one in three cases could be prevented through improvements in nine key lifestyle areas including increasing physical activity and social contact, reducing obesity and smoking and managing depression.

"I am positive that her work will lead a transformation in how dementia is understood and managed in China, to the huge benefit of people with the condition and their families," said Professor Thompson.

His "second great thinker" Dr Hugo Spiers had created an interactive online game, called Sea Hero Quest, which provided researchers with the equivalent of five hours of lab-based study if someone played it for just two minutes.

So far 3m have played it, generating the equivalent of 12,000 years of lab-based research. "This is an invaluable wealth of data, creating the first global benchmark for how the human brain navigates," said Professor Thompson.

The technology, which now includes a virtual reality version, will help create a new test for early onset dementia by providing new insights into how the brain works.

"His work is finding symptoms in the brains of people who have suffered from strokes that conventional analysis cannot detect, promising to fast-track a far fuller understanding of the brain and the variations between individuals," said Professor Thompson.

Dr Nachev is also experimenting with an app called Pocket Smile to influence mood and manage depression. Based on research that emotions and expressions happen at the same and can be triggered by each other, it sends a smiling image to a person's phone to improve their mood.

The fourth "great thinker" Professor Sophie Scott argues that, contrary to some critics of social media who claim it is dumbing down human interactions, new modes of communication such as emojis are beneficial in restoring emotional, non-verbal information to our conversations.

Her research into how brains process information from speech and other human sounds includes work on laughter. "She is uncovering how fundamental laughter is to relationships and to reducing stress and regulating our emotions," said Professor Thompson.

"So from apps to virtual reality, neuroimaging to machine learning and even emojis - technology is playing a major role in how we understand our brain. And it is an important tool in predicting, diagnosing and treating the ways in which our brains go wrong."