Professor Sarah Tabrizi, director of the UCL Huntington's Disease Centre at the UCL Institute of Neurology, has received the 2017 International Leslie Gehry Brenner prize for Innovation in Science. 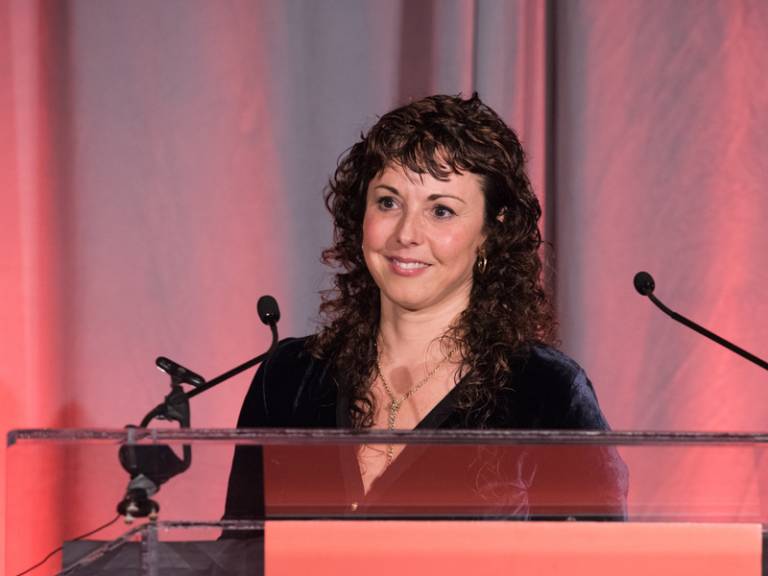 Awarded by the Hereditary Disease Foundation on November 6 in New York, the $100,000 prize is in recognition of "her outstanding contributions to innovative clinical trials and to clinical care for people with Huntington's disease and their families."

The prize was donated by architect Frank Gehry and his family, in memory of his daughter Leslie who died of cancer in 2008.

Professor Tabrizi co-founded the UCL Huntington's Disease Centre in 2016 with Professor Gillian Bates, who won the Leslie Gehry Brenner Award in 2012 for developing the first mouse model of HD.

Professor Tabrizi's research programme seeks to discover effective disease-modifying treatments that prevent or reverse the neurodegenerative process in HD. She leads a research group that follows two distinct but complementary approaches: basic science focusing on cellular mechanisms of neurodegeneration, and a programme to translate those findings into treatments and cures. She and her collaborators have developed means of identifying and measuring the HD gene and its protein in human blood and cerebrospinal fluid (CSF).

She leads a team at the UCL Huntington's Disease Centre that is currently conducting a trial of a novel 'gene silencing' treatment for HD, sponsored by Ionis Pharmaceuticals. It's the world's first trial in patients to slow, stop, prevent or reverse HD, using a method that targets the root cause of the disease, a gene producing a protein called huntingtin.

She has published over 250 peer-reviewed publications to date, she was elected a fellow of the UK Academy of Medical Sciences in 2014, and in 2010 helped set up the UK All-Party Parliamentary Group for HD.

Professor Tabrizi said: "I am honoured to receive this award and I am deeply grateful to the Hereditary Disease Foundation and to the Gehry family for their support of research that seeks to improve the lives of people with hereditary diseases such as Huntington's disease. The award is a testament to the tireless efforts of the UCL HD Centre team and our collaborators as we seek to lead world-class research from bench to bedside. Every year we are getting closer to identifying treatments that could slow down the disease process, and ways to prevent or delay disease onset in HD gene carriers,"

Professor Michael Hanna, Director of the UCL Institute of Neurology, said: "Congratulations to Sarah on this major achievement. We are proud to host the UCL HD Centre at the UCL Institute of Neurology, Queen Square. It is the largest and most productive clinically-focused HD research group in the UK, and is at the forefront of neurodegenerative disease research and has real potential to transform people's lives."

Professor Nancy Wexler, President of the Hereditary Disease Foundation, said, "We are thrilled to present the Leslie Gehry Brenner Prize to Sarah Tabrizi. Professor Tabrizi has channelled her passion for scientific research into discovering ways to prevent or reverse Huntington's Disease.  We thank her and her superb global team for their extraordinary work."