This week the spotlight is on Dr Ellie Cosgrave, Deputy Director of the 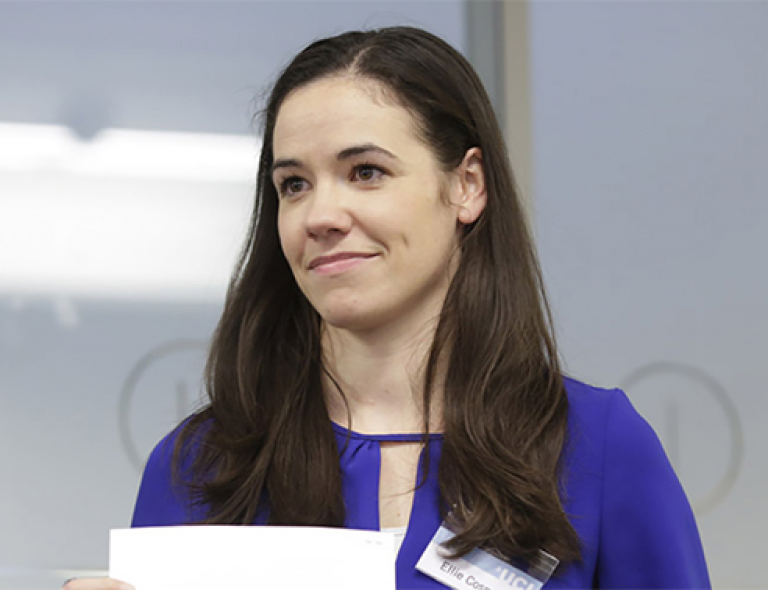 At the City Leadership Laboratory within UCL STEaPP, our core focus is to understand how cities across the world are dealing with big global challenges like climate change, urbanisation, technological innovation and inequality. We want to develop applied research and training that can support city leaders in making decisions today that will shape the future of cities and, most importantly, their inhabitants.

That means I spend a lot of my time developing both research and education partnerships with organisations working on the ground with cities - particularly C40 Cities, UN-Habitat, the Greater London Authority and engineering organisations like Arup and the Institution of Civil Engineers.

Our philosophy at the lab is to combine our research and education work. For example, students on STEaPP's Master's of Public Administration are often set challenges by our partner organisations. For us it's a great way to give our students a taste of the real challenges cities are grappling with right now -  and to be creative about the ways in which they can be addressed.

I am a civil engineer by training and have always been motivated by the role engineers play in changing people's lives. I remember applying to university being very aware of the impact a clean water supply could have on women's access to education and healthcare.

When I graduated from university, I was sure I wanted to leave academia, but was enticed into doing an engineering doctorate with Arup and the University of Bristol. The theme was around how policymakers could use new technology to drive towards more sustainable cities. It was here I found my home in the topic of urban policy and human wellbeing, which remains the core of my work.

I joined UCL three years ago as a postdoctoral researcher on the Liveable Cities research programme; an ambitious five-year programme of research to develop realistic and radical engineering solutions for achieving low-carbon, resource-secure UK cities in a way that maximises wellbeing. I led the work of the policy and governance team, which will deliver its overarching findings in the autumn of this year.

For me, supporting women in engineering has always been a deep passion and I am proud to be the Director and Co-founder of ScienceGrrl - an organisation that supports women in science and engineering careers.

ScienceGrrl came into being nearly five years ago when the European Commission launched its campaign 'Science: it's a girl thing!'. The campaign aimed to encourage girls to study science by offering them images of nail varnish and makeup, and having them being 'checked out' by a man - who, indecently, was the only person in the video who actually seemed to be doing some science. I asked myself why, when discussing scientific careers, it felt normal and appropriate to slip into imagery that reduced women to their looks - and, more worryingly, their sexual appeal.

And I wasn't the only one who felt this way - I met of group of likeminded female scientists and engineers via Twitter and, after swapping email addresses, we began a conversation. We talked of our own experiences of being the only woman at the table, and succeeding in male-dominated environments. We also talked of what inspired us to become scientists or engineers - how we wanted to change the world through getting infrastructure to the poorest places, or how we were fascinated by the whys and hows of the universe. It was inspiring - for some of us it was the first time we'd been able to have these conversations openly, and with people who just seemed to 'get it'. This group of women went on to found ScienceGrrl.

Since its humble beginnings, ScienceGrrl has gone from strength to strength. We now have 17 chapters across the country, have published the Through Both Eyes report, which outlined the hurdles to young women accessing the profession, and we deliver training programmes to companies around the actions they can take to support women in their organisations.

There is still a long way to go in achieving gender parity in science and engineering, but I believe there is reason to be hopeful that things can change. I am proud to have been part of being part of this change.

I have just started a project called Choreographing the City, which I am incredibly excited about. It seeks to understand whether the tools of dance-making could be adopted by the engineering profession, and how that would change the outcomes of large engineering projects.

Catastrophic climate change, creating increasingly extreme weather events as well as rapid urbanisation and globalisation is straining our city infrastructures. Our cities are beginning to buckle under the pressure of growing demand. On top of this, we need our cities to provide fulfilling social and cultural experiences, a sense of community, connection and wellbeing.

While the world is looking to engineers for solutions, traditional engineering is unlikely to deliver the required level of change. We need radical approaches to engineering that challenge our assumptions of what can be achieved.

Dance can potentially provide us with some answers. Choreography and engineering design are both creative processes that are taught formally, developed through practice and experience, have known outputs, physical and economic constraints and desired social outcomes. Both practices deal with curating space, form, flow and personal experience. Yet we can see obvious differences in how choreographers and engineers approach design.

Through a series of interviews and workshops this project seeks to explore what choreographers can teach engineers and urban planners about how to curate and design sustainable urban environments - and how this learning can influence the way our cities function.

I am generally anti-favourites but I'd go for Martha Wainwright's self-named album (Special Edition), mainly because of track 9; for a film: The Magdalene Sisters; and for a book: Alone in Berlin by Hans Fallada.

I'm a fan of basically any cheese joke. Did you hear about the French cheese factory that exploded? De-Brie was everywhere.

Bring on the feminists! I'd love to have Audre Lorde, Bell Hooks, Emmeline Pankhurst, Toni Morrison, Chimamanda Ngozi Adichie, Malala Yousafzai, Jude Kelly, Bridget Christie, Sara Pascoe, Caitlin Moran - the list goes on. But thinking about that crowd is getting me a bit overwhelmed, so I think I'd have to arrange one-to-ones and order some beta blockers.

I spent many years worrying about what other people thought about me and whether or not I fit in. I would tell my younger self that the things about you that you think are most odd are actually the things that make you really special. Never let anyone make you feel silly or inadequate for doing something you believe in.

I'm more sensitive and self-critical than some people realise. Also, cream cheese and marmite bagels - people always seem surprised by this but to me it's the most natural thing in the world.

If I'm not in the dance studio at least once a week, it's sad times.