Sherpas have evolved to become superhuman mountain climbers, extremely efficient at producing the energy to power their bodies even when oxygen is scarce, suggests a new study led by University of Cambridge and UCL researchers, published today in the Proceedings of National Academy of Sciences (PNAS). 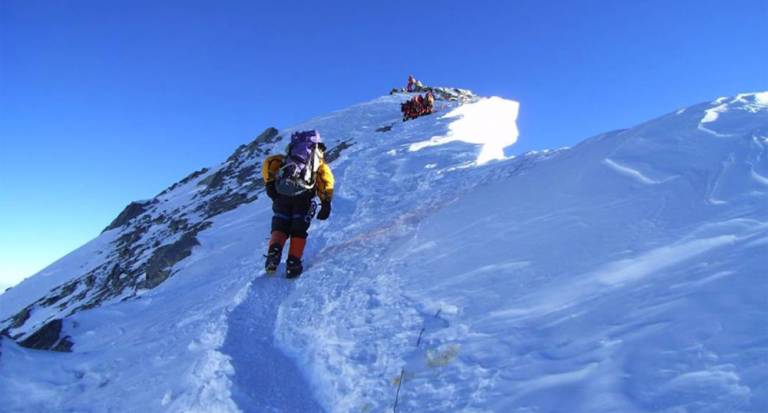 The findings could help scientists develop new ways of treating hypoxia - lack of oxygen - in patients. A significant proportion of patients in intensive care units (ICUs) experience potentially life-threatening hypoxia, a complication associated with conditions from haemorrhage to sepsis.

When oxygen is scarce, the body compensates by producing more red blood cells, which are responsible for carrying oxygen around the body. This makes the blood thicker, however, so it flows more slowly and is more likely to clog up blood vessels.

The research team sought to understand why Sherpas, an ethnic group from the mountain regions of Nepal, are able to live at high altitude with no apparent consequences to their health. Previous studies have suggested differences between Sherpas and people living in non-high altitude areas, known collectively as 'lowlanders', including fewer red blood cells in Sherpas at altitude, but higher levels of nitric oxide, a chemical that opens up blood vessels and keeps blood flowing.

Evidence suggests the first humans were present on the Tibetan Plateau around 30,000 years ago, with the first permanent settlers appearing between 6,000-9,000 years ago, raising the possibility they evolved to adapt to the extreme environment. Recent DNA studies have found genetic differences between Sherpa and Tibetan populations and lowlanders, including differences in mitochondrial DNA, which is key to energy generation.

To understand the metabolic differences between the Sherpas and lowlanders, a team of researchers led by scientists at the University of Cambridge followed two groups on a gradual ascent to Everest Base Camp at an elevation of 5,300m. The expedition, Xtreme Everest 2, was led by Dr Daniel Martin (UCL Surgery & Interventional Science). Xtreme Everest is a project that aims to improve outcomes for people who become critically ill by understanding how our bodies respond to Everest's extreme altitude.

The lowlanders group operated the Everest Base Camp laboratory, where the mitochondrial studies were carried out by James Horscroft and Aleks Kotwica, PhD students at the University of Cambridge. They took samples, including blood and muscle biopsies, in London to give a baseline measurement, then again when they first arrived at Base Camp and a third time after two months at Base Camp. These samples were compared with those taken from 15 Sherpas, all of whom were living in relatively low-lying areas, rather than being the 'elite' high altitude climbers. The Sherpas' baseline measurements were taken at Kathmandu, Nepal.

The researchers found that even at baseline, the Sherpas' mitochondria were more efficient at using oxygen to produce ATP, the energy that powers our bodies.

As predicted from genetic differences, they also found lower levels of fat oxidation in the Sherpas, suggesting they are more efficient at generating energy.

One of the key differences was in levels of phosphocreatine, an energy reserve that acts as a buffer to help muscles contract when no ATP is present. In lowlanders, after two months at high altitude, phosphocreatine levels crash, whereas in Sherpas levels actually increase.

In addition, the team found that while levels of free radicals - molecules created by a lack of oxygen that can damage cells and tissue - increase rapidly at high altitude, at least initially, levels in Sherpas are very low.

"Sherpas have spent thousands of years living at high altitudes, so it should be unsurprising that they have adapted to become more efficient at using oxygen and generating energy," says Dr Andrew Murray from the University of Cambridge, the study's senior author. "When those of us from lower-lying countries spend time at high altitude, our bodies adapt to some extent to become more 'Sherpa-like', but we are no match for their efficiency."

Dr Martin adds: "These findings are an important step forward for our translational research programme. They provide us with an insight as to how Sherpas have adapted to low oxygen levels over countless generations. This new piece of the jigsaw will hopefully lead us towards finding new treatments that will benefit patients in intensive care."

The team say the findings could provide valuable insights to explain why some people suffering from hypoxia fare much worse in emergency situations that others.

"Although lack of oxygen might be viewed as an occupational hazard for mountain climbers, for people in intensive care units it can be life threatening," explains Professor Mike Grocott, Chair of Xtreme Everest from the University of Southampton. "One in five people admitted to intensive care in the UK each year die and even those that survive might never regain their previous quality of life. By understanding how Sherpas are able to survive with low levels of oxygen, we can get clues to help us identify those at greatest risk in ICUs and inform the development of better treatments to help in their recovery."

The 10th anniversary of the original Caudwell Xtreme Everest expedition will be marked this month by a conference at the Royal Society of Medicine, and an event open to the public on the evening of 23rd May at the Royal Geographical Society entitled A Celebration of Six Decades of Medicine on Everest.

The research was part-funded by the British Heart Foundation.