Dr Ed Wild of the UCL Huntington's Disease Centre (UCL Institute of Neurology) has been invited by Pope Francis to attend the Vatican on Thursday 18th May as part of HDdennomore, an event highlighting the plight of Huntington's disease (HD) sufferers around the world. 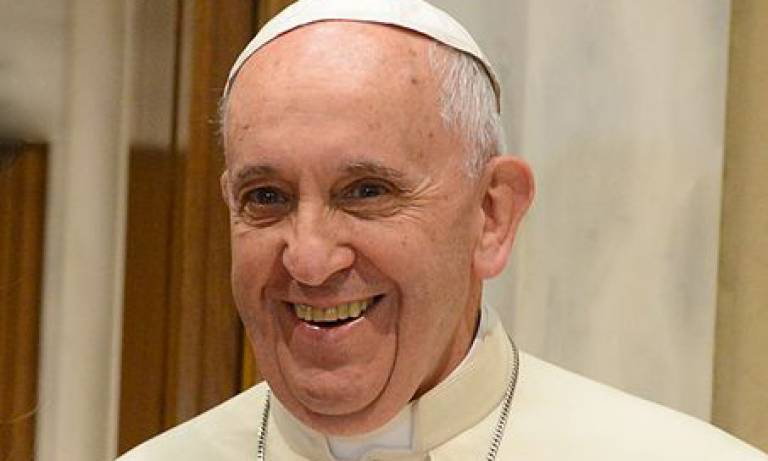 Dr Wild received the invitation in recognition of his research, clinical care and public engagement into HD; as one of a few specially selected guests, he will also get the chance to meet the Pope in person. He described feeling honoured to be invited:


" I am honoured to have been invited to take part in this historic event - the first time a Head of State has even mentioned Huntington's disease. It means a huge amount that Pope Francis has chosen through his papacy to fight the stigma surrounding rare and genetic diseases, especially for the Huntington's disease families from his homeland in Latin America, and to celebrate the potential of scientific research to help humanity and reduce suffering.

The event will be world's largest ever gathering of patients who are fighting HD, their community of carers and relatives, and aims to build awareness about this genetic brain disorder which is so far incurable and for which no disease-slowing treatment exists. Many families from South America, where HD has an especially high prevalence, will attend the event, which they hope will raise awareness and lift the stigma associated with the disease.

HD affects nearly one million people globally. Symptoms of HD normally present in mid-life causing cognitive, behavioural and motor decline. It typically begins with mild personality changes and progresses to inhibit body function including the ability to talk, walk and eat. The stigma associated with the disease has forced many of those affected to hide the disease for fear of public criticism, discrimination and unfair treatment.

Dr Wild will be accompanied by two members of the UCL HD Centre team - Desiree Salanio, our Huntington's disease clinical nurse specialist; and Lauren Byrne, a research associate whose family is also affected by HD.

The event will be live streamed by HDdennomore on their website on Thursday 18th May, 10.30 AM GMT.