Why the Global Citizenship Programme was more than I bargained for

What's it like to immerse yourself in a life story so different from your own? When I signed up for the cultural understanding strand for the

ucl.ac.uk/global-citizenship-programme" target="_self">Global Citizenship Programme - The Danube - I imagined attending some language classes and learning a few facts and figures. Little did I know how enriching and compelling my experience would really be.

Uniting under the banner of 'Team Hungary', I teamed up with students of all years and disciplines to learn(ish) the Hungarian language and to collaborate on writing, photography and video.

Our writing all contributed different interests: national food, Transylvanian history, highlighting who invented the Rubik's cube. For me, I let my passion for phonetics take over: I delved into the mystery of Hungarian pronunciation by writing an article in English using Hungarian spelling, "De meni ritten szaundsz of Hungárien". Most friends were puzzled; my Hungarian friends chuckled with delight.

What really made the experience special, however, was meeting Enikő Papp.

The heart of connection 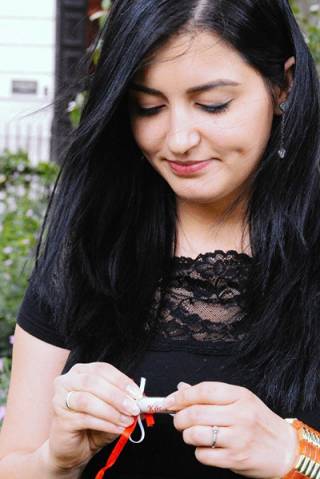 Part of our assignment as a group was shoot a documentary about someone who migrated from Hungary to London - but we had to locate them first. Finding a stranger sounded like a daunting task, let alone convincing someone to be photographed and videoed!

After four days of fruitless efforts - including unsuccessfully recruiting Hungarian waiters, retail assistants and Camden food market employees - we found Enikő Papp, a dental practice receptionist who was open to speaking with us.

If you had been with us on our first Friday morning, you would've been standing in front of her practice south of the British Museum - and would've witnessed her look of surprise when she saw so many of us eager to meet with her.

Getting to know Enikő was like opening the door to a completely different world unlike the privileged one I was raised in. She grew up in poor north-eastern Hungary in the small village of Kótaj. As she got older, her parents told her that she had to leave, for her own sake: she was smart, she was young, and she needed to go somewhere with opportunity - and if worse came to worst, she always had a place at home.

She came to London - and with it, undertook learning the English language through a baptism by fire. Year by year, she moved through jobs and up the ranks within them. Two years ago, she handed out invitations like the one in her hands in the picture - she got married.

Chatting with Enikő, I witnessed the brilliance and kindness of someone who, despite her initial struggles, worked graciously and tenaciously to create the life she wanted for herself. I connected to a story shared by many, yet seen by few. Her photo captures all this, and so much more.

After the initial meeting, we interviewed her in her home in Lewisham - right after getting lost, finding a Tesco, and taking the opportunity to buy flowers for her, of course.

The time we spent with her resulted in a good 16 hours of iMovie editing later, but it was all worth it. With my group, I realised the importance of meticulous post-production to capture the emotion of the experience, not just the words that were spoken.

Watch Enikő's story below, three minutes that I believe will leave you touched. We each have a story, yet how often do we get to listen to another's? We complain about procrastination and wanting to do what we want to do. Enikő taught me to connect with an energy of doing what needs to be done because it needs to be done. We can all learn from that.

Flowing towards the future

Being part of the Programme, I discovered how much I didn't know that I didn't know about the other side of our continent thanks to my Western Eurocentric upbringing. Now I stand in place where I truly feel that I can connect with people across all of Europe in a deeper, more meaningful way.

I love Hungarian more than ever. I knew I loved it, but now that I've embraced its culture, I am enamoured by the beautiful symbolism ancestrally locked into the language, such as their word for German, "német" - or "the mute ones" - loaned from the days when Slavic and Germanic tribes first made contact.

Now I feel that I want to become proficient in the language for its own sake, and for the sake of myself as an entrepreneur: one day, I want to run public speaking trainings in the heart of beautiful Budapest.

I entered the Global Citizenship Programme to avail of an opportunity. Instead, I found myself discovering a whole raft of new ones. It's running again next year - what could you get out of it?

Robert is a first-year undergraduate Psychology and Language Sciences student, and a student journalist for myUCL.